This is arguably the first superhero movie of the modern era, if you allow "modern" to mean "forty-four years ago as of the 10th of this month"; the tagline was "You'll believe a man can fly," and while the special effects are certainly fine, the real attraction is Christopher Reeve as Clark Kent/Kal-El. Wikipedia describes the casting process as one in which Reeve was dismissed at first for being too skinny while various A-list actors of the time were approached but turned it down while more muscular actors such as Arnold Schwarzenegger weren't even tested. Finally, Reeve was reconsidered and hired (pending his beefing up a bit), and it's one of the best non-intuitive casting decisions in superhero movie history; he's simply luminous as Superman, and hilarious as Kent, slapsticking his way across the Daily Planet office and around Metropolis. Margot Kidder is likewise perfect as his foil/love interest Lois Lane.

Stuff I wasn't as crazy about lo these decades hither: although I loved the design of Krypton (ditto the Fortress of Solitude growing out of a single crystal thrown into the Arctic), the destruction of the planet is a bit overlong. The three Kryptonian villains--Zod, Ursa, and Non--are in the very first scene, and then not seen again until Superman II. And, sorry, but I really didn't like this version of Luthor and his henchpeople. Gene Hackman, Ned Beatty, and Valerie Perrine have all done far superior work (in fact, Perrine got good notices for the recently-reviewed-here Lenny), but their execution of Lex's plan seems more of a testament to shoddy security around the nation's nuclear arsenal than to Luthor's genius. And, I know that this is pure Comic-Book-Guy nerdery, but giving Superman the ability of time travel at will just opens a can of worms that even he can't lift. But these are relatively minor quibbles for a handsome, fun, and charming movie. The "Can You Read My Mind?" scene pardons just about every quibble.

Oh, and if Elvis had lived to at least sixty or so, I'd have imagined him looking a lot like Marlon Brando's Jor-El.
posted by Halloween Jack (16 comments total) 9 users marked this as a favorite
For me, Lex Luthor's best moment in Superman is the end, when he whips off his wig, scowls up at the warden, and declares himself "Lex Luthor, the greatest criminal mind of our time." For one brief shining moment, we see the supervillian that Lex Luthor really is and that Gene Hackman could have easily played. But then Otis ruins the moment. Because in the movie Lex is just your run-of-the-mill swindler who surrounds himself with idiots.

But then, Superman/Christopher Reeve has his best moments of the movie, first with this exchange with the warden and then in orbit as he breaks the fourth wall.

Yeah, Superman is like that. As a whole, it's a fair movie that has held up. But it has its ups and downs.

Lex is just your run-of-the-mill swindler

Yes but that’s what (in hindsight) is so refreshing. He’s just a guy heavily invested in waterfront property in Nevada. Pretty much every current-ish superhero movie has The Fate of The World hanging in the balance. After a while, the viewer becomes blasé.
posted by TWinbrook8 at 6:27 AM on December 3, 2022 [1 favorite]

If given the chance to have a movie set for a home, I'd choose Lex's abandoned subway station with massive library and indoor pool every time.
posted by AlonzoMosleyFBI at 6:31 AM on December 3, 2022 [5 favorites]

This movie is full of fantastic parts, but the way it's stitched together is kind of lumbering and lurching. It's never less than fun, but the flow between sections is never as smooth as the sections themselves.

But man oh man, Christopher Reeve is the one true Superman.
posted by DirtyOldTown at 9:04 AM on December 3, 2022 [7 favorites]

The funny thing about Margot Kidder is that there was some complaint at the time that at 30 she was too old for the role. This, of course, tells us more about the Hollywood double standard than the quality of her performance.

I'm able to get past the time travel trick never seen again because a power that appears once and never comes up again is very much a silver age thing. (Comics were into the bronze age in 1978, but movies tend to lag a bit that way.) You might as well ask why he never uses super hypnosis for anything but protecting his secret identity.
posted by Karmakaze at 9:24 AM on December 3, 2022 [2 favorites]

I was 10 when this came out, probably the exact perfect age to first encounter this movie.
posted by supermedusa at 9:39 AM on December 3, 2022 [2 favorites]

There are screen tests of Stockard Channing for Lois Lane, reading a scene from Superman II at the Niagara honeymoon hotel. (I and II were shot concurrently.)

It's a look into another way the role could have gone, a bit more His Girl Friday.
posted by DirtyOldTown at 11:37 AM on December 3, 2022 [4 favorites]

DOT: "Christopher Reeve is the one true Superman"

AMEN. One of the best casting decisions in Hwood history.

As for the overall movie - obvs not as "fun" as the sequel - and the time-travel bit even left me as a 12-year raising an eyebrow - but WOW was it amazing. And I was kind of "meh" on Lois Lane initially, but Kidder's performance over the years has really grown on me.
posted by davidmsc at 7:40 AM on December 4, 2022 [3 favorites]

I love this movie unconditionally and I love that it's really three movies which makes it feel you're reading three runs of a comic book. Donner said that he intentionally shot each of the three parts in different styles and they do play that way.
posted by octothorpe at 8:05 AM on December 4, 2022 [3 favorites]

I believe the time travel ending was meant for the sequel, not this movie.

Richard Donner was shooting both films at once and got fired most of the way through. Certain elements got rearranged. Donner's director's cut of II ends with this scene.
posted by DirtyOldTown at 8:07 AM on December 4, 2022 [1 favorite]

One of my film school professors was a PA on this movie early in his career, mainly in the Smallville part. His name is on one of the tombstones in the Smallville cemetery. (Typical practice. They can’t just use random names because someone with that name will turn up with lawyers. So the names are typically crew members who have signed releases.)

He talked a lot about the practical effects. Like the football that Clark kicks for miles was actually made of wood and was fired by a compressed air cannon buried in the ground. He had a lot of fond memories of this. Movie. (Though none involved Glenn Ford, about whom he had nothing nice to say.)
posted by Naberius at 1:47 PM on December 4, 2022 [3 favorites]

Can someone involved with or knowledgeable about the production please explain Jeff East's (Smallville Clark's) nose makeup? It's always bothered me, and I don't understand what they were going for.

Also stuck with me is the now-racist 'late 70's street pimp' cameo, himself 'pimped out' in attire, being the first to see a man step out on the street wearing blue tights, a yellow belt, red go-go boots and a cape. Then fly away.

Also immortalized, to the point that they seamlessly transferred the character (via the yell) into the Supergirl TV series decades later:
Miss Tessmacher!!!
posted by bartleby at 6:59 PM on December 4, 2022 [3 favorites]

It's always bothered me, and I don't understand what they were going for.

I believe it is an analog attempt to make East’s face be a better match for Reeve’s. Certainly East’s dialogue has been overdubbed by Reeve.

Young audiences might find it baffling how in the pre-CGI era, we had to resort to such crude tactics.
posted by ricochet biscuit at 7:19 PM on December 4, 2022 [1 favorite] 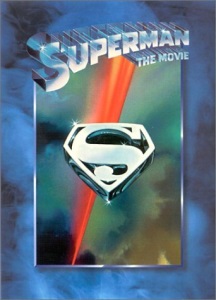