Clark Kent meets up with some people from the old hometown, but the reunion isn't a happy one.


This movie may have had more drama behind the camera than in front of it. About 75% of the sequel was shot at the same time as Superman, and the original plan was to finish them both at about the same time, in the manner of Avengers: Infinity War/Endgame. But, production was halted to finish work on the first film, and before filming could resume on the sequel, director Richard Donner was fired due to conflicts with producer Pierre Spengler, and he was replaced with Richard Lester, a friend of Donner's who had directed the Beatles in A Hard Day's Night and Help!, among other things. Lester re-shot much of the footage that had already been completed, in order to get the director's credit; there's a lot of info on that in the Wikipedia article. (Eventually, Donner was able to release a version of the movie that was closer to his original vision, using some of Lester's footage and even some footage of Reeve and Kidder's original screentest, under the title Superman II: The Richard Donner Cut; yes, many years before #ReleaseTheSnyderCut...)

I feel about this movie the way that I felt when I saw it on its first release: I like it better than the first one. The slapsticky bits don't appeal to a lot of people, but I think that there's a seriousness underlying it that justifies the goofier scenes; the movie is really about Clark and Lois taking their relationship to the next level, and what Clark will have to give up in order to make that work. The villains are also better; again, they have their funny moments, but at their core they are very much not fucking around, and you get the feeling that Zod, particularly, with Terence Stamp's best icy glare, would burn the entire planet down to the magma just to get the son of Jor-El to kneel before him. Even Luthor gets a better turn here; first Otis and then Miss Teschmacher drop out of the film, and he's up against three incredibly powerful and ruthless people, and you can see him wrestling his own ego down under the threat of one of them turning him into a charcoal briquette. But my favorite scene is a bit less than halfway through the film, when Lois confronts Clark with irrefutable evidence of his invulnerability; he does a slow turn, and you can see both the weight of his decision as he takes off the glasses in front of her, and a sheepish sort of relief as he comes out of the phone booth, as it were.

If someone else wants to review the Donner Cut, I think that it would warrant a separate entry. (I watched part of it and wasn't that impressed, but I might change my mind on that.)

Richard Donner's obituary thread on the blue, with many reflections on these and other films.
posted by Halloween Jack (9 comments total) 4 users marked this as a favorite
I very much enjoyed this film when it came out, and while I'm sure some bits haven't aged well, there was only one moment that stood out as a out of place to me: when Kent goes back to the diner with his powers to beat up the trucker; it seemed a mean, petty thing for Superman to do.
posted by nubs at 7:38 PM on December 4, 2022 [2 favorites]

I mean I really loved this. I rewatched it a few years ago and I'd forgotten how much stupid stuff there was in it.

Stamp as Zod still shines though. "Very much not fucking around" is the great way of phrasing it. Zod's hate is such a tonal clash for the slapstick that maybe there's some chemistry there. Zod also hates how stupid Earth is. It's like when you're a kid and you and your siblings are getting silly and pissing Dad off but that just makes it more exciting.
posted by fleacircus at 11:12 PM on December 4, 2022 [3 favorites]

nubs: Yeah, that scene really sticks out all these years later. But the original beat down is so heart-breaking, and Reeve so charming with his "I've been working out" shtick that the movie almost gets away with it.
posted by Saxon Kane at 12:16 AM on December 5, 2022 [1 favorite]

I was fine with the theatrical release until I saw the Donner Cut version. Since then, I just can't abide some of the over the top comedy elements.
posted by wierdo at 4:57 AM on December 5, 2022

So what you’re saying is that a superhero movie becomes incredibly successful specifically because the director expurgates any camp elements and has everyone play it sincere, but then another director comes on to the series and bends over backwards to reintroduce camp, and eventually ends up ruining the franchise?
posted by 1970s Antihero at 5:17 AM on December 5, 2022 [2 favorites]

But the original beat down is so heart-breaking, and Reeve so charming with his "I've been working out" shtick that the movie almost gets away with it.

And 100% gets away with it! He didn't do any permanent damage to the idiot - just basically humiliated him, rightfully!

And yes - there is so much to love about this, and a few meh moments - but having villians that are LEGIT villians, compared to the first movie's Lex Luthor as a wannabe criminal mastermind with a bumbling oaf as an assistant - makes this movie really shine. Zod and Ursa are absolutely terrifying.

But Hackman's Luthor is awesomely funny near the end, trying to weasel into a deal - and Superman's "TOO LATE, Luthor - too late" is awesome.

And that wraps up the "Reeves as Superman" movies, because there were no sequels after this one.
posted by davidmsc at 9:38 AM on December 5, 2022 [9 favorites]

Superman II isn't terrible. It has its moments. The diner scenes are classic. And the end when Superman apologizes to the President for being away and promises not to let the country down again before warmly looking up at the Red, White, Blue, is II's best moment.

But II just isn't as good as Superman TM. And it also establishes a few of the cliches that superhero franchises would fall back on in the coming decades, such as that in the first sequel, the superhero must already be looking for an exit from his superhero career.
posted by Stuka at 3:17 PM on December 5, 2022

So far I’m preferring the Richard Donner version. The reduced slapstick, the lack of pointless opening “previously on” montage, the tightened pacing, the additional scenes with Marlon Brando. But really who am I kidding. I’m just into the new shots of Terence Stamp. He’s the cat’s meow. 14-year-old me in 1980 was completely enamored. Gene Hackman is always a hoot too.

But I never saw any of the two subsequent sequels and maybe I wasn’t missing anything. But damn Nuclear Man is a weird hottie.
posted by computech_apolloniajames at 5:31 PM on December 6, 2022

Ok, now that I’ve seen the ending, all I can say is SUPES, this is how you get a multiverse!”

But honestly he did the backwards time redo again? That was kinda dumb. Did nobody notice? Where did Zod et al go? Presumed dead or back to the Phantom Zone?
posted by computech_apolloniajames at 9:18 AM on December 7, 2022 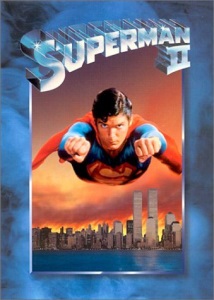