[TRAILER] When the idealistic young Jefferson Smith (James Stewart) winds up appointed to the United States Senate, he gains the mentorship of Senator Joseph Paine (Claude Rains). However, Paine isn't as noble as his reputation would indicate, and he becomes involved in a scheme to discredit Smith, who wants to build a boys' campsite where a more lucrative project could go. Determined to stand up against Paine and his corrupt peers, Smith takes his case to the Senate floor.

Directed by Frank Capra. Screenplay by Sidney Buchman, with uncredited contributions by Myles Connolly. Based on Lewis R. Foster's unpublished story, "The Gentleman from Montana." Music by Dimitri Tiomkin.

Widely available for digital rental. JustWatch listing.
posted by DirtyOldTown (4 comments total) 1 user marked this as a favorite
I definitely thought that watching this pre- and post-Watergate were two very different experiences.
posted by EmpressCallipygos at 12:07 PM on January 19 [1 favorite]

The idealism and optimism in this film are heartbreaking now.

The very idea that as soon as people hear an impassioned argument for what it morally right, they'll come around...

Oof. Great film, but naïve to the point of pain. Of another era, I guess.
posted by DirtyOldTown at 12:44 PM on January 19 [7 favorites]

Is this movie peak Capra? It's hard to think of a better exemplar of what came to be known as "Capraesque".
posted by Nerd of the North at 10:24 PM on January 19 [2 favorites]

It's hard to think of a better exemplar of what came to be known as "Capraesque".

Mr. Deeds Goes To Town?
It's A Wonderful Life?
posted by EmpressCallipygos at 7:43 AM on January 20 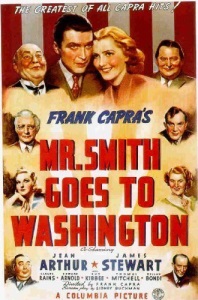