[TRAILER] Megan Davis (Barbara Stanwyck) arrives in China to marry Dr. Robert Strike (Gavin Gordon), her missionary fiancé. The Chinese Civil War interrupts their wedding plans, and the couple is separated while trying to save endangered orphans. Chinese warlord General Yen (Nils Asther) rescues Davis after she faints but subsequently holds her captive, persistently attempting to seduce her. Surprisingly, though, Davis becomes attracted to Yen and develops a sympathy for his embattled position.

Directed by Frank Capra. Screenplay by Edward Paramore, based on the 1930 novel by Grace Zaring Stone.

There are only eight reviews on RT, though all positive. The film has produced different viewpoints in recent years. Kevin Lee, writing in Senses of Cinema, notes that with changes in racial and sexual conventions, film scholars have objected to its Orientalism and white actors portraying Asian characters. Lee grants these objections but argues that for "those who are willing to plough beyond these surface reactions, what's left is a film that weaves an elaborate web out of competing cultural perceptions, social and religious values, and sexual desires." What Lee finds of values is that the film "risks offence for the sake of constructing a dialogue, one fraught with so many perils in the realms of politics, religion, cultures and sex, that it would not be worth it if it weren’t necessary."

If it sheds any light on how the film fit into its time, racists hated it and staged boycotts.

Currently available for digital rental in the US. JustWatch listing.
posted by DirtyOldTown (2 comments total)
There's another theory about why a Caucasian man was cast as General Yen: Capra may have been scared that audiences wouldn't have been able to handle the romantic scenes if they were "interracial", and was trying to get around that by casing Nils Asther so people could tell themselves that "oh, they're both really white so it's okay". (Didn't really work - this was apparently the very first film screened at Radio City Music Hall and they had to pull it after only a week.)
posted by EmpressCallipygos at 12:20 PM on January 19 [4 favorites]

Thanks, DirtyOldTown, I watched this last night and was happy to find it quite watchable. Surprising to me: at 26, Stanwyck barely registers here; she's blandly pretty, without the strong character I've come to associate with her face.

Much is left to the imagination in this interracial love story. For instance, the loquacious general's talk is often met by Stanwyck's character with long, thousand-yard stares when you'd really like to know what she's thinking.

Here's a 12-year old blog post about Nils Asther, who plays the general, supporting EmpressCallipygos's above comment, to include an excerpt from Capra’s 1971 autobiography about his casting decision for the picture.
posted by Short Attention Sp at 3:34 PM on January 21 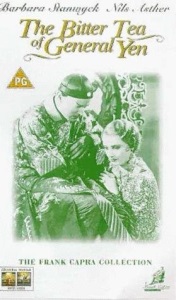