[TRAILER] Longfellow Deeds (Gary Cooper), a resident of small-town Vermont, leads a simple life until he inherits a vast fortune from a late uncle. Soon, unscrupulous lawyer John Cedar (Douglas Dumbrille) brings Deeds to New York City, where the unassuming heir is the object of much media attention. When wily reporter Babe Bennett (Jean Arthur) gains the trust and affection of Deeds, she uses her position to publish condescending articles about him -- but are her feelings for him really that shallow?

Directed by Frank Capra. Screenplay by Robert Riskin, based on "Opera Hat," a
1935 story in American Magazine, by Clarence Budington Kelland.

Currently available for digital rental in the US. JustWatch listing.
posted by DirtyOldTown (4 comments total)
This scene here still makes me laugh.
posted by EmpressCallipygos at 1:08 PM on January 19 [1 favorite]

Also - this story was so predictable that I got only a couple sentences into describing the plot to a co-worker after watching it, and he correctly guessed every other element of the plot. But...I was okay with that, even though I usually don't like "predictable plots".

(And the only thing I liked about the remake was the Dave Matthews Band song they used in it.)
posted by EmpressCallipygos at 7:47 AM on January 20

There is no remake. I do not know what you mean.

Oh I love this movie. The chemistry! The radical message! The manic pixie boyfriend! Gary Cooper before the westerns! I mean, he’s so dreamy.
posted by Isingthebodyelectric at 11:28 AM on January 21 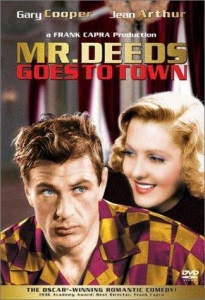