[TRAILER] A romantic comedy that brings together three disparate characters who are learning to face a challenging and often confusing world as they struggle together against a common demon: sex addiction.

Although not critically well-received (50% at Rotten Tomatoes), "Thanks For Sharing" attempts to take on a problem that's rarely addressed and (mostly) hits its mark well. Some of the comedy is a little too broad, and we never really feel the chemistry between Ruffalo's and Paltrow's characters, but those flaws are offset by the movie's willingness to really look at the particulars of an addiction that's not like many others. The performances are generally all good, with Alecia Moore's raw portrayal of Dede especially called out (positively) by critics.

Available for rent, purchase, and (free with ads) streaming in the US. JustWatch listing.
posted by hanov3r (2 comments total) 1 user marked this as a favorite
A few years back, I posted a number of comments in various MeTalk "Fucking Fuck" threads about my struggles with recovery from my process addiction of choice. This movie hits very personally and I realized last night that I needed to watch it again. I absolutely recognize a bunch of archetypes, folks that I've met in rooms a lot like those portrayed in the film. It feels like the writers have been in those rooms, too - they captured the language of recovery perfectly.
posted by hanov3r at 8:11 AM on January 20 [3 favorites]

I put this movie on DVD and Blu-ray oh so many years ago. My ex-wife assisted with the QA process on the title, and expressed her opinion that addictions in general and sex addiction in particular weren't diseases. Four years later... well, addiction is a disease I didn't want to catch, but it's also a disease I didn't try to get better from for five full years.

I should watch this again (well, really watch it for the first time—I only programmed it back in the day).
posted by infinitewindow at 4:05 PM on January 20 [1 favorite] 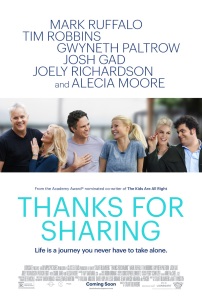