[TRAILER] Initially set on being a dairy farmer, the aristocratic Karen Blixen (Meryl Streep) travels to Africa to join her husband, Bror (Klaus Maria Brandauer), who instead spends their money on a coffee plantation. After discovering Bror is unfaithful, Karen develops feelings for hunter Denys (Robert Redford), but realizes he prefers a simplistic lifestyle compared to her upper class background. The two continue on until a series of events force Karen to choose between her love and personal growth.

Directed and co-produced by Sydney Pollack. Screenplay by Kurt Luedtke. Based on Out of Africa by Isak Dinesen, as well as additional sources, including Isak Dinesen: The Life of a Story Teller by Judith Thurman and Silence Will Speak by Errol Trzebinski. Music by John Barry.

Currently available in the US via digital rental. JustWatch listing.
posted by DirtyOldTown (3 comments total)
The only thing I remember from this film is seeing Michael Kitchen regularly smile and laugh. Being a devoted fan of "Foyle's War", I had thought that was nearly impossible.
posted by AlonzoMosleyFBI at 4:00 AM on January 24 [1 favorite]

I read Elspeth Huxley’s memoir of that period, The Flame Trees of Thika, so when Bror admitted he’d impulsively bought a farm to grow coffee, my first thought was: uh oh, five years until maturity. I’m pretty sure Elspeth makes an appearance in the movie, the young girl riding up on a horse and calling out, “hello the house”? which is how people announced themselves back then.
posted by TWinbrook8 at 2:24 PM on January 24 [1 favorite] 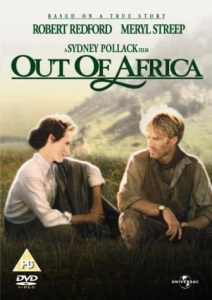