[TRAILER] Victorian-era Englishman Phileas Fogg (David Niven) proclaims before his fellow members of a London gentleman's club that he can circumnavigate the globe in a mere 80 days, further boasting that he will bet the princely sum of 20,000 pounds on the success of his endeavor. With his stalwart manservant Passepartout (Cantinflas) alongside, he goes forth on his adventure, pursued by a dogged Police Inspector (Robert Newton) who suspects Fogg of chicanery.

Currently streaming in the US on HBO Max. JustWatch listing.
posted by DirtyOldTown (3 comments total)
This one and The Great Ziegfeld (also posted today) are good examples of how sometimes the Academy awards stupidly expensive movies that spend their money well. It's still kinda fun, though.
posted by DirtyOldTown at 12:43 PM on January 23

As a reminder, there are no balloons in Jules Verne's Around the World in 80 Days.
posted by SPrintF at 1:18 PM on January 23 [1 favorite]

Watched this a few years ago for the first time and found it very colorful but mostly pretty boring and more than a little racist.
posted by octothorpe at 7:32 PM on January 23 [1 favorite] 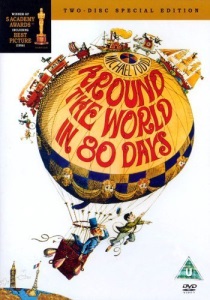