Why Harold Ramis's 'Groundhog Day' is the Perfect Guide to Life: It’s a tale that acknowledges the eternal struggle we all wage with time, but also the even greater one we fight with ourselves. It asks, with expansive humor and fun, the most defiant, terrifying question of all. What’s holding us back in life? Is it really just the clock?

Roger Ebert Revisits It: His journey has become a parable for our materialistic age; it embodies a view of human growth that, at its heart, reflects the same spiritual view of existence Murray explored in his very personal project "The Razor's Edge." He is bound to the wheel of time, and destined to revolve until he earns his promotion to the next level.

Groundhog Almighty: Some theologians see much less Buddhism in the story than Judaism. Dr. Niles Goldstein, rabbi of the New Shul congregation in Greenwich Village and author of ''Lost Souls: Finding Hope in the Heart of Darkness'' (Bell Tower, 2002), said he finds Jewish resonance in the fact that Mr. Murray's character is rewarded by being returned to earth to perform more mitzvahs -- good deeds -- rather than gaining a place in heaven, which is the Christian reward, or achieving nirvana, the Buddhist reward. He has not used the movie as an allegory for his congregation, he said, but he might now.

Why Did Bill Murray Keep Going Back?

Just How Long Was Phil Connors Stuck in a Time Loop?
posted by MoonOrb (15 comments total) 13 users marked this as a favorite
I'm looking forward to seeing this exact post being made daily for at least a week
posted by DoctorFedora at 1:46 AM on January 31, 2015 [5 favorites]

This is probably my favorite Bill Murray movie (Lost in Translationa close second.) I think what makes it so great to me is that there is no explanation for what starts the time loop. It just starts. Lesser filmmakers would have some cheesy scene where Phil gets cursed or something lame. But this movie respects its audience enough to let them take the journey with the main character. It's really quite special.

Also, when the cops pull them over for driving on the train tracks and the drunk townie wants to get in on the food order with some flapjacks.
posted by dogwalker at 11:41 AM on January 31, 2015 [3 favorites]

There was a scene in the original script where Murray's character is cursed by an ex-girlfriend. It was Harold Ramis who had that removed and left the nature of the curse to the viewer to consider.
posted by Servo5678 at 2:31 PM on January 31, 2015 [2 favorites]

It makes me think of this wordplayer column, where the message is "Hey, Studios! Stop telling us to explain all the rules right up front!"

I often find myself internally exclaiming "Ned? Ned Ryerson?!" when I see a puddle by the side of the road. This movie is so amazing.
posted by sockermom at 7:30 PM on February 1, 2015 [3 favorites]

A movie so good, Andie Macdowell couldn't ruin it (for comparison, she totally drags down Four Weddings). The fun thing about this film is that it isn't terribly clear how many time loops there are. There was a theory that there are as many as there are shown on screen, although that would seem to contradict some of Phil's claims; primarily though the only one that is necessarily impossible in the time frame allowed is the card trick, but maybe Phil had been practising it pre-time loop.

A film where someone gets stuck in a time loop for an extremely long time could get very dark, and the film does nod to that with the suicide sequence, although tonally the film sort of tries to get away with making that as light hearted as it can, so as not to drag down the film too much.

The plotting of it is very clever, by having snow coming down it means Phil can't spend his day outside the town, so is sort of forced to focus on self improvement if only by default. I do wonder how he will cope outside the loop, having spent at least several years doing the same day again and again and again.
posted by Cannon Fodder at 12:09 AM on February 2, 2015

That doesn't seem to make sense at all, considering stuff like learning to play the piano.
posted by smackfu at 6:45 AM on February 2, 2015 [1 favorite]

Groundhog Day Succeeds by Breaking the Rules of Every Genre
posted by the man of twists and turns at 7:32 AM on February 2, 2015 [2 favorites]

One draft of Danny Rubin's script suggested that Phil was locked in the time loop for over 100 years (maybe even as high as in the thousands).
posted by stennieville at 12:18 PM on February 2, 2015

In at least one version of the screenplay, he would read a little bit every day in the library and they would have showed him sad on the day he read the last page in the last book.
posted by ROU_Xenophobe at 1:21 PM on February 2, 2015 [1 favorite]

I watched this a couple weeks ago with my daughter. It's funny, it came off as a little slow by today's standards. I also found the Andie MacDowel part really annoying: what exactly is he attracted to? Her character is never established. He could have glommed on to any woman in the town and manipulated her just as well.

Having said that, I still thought it was a brilliant movie and kind of an advertisement for buddhism. By letting go of attachments, he becomes much more deeply invested in life. Also, it preaches that anything can be achieved with practice, and that anything that is meaningful comes from practice.

Groundhog Day Succeeds by Breaking the Rules of Every Genre

I liked most of that article, but I don't totally agree with it. Particularly, "We have a spiritual movie that never tells us why the hero gains his redemption." No, it doesn't explicitly spell out why Phil gets his redemption, but a) that doesn't mean it's unclear to the viewer, and b) the movie is hardly unique in that regard.

The article itself gets why Phil is redeemed, and says as much in the penultimate paragraph:

We see that Phil has changed by how he spends his day helping the people of Punxatawney. He can’t save Pops, but he can make his last day a little warmer. ...Winter itself is transformed, because he’s learned to look at it differently, and Phil has become a new person.

Does the movie explicitly say that Phil has to be transformed to escape his time loop? No. Is it clear to the viewer? Yes.

And it's hardly the only redemption movie that doesn't explicitly state its redemption. Even in It's a Wonderful Life, which the article references multiple times as a more traditional redemptive movie, Clarence never explicitly tells George he has to change his mind about his imminent suicide. Perhaps because George's "I want to live!" is so clearly the redemptive moment does Schnelbach forget that it was never spelled out as a condition for redemption.

But the points about it being unusual as a time loop movie, and as a rom-com, are well taken.
posted by DevilsAdvocate at 4:32 AM on February 3, 2015 [2 favorites]

The interesting thing about Phil's redemptive arc is that it seems incredibly gradual. He has obviously saved the kid who falls out of the tree many times. What was it about this go around that passed muster? Is it that Rita chooses to be with him, signalling that he's become worthwhile as a human being. So Rita is the arbiter of his soul?
posted by dry white toast at 12:03 PM on February 3, 2015 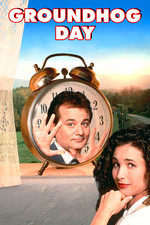