Nada, a wanderer without meaning in his life, discovers a pair of sunglasses capable of showing the world the way it truly is. As he walks the streets of Los Angeles, Nada notices that both the media and the government are comprised of subliminal messages meant to keep the population subdued, and that most of the social elite are skull-faced aliens bent on world domination. With this shocking discovery, Nada fights to free humanity from the mind-controlling aliens.


Rolling Stone, Empire of the Sunglasses: How 'They Live' took on the Republicans and won: Plenty of films since Carpenter's have come down hard on Reaganomics; it's almost too limiting of They Live's stealth power to call it a political screed. Far more adventurously, this is a thriller — a mass-consumable entertainment — that tries to reprogram its audience into anti-consumers. Everything we watch in a theater asks us, to some degree, to see the world as it does. But They Live literalizes that idea, forcing the shades on us to display a wholly different perspective.

theofficialjohncarpenter.com: They Live asks us to take another look at the world we are creating and drives home the point of what the future may hold for all of us. Principal photography for They Live began on March 7th, 1988 on location in Los Angeles. The film addresses the issues of the homeless in our country, social irresponsibility, mass consumption, environmental destruction, corruption, the attractiveness of our capitalistic society and the incredibly strong influence of the communications media.

Slant Magazine: This, of course, was 1988, a year after Paul Verhoeven's RoboCop had proven that an intelligent film could both be an action film and a critique of action films. Carpenter was in many ways picking up where Verhoeven had left off, taking his flair for pyrotechnics to its logical extension and pushing his film's pointed social critique right down to the level of sly auto-critique as well. What's the infamous six-minute wrestling match at the heart of They Live if not the ultimate fulfillment of its audience's primal bloodlust, shoving our faces into the muck of pop culture?

The A.V. Club, The New Cult Canon: They Live: Keep in mind, that epic brawl happens solely because Frank refuses to put on a pair of sunglasses—sunglasses that have been offered to him by a friend, no less. And that underlines one of Carpenter's satirical points: People are so reluctant to change that they'd rather embrace the falsehood of their existence than act on the truth. There's some of that sentiment earlier in the film, too, when shantytown-dwellers groan at the rebel transmissions that interrupt their regularly scheduled programming. The underground resistance aims to destroy "the signal," which buries the truth in a consumerist overlay (a Matrix, if you will), but what happens if they succeed? Will revolution follow, or will humanity just slouch back into complacency?

I have come here to chew bubblegum.
posted by MoonOrb (14 comments total) 10 users marked this as a favorite
This is one of the best movies ever and if I have to start an interminable fistfight with you in an alley to get you to see that, I am willing.
posted by DirtyOldTown at 7:38 PM on February 25, 2015 [14 favorites]

I watched this most recently a year ago, and I was struck by the pacing – so slow compared to modern films. That and how refreshingly anti-corporate, anti-control, and anti consumption it was, like THX-1138 but aimed at regular folks.

I would pay money for a Joss Whedon scripted and directed reboot, I suspect.
posted by zippy at 8:00 PM on February 25, 2015 [2 favorites]

Everything about this movies rules, right down to Carpenter's amazing knack for scoring his own work.
posted by Pope Guilty at 8:22 PM on February 25, 2015

I will admit that the last act feels really half-assed and dashed-off, but the first hour is sooooooooooooooooooo gooooooood.
posted by DirtyOldTown at 8:25 PM on February 25, 2015 [2 favorites]

It's so memorable that even though it's been 20+ years since I saw it, I still understand the shorthand in an image like this immediately.

I think I assumed when I saw it in college that movies like that would be around every few years. Boy, was I wrong.
posted by mark k at 8:57 PM on February 25, 2015 [2 favorites]

Yesss, thanks for posting this. This was my suggestion for the Constructed Reality film club. I'll have to rewatch it and comment here later.
posted by isthmus at 9:02 PM on February 25, 2015

Incidentally, calling Piper's character "Nada" comes from the credits -- he is never referred to by name in the entire movie.
posted by Etrigan at 3:32 AM on February 26, 2015 [2 favorites]

One of my favorites of all time. So much in it is so simple in its little side meanings. Seeing the real world hurts and it's less bright and exciting than the fake one, for example. Good use of some Hero's Journey tropes - the mysterious origin, the call, the rejection of the call by others...
posted by phearlez at 9:50 AM on March 1, 2015

So many things to love about this movie, the interminable fist fight mentioned above being one of the highlights.
posted by Librarypt at 8:13 AM on March 4, 2015

Without too many spoilers, all I can say is that if you like They Live, and you also like fart jokes, you should probably play Saint's Row 4. Which stars Keith David as himself and also vice president of the US.
posted by ROU_Xenophobe at 9:17 AM on March 4, 2015 [5 favorites]

John Carpenter Is Fighting With Internet Nazis Over His Cult Classic They Live
posted by Etrigan at 12:16 PM on January 4, 2017 [1 favorite]

I lived in LA when this movie was being filmed and I remember seeing the billboards (Obey Consume) on Sunset Blvd and thinking it was some kind of performance art. A week or two later my ex came home with a story about being shoed away from a downtown news stand where all the magazines were covered with white paper adorned with black text (Do Not Question Authority). We loved the movie and were so psyched to finally have an explanation for our strange sightings.

Anyway, I think about this movie a lot, especially given today's GOP and Trump. They live; we sleep,
posted by carmicha at 7:14 PM on February 21, 2018 [2 favorites]

It's so memorable that even though it's been 20+ years since I saw it, I still understand the shorthand in an image like this immediately

Maybe you meant to imply this (in which case, sorry!) but part of the reason that works is that Shepard Fairey, who produced the original “Hope” image, was directly inspired by They Live, and took his “OBEY” catchphrase from the film.

I love this movie and I really enjoy the LoFi 50s SciFi vibe when the glasses are on. (I also like the Reagan is acknowledged as an alien during the “Morning in America” speech in the store.)
posted by chappell, ambrose at 9:56 AM on April 17, 2018 [1 favorite] 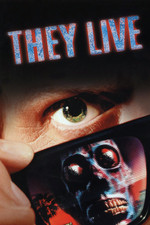