2003. With Robert Durst on trial in Galveston, TX for the 2001 murder of Morris Black, many of those involved in earlier investigations – including Westchester DA Jeanine Pirro and Kathie Durst friends Gilberta Najamy and Eleanore Schwank – are convinced that a conviction is all but assured.


Instead, Durst’s attorneys, led by ace lead counsel Dick DeGuerin, surprises the court with an unlikely first witness and a brilliant self-defense strategy. Dramatic footage from the trial, combined with revealing recent interviews with Robert Durst, punctuate the courtroom drama that led to a starting verdict.
posted by We had a deal, Kyle (4 comments total) 1 user marked this as a favorite
Holy shit the ending of this, Durst practicing his denials accidentally caught on tape.

It feels to me like the interview segments are each episode holding a few beats longer on Durst's telltale blinking: that face-on camera angle is very unflinching and unrelenting. (And as joseph conrad noted: quite Errol Morris-ey.)
posted by We had a deal, Kyle at 12:04 PM on March 16, 2015 [2 favorites]

Yeah, I was really surprised to see he even brought a lawyer to the interview. How the fuck could allow your client to do this? Or, perhaps it was just a case of "he wants to go to fucking jail?!?!?!, whatevs, his money is good".

I also like the fact the lawyer was wearing True Religion jeans or similar.
posted by sideshow at 12:31 PM on March 16, 2015 [3 favorites]

The waiting as Durst practiced denials bit was what an example of what first led this series to stand out for me. You feel as if you're going along in the investigation with the filmmakers. "Serial" was explicitly about being let into the world of investigative journalist. But this is qualitatively different. You're not always being told in detail that such-and-such was being interviewed and why. At times it seems like a straightforward doc, although a modern, slickly produced one done in Errol Morris-influenced style.

Finally watched this series. This was a frustrating episode. Even knowing that he couldn't have been convicted since he wasn't being interviewed in prison it was still frustrating seeing the case unfold. I felt like I could have mounted a better prosecution than they did. I get how difficult it must be to convict someone when there aren't any witnesses and they claim self-defense and they have fantastic lawyers. It seems to just come down to how likable the defendant is.
posted by Green With You at 10:03 PM on January 2, 2016 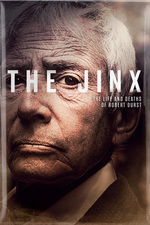