Saganshougen Nagamitsu is going to be Big, as you can tell because he sings and has a posse. His goal: defeat Mariya Enshiro's bespectacled murderer, Jin. Except he doesn't know what Jin looks like without his glasses, so when Jin pawns his glasses, and he almost gets side-tracked trying to woo Fuu. Meanwhile, Mugen and Jin run into Budoukiba, a sultry lady who likes to pair her wine with men who can hold their own against her when drinking.

There are some great details and anachronisms (palanquins are only for people of real distinction, and he can't wear purple unless he's actually royalty, which is doubtful, plus some notes for the sharp-eyed viewers who note the lollipop and skull-and-crossbones wristband) and more detailed episode information from a fansubber, if you want to really understand all the details seen and heard.
posted by filthy light thief
« Previous Episode  |   Next Episode »
« Older Star Trek: I, Mudd...   |  The Slap: Ritchie... Newer » 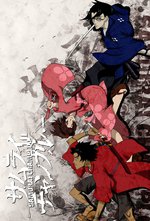