Gene starts a band with Tina, Louise, Regular Sized Rudy, and Peter Pescadero (and later Darryl), only to be kicked out (oh, and Tina and Louise are out, too). After declaring that he will never play his Casio again, Tina and Louise join forces to help Gene rediscover his love of music. Meanwhile, Linda deals with a horrible armpit rash and the resulting growth of her armpit hair.

Burger of the Day
"If you've got it, croissant it Burger"
"Chile Relleno-You-Didn't Burger" (First Burger of the day to feature twice, appeared previously in Two for Tina, S03E17)
"Parm-pit Burger" - Comes with Parmesan
"Scent of a Cumin Burger"

Behind BOB'S BURGERS Live episode 8 includes some unused rough footage and alternate characters, plus some comments from this episode's writer and director on making this episode.
posted by filthy light thief (7 comments total) 3 users marked this as a favorite
This isn't the newest episode, but it wasn't up on FF, and I loved Gene's view of the Itty Bitty Ditty Committee (1, 2, 3, 4, 5, 6, 7, 8, 9).
posted by filthy light thief at 8:03 PM on May 4, 2015 [1 favorite] 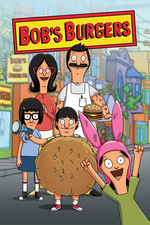