The green light is given, and Esterhase's team moves in on Grigoriev. Will he help them unlock Karla's secret? Can George finally bring down his nemesis and redeem his career, his Western values, his very being? This is George Smiley's last chapter.


George Smiley is temperamentally incapable of triumph.
posted by carsonb (3 comments total)
I thought Grigoriev an enjoyably well-fleshed-out character: at once lecherous and henpecked; perceptive but foolish. I enjoyed how Toby just about manages to keep a straight face when he requests a British Army uniform.

There’s yet another alias for George: Herr Professor Lachmann.
—I appreciate your kindness, Herr Lachmann, but I know that you’re an extremely dangerous man [...] you represent the forgiveness of the authorities. Are you God?
—No, I am just an ordinary person.

Tatiana’s remark ‘People should not attempt to change history. It is the task of history to change people’ might readily be rephrased ‘…in Soviet Russia, history makes you.’

George lights a cigarette before writing his letter to Karla: the only time, I think, we see him smoke one of his own. To the voiceover when George is writing the letter ‘You caused the murder of two men’ I would have added ‘and one small dog.’ The concluding lines of the letter are striking ’You have placed love above duty. The ground on which you once stood is cut away. You have become a citizen of no man’s land.’ What pen was George writing with? Apparently it might be a ’70s Mont Blanc 221.

‘Berlin, Thursday night: it’s on.’ Considering all the location filming in Paris, Hamburg, Lübeck, Berne & Thun, I was surprised to learn that the Berlin bridge scenes were filmed at Lady Bay Bridge in Nottingham. I suppose they couldn’t have very well filmed at an active checkpoint while the cold war was still going on.

When Guillam sees Karla coming and says ‘George, quick,’ George looks sick with anxiety and, rather then see for himself, takes his glasses off. I liked Strickland’s line shortly afterwards: ‘We’re hoping that the package will be along very shortly sir - the van has left the warehouse…’ Is that a Fats Domino poster in the room from where Strickland et al are overlooking the bridge? That moment of suspense when Karla pauses to look back, then lights a cigarette…

‘Karla does not appear again in Le Carré’s novels, except a brief mention in The Secret Pilgrim, when Smiley tells a group of probationary intelligence officers that he was the one who debriefed Karla in captivity. Speaking in general about the nature of interrogations, Smiley says that sometimes they are “communions between damaged souls.”’

Damaged souls are much in evidence in Smiley’s People, and many—perhaps most—of these People are cold war casualties in their various ways. For me, re-watching the show more carefully and attentively highlighted Smiley’s role as a cold war perpetrator and perpetuator, as much as he’s also a victim of it. On first viewing, swept along by the quest to solve the mystery of the General’s death, and the subsequent pursuit of Karla, I felt very much on Smiley’s side, but now, not so much.
posted by misteraitch at 2:48 AM on May 16, 2015 [1 favorite]

I thought Grigoriev an enjoyably well-fleshed-out character: at once lecherous and henpecked; perceptive but foolish. I enjoyed how Toby just about manages to keep a straight face when he requests a British Army uniform.

"George, this is a madhouse!"

I love how quickly in the interview with Smiley he goes from frightened, to blustering, to self-pitying, to sitting backwards in his chair spilling the beans with gusto. "A ballerina in Leningrad" indeed! But, as you say, he's also perceptive - he knows exactly what Smiley is and what tactics he's using: precisely the same ones as Karla.

…in Soviet Russia, history makes you.’

It's not at all a Bolshevik sentiment, though. Karla, in the vanguard of the Revolution, would not approve.

For me, re-watching the show more carefully and attentively highlighted Smiley’s role as a cold war perpetrator and perpetuator, as much as he’s also a victim of it.

The first time I saw Smiley on screen was in The Spy Who Came in from the Cold in which he and Control run a truly "lousy, filthy operation," so I've never had the sense of him as "the good guy" despite his admirable qualities.

And those admirable qualities are pretty threadbare by the end of Smiley's People. He told Guillam that Karla's downfall would be his fanaticism, but it's humanity and compassion that Smiley exploits to destroy him. He's become a reflection of Karla. Smiley looks at the lighter on the Berlin pavement and just walks away - you have to wonder what's left of him.
posted by sobarel at 5:02 PM on May 17, 2015

If you’ve not seen them, there are a couple of interesting clips on YouTube—under the title John le Carré about Smiley’s People (Part 1, Part 2)—in which David Cornwell and John Irvin (director of Tinker, Tailor…) reminisce about how Alec Guinness became George Smiley.
posted by misteraitch at 3:10 AM on May 19, 2015 [1 favorite] 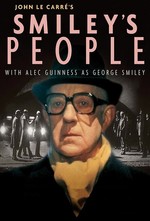