The Sheriff's Secret Police track down a fugitive. Plus, stories from vacation, some progress at the new Old Night Vale Opera House, and another edition of "Hey There, Cecil."


The voice of Carlos was Dylan Marron.

While the desert around Night Vale is mostly red and brown dust, with a smattering of white and brown rocks, topped with gray and brown brush, the canyons of the desert otherworld are flush with rich brush of charcoal and tan, rocks the color of snow and leather, and dust that was striped in shades of sunset and mahogany.
posted by DevilsAdvocate (7 comments total) 2 users marked this as a favorite
Episode 67 was like stepping on a landmine, after walking along a lovely trail: a surprise and then time to sit and contemplate the dammage. This episode was more a knife slipped between your ribs: sly, slick, painless at first, but shocking as you see the blood flow down your side.
posted by jazon at 3:35 PM on May 15, 2015 [4 favorites]

This episode began completely differently as to how it ended. It had a nice, typical episode feel at the beginning, and then, whoa.

I am now 100% convinced that the Man in the Tan Jacket is the owner of Lot 37, that he has been influencing Cecil to save Mayor Cardinal, and that the Faceless Old Woman is now actively trying to prevent this.

- The Man in the Tan Jacket, when he speaks to you, sounds like noises. From Episode 63 (Part Two):
"Oh, I’m sorry, listeners. There is a knocking on my studio window. It is a Man in a Tan Jacket, holding a deerskin suitcase. It is difficult to describe his features, as they escape my mind the moment my eyes leave his face. He is waving, indicating that he would like to come in and speak to me. And, presumably, to all of you.

But how would we even get there? I’ve never heard of that place. I…"

- No one can remember the Man in the Tan Jacket speaking to them - they just come to, confused ("But how would we even get there?")
- After that exchange in Episode 63, Cecil goes to save the mayor.

- In this episode, there is a strange noise of distorted speech, and Cecil all of a sudden says, "Oh! Oh dear, that's– that– that’s simply not true! I– OK."
- After THAT exchange in this episode, Cecil adamantly states that he will not be going to save the mayor this time.
- The Faceless Old Woman then puts silverfish in Cecil's ears (sidenote: aaaaaaaaaaaaaaaaaaack).
- THEN: It is never said whether Cecil goes to save the mayor or not! It is assumed that he did, Carlos mentions that he must have, but there is no confirmation that he did!

My conclusion: The Faceless Old Woman put bugs in Cecil's ears so that he would not hear and therefore be immune to the Man in the Tan Jacket's call to do his bidding.


This throws up all kinds of questions for me. It's like, we now have to consider that the Faceless Old Woman is actually doing something NICE for Cecil in helping him throw off being controlled (for her own purposes, of course). I draw a parallel to Kevin - are we supposed to assume that he is also doing something nice for Cecil in building the radio tower? To what ultimate purpose? Carlos says that Kevin is much more chill now (presumably away from the influence of Strex) but . . . are we meant to believe that? Taken at face value, there was actually nothing in Kevin's voicemail that was threatening.

In other news, guh, that ending. The absolute honesty of that "Yes" immediately after Carlos' voicemail, and how gutted Cecil sounded. And the acknowledgement that private thoughts and radio thoughts must be separate, and that he has to play dumb in public about what Carlos might mean. Guh.
posted by chainsofreedom at 3:52 PM on May 15, 2015 [1 favorite]

WTNV does have a way of redeeming despised characters (or at least, characters that Cecil despises) around its anniversary — the Apache Tracker in One Year Later (1st anniversary), and Steve Carlsberg in Old Oak Doors Part B (Part A was on the 2nd anniversary). Perhaps Kevin will be redeemed this year?

Also worth noting that the scheduled opening date for the new Old Night Vale Opera House is June 15, which will be WTNV's 3rd anniversary.
posted by DevilsAdvocate at 5:45 PM on May 15, 2015

Kevin is not nice. Also, that is not barbecue sauce on his shirt. Kevin's modus operandi is that he always seems nice and pleasant even while he's doing the most horrific things. (Don't the Seans' viscera really brighten up the studio?)

Meanwhile... we've apparently established that Cecil and go to and from the desert otherworld. Why can't he bring Carlos back with him? (Is Carlos refusing to go back because he has too much sciencey science to science? Or will the universe not let him go back the same way?)
posted by Shmuel510 at 6:52 PM on May 15, 2015 [1 favorite]

Lee Marvin is confirmed as being immortal. Explains all his many 30th birthdays.

"Of course, without a face, I imagine it would be simultaneously easy and difficult to identify her."
Which is followed up by:
"They thought they had been arresting several corporeal forms of her across town, but in actuality they had just been arresting a bunch of faceless old women who openly live in their own homes."

“you can’t learn to love others until you learn that others are fiction, and that self is unreliable.”

Ugh. I'm going to be in Costa Rica on June 1st. Do I read the transcript on my old-school Kindle, or do I wait it out until I get back on the 7th? Decisions, decisions.
posted by chainsofreedom at 1:15 PM on May 21, 2015

Opening night of the New Old Opera House will be June 15th, and will feature the world premiere of an original opera by the famous actor and composer, Lee Marvin – Night Vale’s own immortal legend of stage and screen. 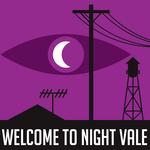