Ami Mizuno’s IQ is off the scale, which has made her somewhat of an outcast amongst her peers. This doesn’t stop the kind-hearted Usagi from making friends with her. (with some assistance from Luna) When Jadeite sends another Youma to obtain more human energy and search for the Silver Crystal a new sailor guardian is reveled!


I honestly don't know if it's possible to operate under the assumption that we don't know which Sailor Guardian Ami is. Between the title of the episode itself, the 90's anime, and the manga.. could someone not know she's Mercury?

I personally loved Usagi's pink laptop with the bunny sticker. I like the subtle updates to technology to bring the story into the current decade. I'm curious if they'll be using cell phones in place of the cute communicators.

I heard a lot of grumblings on social media that the animation for this episode was especially poor, but I didn't notice? Luna has issues, but she had issues last episode too. My assumption is that the animator for Luna has never seen a cat before.

If we prefer to pretend the old anime or manga didn't exist in further episode threads, I will make an effort to write those as new-show-only in the future
posted by royalsong (6 comments total)
As someone who was only vaguely familiar with the first series, I find myself loving the hell out of this new one. Makes me want to go back and rewatch old episodes.

Definitely entertaining and I look forward to these "origin" stories of each of the various Guardians.

I think the only thing about the remake that I can't deal with about this new one is Luna. This is the first time Japan has ever produced a non-cute cat.

I for some reason like Usagi a lot more here than in the original series. Her annoying seems more deliberate and less 'cute'. When she bangs on the video game, everyone is thinking, "wow that girl is bonkers!", which is absolutely the appropriate thing to think.

The over-the-topness is one of the great parts about Sailor Moon in general. They know they are playing on tropes, so they can just say "yep, this is the Paper Thin Disguise trope, no need to even have Tuxedo Mask change his clothes when he's in and out of disguise. Let's just dispense with trying to disguise him altogether and move on with the fun.

royalsong: funny that you mention their updated technology, considering that this episode is about a CD... as in a disk that you stick in a physical drive. Probably much easier to brainwash people over the Internet.
posted by tofu_crouton at 3:55 PM on July 22, 2014 [1 favorite]

The Dark Kingdom lags behind in their technological advances.
posted by royalsong at 5:56 PM on July 22, 2014 [1 favorite]

I've seen some people complain its a bit too moe but I really like it, so very cute! Also really love their transformation sequences, despite complaints about them looking too stretched out (valid but I think it works for this series) and the songs in the beginning and end. I also must have poor eyesight because I really love how cute Luna is when she talks!

Tuxedo Mask must work full time as a butler or something, whatever happened to that green blazer he used to wear?
posted by driedmango at 7:02 PM on July 22, 2014

As a huge fan of the original series, I'm trying to not to be annoyed when something is different just because it's different. I might end up liking this a lot.

There are two things I haven't adjusted to yet though. Everyone is so pointy--they've lost that adorable roundness anime and don't capture the fluidity of the manga.

The other is the... I don't know the technical term, someone help me out.... the bloom? Almost every frame seems slightly overexposed and the colors slightly washed out, like someone has been fiddling with the contrast and brightness settings in photoshop without making other adjustments to keep the image vibrant.

Taken together the animation style kind of rubs off on me as kind of derivative and cheap. But maybe I'll stop noticing so much.
posted by Kutsuwamushi at 8:54 AM on July 24, 2014

I'm afraid I definitely noticed the poor animation in this episode. Overall I like the new style, but there were quite a few shots that jumped out at me as being really not great and it pulled me out of the action. (Though it's not like the original series was a bastion of staying on-model, either)
posted by Gordafarin at 5:15 AM on July 30, 2014 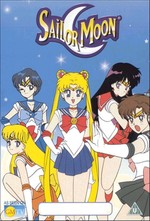