This film-noir stars Fred MacMurray as an insurance salesman, Barbara Stanwyck as a housewife who wishes her husband were dead, and Edward G. Robinson as a claims adjuster whose job is to find phony claims. The term "double indemnity" refers to a clause in certain life insurance policies that doubles the payout in cases when death is caused while riding a railway or other public transport means.

"Praised by many critics when first released, Double Indemnity was nominated for seven Academy Awards but did not win any. Widely regarded as a classic, it is often cited as a paradigmatic film noir and as having set the standard for the films that followed in that genre.

"Deemed 'culturally, historically, or aesthetically significant' by the U.S. Library of Congress in 1992, Double Indemnity was selected for preservation in the National Film Registry. In 1998, it was ranked #38 on the American Film Institute's list of the 100 best American films of the 20th century, and in 2007 it was 29th on their 10th Anniversary list."

Roger Ebert discusses the movie's genesis in his review (12/98):

"The story was written in the 1930s by James M. Cain, the hard-boiled author of The Postman Always Rings Twice. A screenplay kicked around Hollywood, but the Hays Office nixed it for 'hardening audience attitudes toward crime.' By 1944, Wilder thought he could film it. Cain wasn't available, so he hired Raymond Chandler to do the screenplay. Chandler, whose novel The Big Sleep Wilder loved, turned up drunk, smoked a smelly pipe, didn't know anything about screenplay construction, but could put a nasty spin on dialogue."

Double Indemnity: An In-Depth Look At A Film Noir Classic, by Rachel Elfassy Bitoun (The Artifice):

"In film noir, lighting implicitly develops key points around the story and the protagonists. It hides them from the audience’s sight, and wraps the plot in enigmas and secret crimes. Yet Double Indemnity adds in an extra layer of complexity – lighting also reveals the hidden evils within the characters. Thus, it is used as a narrative feature which puts aspects of the story and of the characters into visual form. Wilder and his director of photography John Seitz play with light to portray the characters’ conflicting emotions. The juxtaposition of brightness and shadow parallels the unsteady moral consciousness of Phyllis and Walter, who both wobble between good and evil, love and lust, virtue and crime. As Schickel claims, Double Indemnity is ‘a drama about light, about a man lured out of the sunshine and into the shadows’ . At the beginning of the film, sun covers the city of angels and shines through the blinds of the insurance’s offices and the Dietrichson’s house. It is in this sunny ambiance that Walter meets Phyllis, wrapped in a white towel after sunbathing. Everything shines about her: her jewels, her white dress, her nudity. Walter has been blinded by her, a bright artificial sun, and from there rain and darkness reign. He has literally been taken out of the sunshine into the shadows."

Last word to Roger Ebert in the same review cited above as to the motivations and relationship between the characters:

"Why [did they commit the crime]? Is Neff blinded by lust and greed? That's the traditional reading of the film: weak man, strong woman. But he's aloof, cold, hard, terse. He always calls her 'baby,' as if she's a brand, not a woman. His eyes are guarded and his posture reserved. He's not moonstruck. And Phyllis? Cold, too. But later in the film she says she cares more about 'them' than about the money. We can believe the husband died for money if they both seem driven by greed, but they're not. We can believe he died because of their passion, but it seems more like a pretense, and fades away after the murder.

"Standing back from the film and what it expects us to think, I see them engaged not in romance or theft, but in behavior. They're intoxicated by their personal styles. Styles learned in the movies, and from radio and the detective magazines. It's as if they were invented by Ben Hecht through his crime dialogue. Walter and Phyllis are pulp characters with little psychological depth, and that's the way Billy Wilder wants it. His best films are sardonic comedies, and in this one, Phyllis and Walter play a bad joke on themselves."


Barton Keyes: I picked you for the job, not because I think you're so darn smart, but because I thought you were a shade less dumb than the rest of the outfit. Guess I was wrong. You're not smarter, Walter... you're just a little taller.
posted by joseph conrad is fully awesome (17 comments total) 11 users marked this as a favorite
That line about Neff being a little taller occupies a weird place in my personal universe. For years I was absolutely convinced that it was Barbara Stanwyck's line. I could hear her say it, call up her particular intonation everything. Imagine how surprised I was to rewatch the film some years later and discover it's actually Edward G. Robinson's line.
posted by Naberius at 10:54 AM on August 25, 2015 [4 favorites]

Uuugh this movie is so good, and you can place it down to the year almost with that "fading out of style Spanish colonial interior decor".
posted by The Whelk at 11:35 AM on August 25, 2015 [1 favorite]

how many times has that "talking covertly in a grocery store" scene been homage-d, re-used, or parodied? Historical notes on the grocery scene.

I wish I had something better/longer to say about this movie. Maybe if I go watch it for the 100th time, I will. If I had to pick just one noir movie that would be a difficult choice but on most days it'd probably be this one.
posted by sparkletone at 11:53 AM on August 25, 2015 [3 favorites]

I'll admit that I never connected with Double Indemnity the way I wanted to, possibly because I've never "gotten" femme fatales (though Stanwyck is excellent), possibly because MacMurray has all the charisma of wet lumber, but my God I would watch an entire series of Barton Keyes movies. That insurance speech OMG.
posted by thetortoise at 4:55 PM on August 25, 2015 [3 favorites]

Double Indemnity, along with White Heat, were my twin gateway drugs into the world of classic film. Strange Love of Martha Ivers, also with Stanwyck, is another noir that made a deep impression.

Jcifa, I like the quote you included about Phyllis blinding Neff with her first appearance. The blond wig is a big part of that ... sometimes the top of Stanwyck's head is lit to give off a weird glow. The otherwise decent commentators on my DVD were all HURF DURF CHEAP BLONDE and why did they have to change Stanwyck's hair. (Apparently Wilder himself thought it was a mistake after the fact.) I think the weird blond do is spot on: Stanwyck is notable for the authenticity of her presence, even in The Lady Eve where she's playing a con artist (who falls in love with her mark). The blonde wig makes Stanwyck seem other than herself: it's credible that THIS blonde woman, with all the intelligence Stanwyck brought to the portrayal, is in fact an honest to God sociopath. Earthy brunette Stanwyck? Much less otherworldly.
posted by Sheydem-tants at 6:52 PM on August 25, 2015 [7 favorites]

One argument I heard was that anyone who willing thought that hairdo looked good was clearly bad at making decisions
posted by The Whelk at 7:34 PM on August 25, 2015 [2 favorites]

I was happy to find Double Indemnity on my Qatar Airways entertainment system 3 weeks ago. I don't have much to add to the analysis here, other than I still find it one of the purest and most enjoyable film noirs. I tend to overlook Stanwyck's hairdo because my attention is always drawn to those amazing pom-pom heeled slippers.

I made it a James M Cain adaptation double-bill by watching The Postman Always Rings Twice shortly after. While Lana Turner is as iconic as Stanwyck in the blond-ambition-sociopathic-murderous-wife role, the film in general suffocates under the sheer MGM hammy-ness of the set-up, particularly compared to the taut, snappy, pitch perfect pace of Double Indemnity.
posted by dumdidumdum at 1:30 AM on August 26, 2015 [3 favorites]

So last week on old timey film club, I said that this was my favorite Wilder movie. It actually might be my favorite movie. I just absolutely love it. I love the wig. I love Fred Macmurry (and I actually think he's weirdly hot throughout and will not apologize for doing so). I love how Edward G. Robinson plays Keyes disappointment as he confronts Walter at the end, completely the same character but somehow perceptively broken by the whole turn of events. I love the dude from up north who comes down to be the witness and how he tries to finagle an extra night's stay at the company's expense. I love how Keyes early in the film is ruthless in getting the poor guy to admit he torched his own truck, but not so ruthless that he reports him to the authorities for fraud. I love that god damn anklet so much I've considered wearing one. I love Phyllis's veil and her fake anger during the scene in the insurance office. I love the close up on Phyllis's face while the actual murder is being done and how not seeing it makes the whole thing so much more brutal.

I first saw this movie on Iowa Public Television some Saturday night when I was in junior high and felt like a loser because I didn't have anywhere to go (not realizing that no one else was doing anything without me); I was hooked from start to finish and the dialogue got to me, no matter how dated it felt, and I've only grown to appreciate it more with age.

Getting "that tears it" to be a phrase I use regularly in conversation is something I've still not been able to do, but this exchange always wants to make me try.

Thanks for putting together such a great post about this movie, and I can't wait to read all the links.
posted by MCMikeNamara at 8:59 AM on August 27, 2015 [6 favorites]

I love that exchange. I also love Fred Macmurray's delivery of "Do I laugh now, or wait till it gets funny?" That's the phrase I want to use regularly in conversation.
posted by bakerina at 9:22 PM on August 28, 2015 [3 favorites]

Getting "that tears it" to be a phrase I use regularly in conversation is something I've still not been able to do, but this exchange always wants to make me try.

It's possible! My SO loves this movie and indeed uses, "that tears it" all the time. I too thought it was the best exchange of the movie.
posted by nom de poop at 9:40 AM on September 9, 2015

Really really solid! I enjoyed a lot of this, and having seen a lot of noirs you can really tell how much of an impact it made/created in the genre. I will say him giving the nickle to Zachetti is the only real false note, particularly after we know how he seems to treat Lola.
posted by Carillon at 12:30 AM on July 24, 2022 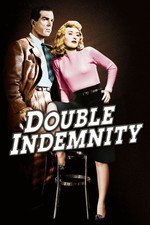