A Canadian man in London finds himself pulled into a chain of events in which he must go on the run in order to save himself.

The 39 steps of the title is, of course, a MacGuffin - a plot device that Hitchcock defined as a something that sets the plot in motion and is the ostensible focus of attention, although the audience doesn't really care about it. From the link: "Perhaps the most important thing to remember about the MacGuffin is that it contains the word 'guff,' which means a load of nonsense."

The MacGuffin in The 39 Steps is the top-secret plan for a piece of advanced technology (an airplane) held in Mr. Memory's head - however it really doesn't matter as our real focus is on Robert Donat's ('Richard Hannay') quest to clear his name in connection with a murder.

Tony Paley notes the humor throughout the film and calls The 39 Steps "Hitchcock's most purely enjoyable movie"; from his piece in The Guardian:

"No other director amassed such a rich array of seminal movie moments, from the shower scene in Psycho to the crop-dusting in North by Northwest. Most will remember the interrogation of Mr Memory at the London Palladium at the end of The 39 Steps, but the moment the evil Professor Jordan reveals his identity by lifting his hand to show his missing finger, and the rousing speech Hannay gives at a political meeting, are two other notable scenes. Best of all, though, is the famous sound-match cut as Hannay's landlady discovers a woman's dead body at his flat and turns in horror, her scream merging with the whistling of the train taking the alleged murderer on his quest to prove his innocence."

The AMC Film Site comments on a minor theme in the film:

"One of the film's major motifs is the confining, sexually-frustrating institution of marriage. [There are three married couples in the film that provide the commentary: Margaret and her abusive husband John, Professor and Mrs. Jordan, and the innkeepers who encourage romance.] The film's two MacGuffins are the nature of the 39 Steps and the smuggling of secret plans out of the country - the mystery of which is only fully revealed in the final scene."

Hitchcock appears early in film on the street throwing a piece of litter on the ground, as crowds and a bus move behind him; 'Richard Hannay' and 'Annabella Smith' rush by on the street. If you'd like to see more, here's Every Hitchcock Cameo Ever; alternatively, a list with screenshots of most every Hitchcock cameo.

Selected Academic Works
How to be a Hero: Space, Place and Masculinity in The 39 Steps; Keeping Your Amateur Standing; The 39 Steps and the mental map of classical cinema.

Definitely one of his early classics and full of such a fine collection of Hitchcockian elements. I think it's his best example of the "Wrong Man" trope (beating out even the film Hitchcock literally titled "The Wrong Man") and, like "The Lady Vanishes" it also makes great use of the "young man and woman who initially despise each other are thrown together by fate" pattern.

Also like "The Lady Vanishes," it's the minor characters who elevate this story above the mundane formulaic exercise it could have been.
posted by Nerd of the North at 12:38 AM on September 6, 2015 [1 favorite]

This is a fun little film, but clearly not his best. It feels cliched in a way Hitchcock's later efforts don't as much, and the conclusion is more than a little bit absurd (yes, I have a perfect memory and am somehow incapable of not blurting out what I remember!). The sexual politics are also... interesting, to say the least.
posted by Cannon Fodder at 12:14 AM on September 7, 2015

Oh, this is far from perfect, but it's oh so engaging you don't care. Pacing is perfect, you have one neat set-piece after another, and it's pretty weird in the unique way that Hitchcock films can be (like the quasi-Pagan/New Age religion, about which shhh.).

I will say this, though -- I've become quite a fan of the novella and while Hitchcock's is the best film overall, I don't feel it or any of the other versions that I've seen quite do it justice. But if you love this storyline, be sure to pick up Reilly: Ace of Spies, with Sam Neill. It's mostly true!
posted by dhartung at 1:20 AM on September 8, 2015

I think the Criterion Collection essay linked above hits it pretty squarely when it says:

Everything we know about Hannay's life emphasizes how sketchily drawn and temporary his life is before the movie begins, from cardboard letters in his apartment lobby..

..to the apartment itself, where the furniture is still covered in sheets.

All the movie tells us about him is he's in town for a short time on business and he's Canadian. But as you can see from the sets, Hitchcock does everything he can to impress upon us that Hannay isn't carrying much of a back story with him. Hannay's life really begins when the movie does..

every bit of which is true. You don't get any sense of Richard Hannay as a fully defined person. It's not because Hitchcock is incapable of giving you a sense of character -- the deftly sketched minor characters mentioned above (the sentimental innkeepers, the dour farmer and his mistreated wife) prove otherwise -- they are given impressive amounts of personality considering the very short amounts of screen time they receive. It's because Hannay's role in the story is to be a blank screen for you to project yourself onto and for most of the audience this works brilliantly to engage the viewer in the suspense of Hannay's predicament and flight.

It's a big gamble to take: the success or failure of the film hangs in the balance -- if you find yourself identifying with Hannay and visualizing yourself in his situation the film works. If you can't inhabit the character, however, there's not much else to carry you along here, there's certainly no strong reason you should care about what happens to Hannay if you're not identifying with him.. On the whole, Hitchcock's gamble pays off because he's able to keep things moving along smartly enough that you never stop and look too closely or ask too many questions..
posted by Nerd of the North at 11:50 AM on September 9, 2015

I like that it sets the ground for the train scene in NxNW, this time the put upon heroine takes the expected route and grasses up Hannay to the filth when he forced a kiss on her. Eva Marie Saint has a different response in a virtually identical scene. This one is perhaps more convincing.
posted by biffa at 3:29 PM on October 11, 2022 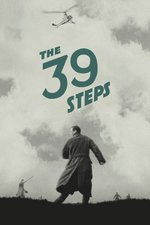