Dictator Adenoid Hynkel tries to expand his empire while a poor Jewish barber tries to avoid persecution from Hynkel's regime.


From the 1940 New York Times film review by Bosley Crowther:

"No event in the history of the screen has ever been anticipated with more hopeful excitement than the première of this film, which occurred simultaneously at the Astor and Capitol Theatres; no picture ever made has promised more momentous consequences. The prospect of little 'Charlot,' the most universally loved character in all the world, directing his superlative talent for ridicule against the most dangerously evil man alive has loomed as a titanic jest, a transcendent paradox. And the happy report this morning is that it comes off magnificently. 'The Great Dictator' may not be the finest picture ever made—in fact, it possesses several disappointing shortcomings. But, despite them, it turns out to be a truly superb accomplishment by a truly great artist—and, from one point of view, perhaps the most significant film ever produced.

"Let this be understood, however: it is no catch-penny buffoonery, no droll and gentle-humored social satire in the manner of Chaplin's earlier films. 'The Great Dictator' is essentially a tragic picture—or tragi-comic in the classic sense—and it has strongly bitter overtones. For it is a lacerating fable of the unhappy lot of decent folk in a totalitarian land, of all the hateful oppression which has crushed the humanity out of men's souls. And, especially, it is a withering revelation, through genuinely inspired mimicry, of the tragic weaknesses, the overblown conceit and even the blank insanity of a dictator. Hitler, of course."

The review ends with remarks about the famous last scene - the speech. Although Crowther calls it maudlin and out-of-step with the rest of the film, he concludes:

"Suddenly one perceives in bald relief the things which make 'The Great Dictator' great—the courage and faith and surpassing love for mankind which are in the heart of Charlie Chaplin."

Links
The Great Dictator: The Final Speech (text)
Charlie Chaplin - Let Us All Unite! (Melodysheep)
posted by joseph conrad is fully awesome (9 comments total) 3 users marked this as a favorite
I love Chaplin's early films and really wanted to like this later work when I finally watched it a couple of years ago - felt like I should like it - but I have to say it's not one of Chaplin's best. I know it gets praised a lot, and at the time the parody of Hitler must have felt important, but the satire is broad and obvious and feels stilted now, and the laughs are few and far between, without the deep humanity/hilarity/sadness that makes the early Chaplin films so wonderful. The older Chaplin seems self-conscious (overly precious, even) and the whole thing just fell flat for me. I understand that's a minority opinion.

That said, Chaplin's courage in pushing for an anti-Nazi film in 1938, when most of Hollywood was running scared of offending the German market, can't be praised enough. By the time the thing was finished Dunkirk had happened, France had been occupied, and Hollywood opinion had done an about face, which may help account for the gushing over the film. But as a film it doesn't hold up nearly as well as almost any of Chaplin's other, earlier, major works.
posted by mediareport at 7:53 PM on September 8, 2015 [1 favorite]

Some (more general) historical background I thought was interesting: What we can learn from Charlie Chaplin and 'The Great Dictator':

“Initially, when he proposed the film, there were fears — in Britain, particularly, where appeasement was still very much in the air — and there was talk that the film would be dangerous," says film critic and historian David Thomson.

But events overtook the worries. "By the time it was ready, by the end of 1940, the world was at war, and it was clear that there was no getting out," Thomson says. "The film became a huge success."

Chaplin’s film made huge cultural waves around the world — except in Germany. "The Great Dictator," along with many other films during that time, was banned in Germany. But "the story is that Hitler himself saw it," Thomson says. "Somehow a print was taken there and the story says that he saw it twice."

The media reaction at the time of the release was rather measured and calm, according to Thomson.

“In 1940, the world was in great great peril, but it had a very, very stable media climate," he says. "The film was reviewed very favorably. It was a huge popular success. It was probably Chaplin’s most important feature film, and the one that did best at the box office. People loved it!”

I love the broad humor in the movie! Doesn't feel stilted at all - it feels fresh because the gags are timeless.

Also - the poetry and humor and satire of the famous balloon sequence ('globe') is just wonderful - a Chaplain signature scene where he demonstrates his physicality and all the rest of it.
posted by joseph conrad is fully awesome at 9:44 PM on September 8, 2015 [2 favorites]

I meant to put this in the post - from a Wikipedia footnote for the film's entry (and you can certainly find it elsewhere): "Chaplin, Charlie (1964). My Autobiography. p. 392. 'Had I known of the actual horrors of the German concentration camps, I could not have made The Great Dictator, I could not have made fun of the homicidal insanity of the Nazis.'"
posted by joseph conrad is fully awesome at 9:47 PM on September 8, 2015 [3 favorites]

The speech at the end is one of my favorite movie monologues. It goes beyond just beyond the horrors of war to indicting the modern age for its un-feeling nature.
posted by drezdn at 4:58 AM on September 10, 2015

I also was underwhelmed by the film (seen it before, so commenting from memory here). It's not a searing commentary so much as it is a almost-slapstick 'lol Hitler is a buffoon' which doesn't seem to be as devastating to Nazism. I agree that the end monologue, although it does shine on its own, is incongruous with the rest of the film.
posted by Noisy Pink Bubbles at 9:45 AM on September 11, 2015

Well it the 1st Chaplin movies where I saw him speaking and my gosh he is great in screenplay. No wonder he is a legend in every country which loves its cinema.

If I'm in the right mood at the right time of day then the ending speech will make me cry no matter how many times I've heard it.
posted by The Whelk at 8:39 AM on September 19, 2015 [3 favorites] 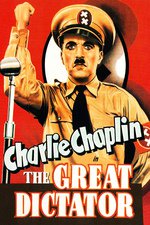