When two musicians witness a mob hit, they flee the state in an all-female band disguised as women, but further complications set in.

"The film was inspired by director Kurt Hoffmann's German movie comedy/musical Fanfares of Love (1951) (aka Fanfaren der Liebe) with a similar plot element that writer/director Wilder borrowed: two down-on-their-luck, unemployed jazz musicians dress up as women in order to get two weeks of work in an all-women's dance band bound for Florida, after witnessing a gang-land massacre in Prohibition-Era Chicago and being pursued by the mob. [The gangland slaying in the film was loosely based upon Chicago's infamous St. Valentine's Day Massacre on Feb, 14, 1929.]"

From a blog post at Only the Cinema, the author discusses the clever double-entendres of the script ("The script is constantly inching right up to the line of acceptability"), and concludes with commentary on how one of the signature scenes from the film demonstrates Wilder's approach to the material:

"But the film's heart remains with the gender confusion of the two leads and, even more so, with Monroe. Certainly, Wilder's camera loves her, lingering over her voluptuous curves and rendering her with more care and attention than is lavished on any other image in the film. In the scene where she sings 'I Wanna Be Loved By You,' Wilder cleverly casts a shadow across her body, clinging to her curves, obscuring more of her flesh than the barely-there dress she's spilling out of. As she bobs up and down, pursing her lips and whisper-singing the now-famous song, the shadow seems to hover just on the edge of revealing everything, forming a secondary cover-up that just barely maintains her modesty. This coy playfulness with the film's apparent sexual content makes for a consistently clever, uproarious comedy of subversive gender politics"

"Some Like It Hot does exactly what a farce is supposed to do – it gives you the sense of the world careening pleasurably but unstoppably out of control. Neither Wilder nor Monroe nor Curtis nor Lemmon ever equaled the work they did here. But nobody’s perfect."

On that last scene, in which Roger Ebert says, "[Joe E.] Brown delivers the best curtain line in the movies," Suzanne Woodward writes:

"The conventions of the typical cross-dressing comedy require that all possible confusion is neatly resolved and contained by the end of the film. Some Like It Hot allows the confusion to continue, and thereby allows each viewer to interpret the final scene in their own way, and to their own satisfaction. As the screen fades to black on Daphne/Jerry’s nonplussed face, the disruptions of gender and sexual boundaries remain unresolved with regard to these two characters, making any definitive categorization impossible regarding their identities, or the nature of their relationship. This is perhaps the most significant facet of the film’s popularity, that each viewer can construct the ending as happy regardless of their own particular ideology and preferences."

"Disruptive Influence: The Enduring Appeal of Some Like It Hot – Suzanne Woodward., Refractory: a Journal of Entertainment Media
"Sex, gender and heteronormativity: Seeing ‘Some Like It Hot’ as a heterosexual dystopia", Terrell Carver, Contemporary Political Theory (2009) 8.
"The Fuzzy End of the Lollipop - Protofeminism and Collective Subjectivity in Some Like It Hot", Melissa Meade (from Smart Chicks on Screen: Representing Women's Intellect in Film and Television, ed. Laura Mattoon D'Amore)

Y'know...I've just never cared for this movie. I really don't find it all that funny. I know that puts me at odds with, roughly, 99% of the rest of the world, but I really don't get it. And, lord knows I've tried and tried.

George Raft taught Lemmon and Curtis how to tango for their dance cenes.
posted by Ideefixe at 4:11 PM on September 22, 2015 [1 favorite]

Shot in part at the Hotel del Coronado. If you're lucky, you'll see Navy Seals in training from the nearby base. The instructors are particularly evil to have these guys at the end of their mental ropes get trotted past a luxury resort.
posted by Cool Papa Bell at 4:42 PM on September 22, 2015

I love it. I was glued to this movie as a teenager and watching Jack Lemmon in Billy Wilder's The Apartment some years later made me love both Some Like It Hot AND The Apartment exponentially more.

The last line is absolute perfection.

Much as I love the final line, I think my favorite line might be a little earlier...

Supposedly when Orry-Kelly was measuring all three stars for dresses, he half-jokingly told Marilyn Monroe, "Tony Curtis has a nicer butt than you," at which point Monroe pulled open her blouse and said, "Yeah, but he doesn't have tits like these!"
posted by wabbittwax at 6:19 AM on September 23, 2015

I once wrote half a fanfic where Jerry decided to just stay Daphne, and marry Osgood, and live as a rich society matron in diamonds and furs for the rest of her life, helping Osgood's nieces debut into society and get good husbands, helping Joe and Sugar whenever they ran out of money (again), and generally living happily ever after.

I feel like Daphne and Osgood's mother would eventually be real good friends.
posted by a fiendish thingy at 6:28 PM on September 23, 2015 [7 favorites]

Do you always get the fuzzy end of the lollipop?
posted by shakespeherian at 6:59 PM on September 23, 2015

I'm there with you, Thorzdad. (I don't know if this will make you feel better or worse, but I'm also one of the three or so people in the world who can't stand "The Princess Bride," so.)
posted by holborne at 7:11 PM on September 23, 2015

"Y'know...I've just never cared for this movie. I really don't find it all that funny. I know that puts me at odds with, roughly, 99% of the rest of the world, but I really don't get it. And, lord knows I've tried and tried."

Thank you, JCiFA! Some Like It Hot is one of my most favorite films. It's not just how funny Lemmon and Curtis are together, it's not just the fresh dialogue and direction. The minor characters slay me every time. The Society Syncopaters, the bellboy, police officers, Friends of Italian Opera, speakeasy patrons... There really are no unmemorable bit parts.

Some Like It Hot is special to me for another reason. There's a gorgeous old Beaux-Arts theater here, it's got a Wurlitzer organ and everything. I hadn't been to that theater yet, the gent hadn't seen the film yet, and the stars aligned. There's an old-style Dairy Queen next door, the kind with no seating inside and they just serve ice cream. So on a gorgeous summer evening we head over to the theater. We get our ice cream, we settle in, the organist is tearing it up, and then the magic starts. I had never seen that film as part of a theater audience before, and it was suddenly, glaringly obvious how some classics lose a bit of that magic if they're not shared with a crowd. Certain scenes and comedy bits popped more because of where the audience was reacting.

At the end there was tons of applause and cheering, and we stepped out into the perfect summer night.

This is exactly how I've always felt about this movie and I don't see it as one-note or bro-y. I'm queer and I love queer movies to me this is a queer movie. None of the characters are particularly deep but there is an edge of sadness to Marilyn Monroe's performance, especially in her final song, that makes her more relate-able, silly as she is. I also love any movie that lets her do comedy--she was great at everything but she is hysterically funny and I hate that she is remembered pretty much solely for her looks these days.

I don't think cross-dressing is inherently funny or interesting. Characters learning something new about themselves, however, is interesting. Discussion of gender identity in a movie from the 50's is interesting.

I would also argue that most of the comedy in the film doesn't come from cross-dressing itself but from the zaniness of the characters. That final line is funny because of Osgood's response. The "security" line is funny because it's so logical, and yet, in the context of the 1950's, so out of the blue. There's several funny scenes with Joe pretending to be a millionaire, aping Cary Grant.
posted by chaiminda at 1:56 PM on September 27, 2015 [7 favorites] 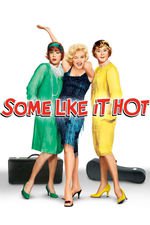