In 1897, A Transylvanian nobleman named Count Dracula is buying up property around London for mysterious purposes.


Not to be confused with the 1992 Coppola film of the same title, this made-for-TV adaptation of Bram Stoker's popular novel was written by Richard Matheson, produced and directed by Dark Shadows creator Dan Curtis, and stars Jack Palance as Count Dracula.

YouTube: Trailer
posted by usonian (2 comments total)
The Amazon link goes to the Coppola movie. Is this on streaming services?
posted by Monochrome at 7:37 PM on October 19, 2015 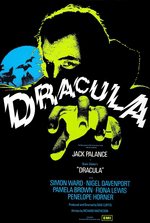