A drama critic learns on his wedding day that his beloved maiden aunts are homicidal maniacs, and that insanity runs in his family.

"Arsenic and Old Lace (1944) is a frenzied, hilarious, madcap black comedy from celebrated director Frank Capra. The slapstick film, with murderous aunts compassionately serving up elderberry wine to elderly gentlemen - with their crazy nephew assisting by burying the unfortunate victims, is unlike most of the other reform-minded Capra-corn films with a social conscience that became his trademark, e.g., Mr. Deeds Goes to Town (1936), Meet John Doe (1941), or Mr. Smith Goes to Washington (1939). It is more similar in tone to his screwball romantic comedy It Happened One Night (1934) and to Capra's other adaptation from a Broadway play You Can't Take It With You (1938). Cary Grant does a marvelous job of exaggerated acting with constant mugging and other facial plasticity, amazing double-takes, slapstick and general befuddlement.

"This macabre comedy film was un-nominated for Academy Awards. The film's screenplay was written by Julius J. Epstein and Philip G. Epstein. The macabre farce was based on Joseph Kesselring's successful Broadway play of the same name, and delayed in its exhibition and release for three years until the New York play ended its run. [The film's opening was on September 23, 1944.] The original cast stars of the Kesselring play, Jean Adair, Josephine Hull, and John Alexander, were released for a short while (for four weeks, the duration of the film shoot) to reprise their roles in the film, and joined established stars - such as Cary Grant."

"Mr. Grant, as usual, turns in a creditable performance although his energy is likely to wear down, eventually, the stoutest spectator. As a hyper-vitaminized drama critic, he bounds, bellows, howls and muggs through practically two hours and that, combined with the inevitable mugging of Jack Carson, makes those two hours long ones indeed. To offset this, practically all the efforts of Josephine Hull and Jean Adair, as the two gentle poison-cup artists, are required to keep the show on an even keel. They're delightful in their roles."

- Cary Grant considered his acting in this film to be horribly over the top and often called it his least favorite of all his movies. (link)

- When Mortimer is sitting in the graveyard, one of the tombstones has the name Archie Leach on it. Archie Leach is Cary Grant's real name. (link)

- On stage, Boris Karloff played the monstrous Jonathan Brewster, Raymond Massey's film character, who, in eerie-looking screen makeup, resembled Karloff, which was a running gag throughout the picture. Because Karloff was still appearing in the Broadway play during the film's production, he was unable to do the picture. (link)

- Ronald Reagan and Jack Benny were offered the role of Mortimer Brewster, but turned it down. Bob Hope was offered the part and was eager to do it but Paramount Pictures refused to loan him out to Warner Bros. for the project. (link)

YouTube: Cary Grant's Best Moments in Arsenic and Old Lace
posted by joseph conrad is fully awesome (13 comments total) 7 users marked this as a favorite
This movie is hilarious. Highly recommend to anyone who might be put off by black and white movies.
posted by ian1977 at 5:37 AM on October 27, 2015

Yeah, this is one people should watch if all they know about Cary Grant is North by Northwest. He's a great comedic actor, and this is a fantastic romp for him. I'm not surprised he thought his acting was over the top, because it really is. But, that's what sells the story. He also breaks the fourth wall a few times. Not sure if that was intentional, but they left it in the film.

I can't imagine Bob Hope (or Benny or Reagan) in this role. I'm not a fan of Hope, and think his smart-ass comedy style would have been all wrong.

If you're interested in seeing more of Grant playing a comedic role, I suggest you take a look at Father Goose. It's an older Grant in his more familiar laid-back style, in a more-or-less dramady, set during WWII. And, it's in color, kids!
posted by Thorzdad at 5:54 AM on October 27, 2015 [4 favorites]

I'm amazed that this movie was made when it was made, considering the subject matter. Maybe I'm misreading the tone of the times. The idea that they could build a comedy around multiple murders and jokes about death without including a single supernatural element to soften the blow. Did they run up against any resistance from the censors?

Flexagon, Arsenic was a very popular Broadway play at the time. Death wasn't censored in the movies of the time.
posted by Thorzdad at 1:03 PM on October 27, 2015 [2 favorites]

This is one of my favorite old time movies, and I've seen Cary Grant in enough comedic roles to know he's an excellent comedic actor -- Bringing up Baby and His Girl Friday come to mind. I'm certain there are more, but those are the two that I immediately think of. But the rest of the cast was great as well. I especially love the aunts and the creepy brother, Johnathon (Raymond Massey). "He looks like Boris Karlof!" hahaha. And Dr. Einstein (Peter Lorre) is a hoot.

As for the play... a local college did this play not too long ago, and they did a wonderful job. I was nostalgic sitting in the theatre.
posted by MildredMakenpace at 1:20 PM on October 27, 2015 [4 favorites]

I'm certain there are more...

Bringing up Baby, Holiday...Grant was wonderful opposite Katharine Hepburn. I prefer Grant/Hepburn comedies to anything Spencer Tracy/Katharine Hepburn.
posted by beaning at 6:31 PM on October 27, 2015 [4 favorites]

I'm not trying to be contrarian, but I'm with Cary Grant on this one. As much as I love his work in general and especially in comedy, I really dislike this movie. After hearing for decades about how good it was, I was so disappointed when I finally saw it. And I think Grant's insanely over-the-top performance is why.
posted by pmurray63 at 12:22 AM on October 28, 2015 [2 favorites]

Yup, everyone else is just great, but Cary Grant's performance (unfortunately) is hard to take. Though I note from the imdb trivia that the plan was tone it down in editing, but this didn't happen because the war broke out - film was made in 1941, not released till 1944.

In this period of his career, I rate his performance here worst by far, that of Philadelphia Story best, closely followed by Holiday, which I've always thought a criminally overlooked movie.
posted by daveje at 6:14 AM on October 28, 2015 [1 favorite]

This movie really has it out for Brooklyn, huh?

And it goes from comedy to thriller/horror and back again pretty quick.

Love this movie. Damn the censors for changing bastard to sea-cook.
posted by Diablevert at 6:42 PM on October 30, 2015 [2 favorites]

It would've been awful if they had cast Reagan or Bob Hope - so glad it wasn't. I saw this as a kid so Grant's over-the-top reactions and mugging didn't seem bad, they seemed hilariously good. Maybe childhood is the best time to watch it.

The slide from comedy to terror works really well, though; the real threats in the movie (of the bodies being discovered, of being judged not a normal family and the accompanying social stigma, the physical threats from his brother played by Raymond Massey) give it a weight and tension that plays well with the comedy bits.

One of my favorite Peter Lorre roles.
posted by joseph conrad is fully awesome at 3:25 PM on October 31, 2015 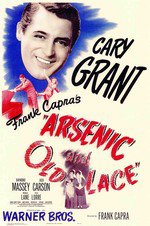