The next jump forward in the Foundation storyline takes us well into the second century of the 1000 year plan (which, incidentally, was the original name of the the first book). A merchant from the Foundation on a trading mission to a distant planet runs afoul of local laws and customs. Another trader, Linmar Ponyets, is sent to save him.


To be honest, I keep forgetting that this story even exists. It feels like a dry run at "The Merchant Princes", and I don't know what would be lost from the world of the Foundation series if Asimov had never written it. Am I too harsh on "The Traders"? Is there more going on there than I realize?

Of the early stories, it's the one that's most generic. There must have been thousands of "guy goes to planet to save another dude who ran afoul of local laws and customs" stories written during the 40s and 50s. The only thing that distinguishes it is the fact that it's set within the Foundation universe.

In that it gains a few interesting aspects. The society of the Galactic Empire is barely sketched out, but from the last two stories in the first volume the reader gets the feeling that the planets were quite isolated to begin with, and that they developed particular cultures in which only the elites were meaningfully part of the empire.

Here Asimov is less of disciple of Marxist historians than elsewhere in the early stories, but more drawing on the nationalistic view of history, where the different ethnic groups which make up the empire are the real units of focus, permanent in a way that political groupings aren't.

With that in mind, perhaps the most interesting character in this story is Pherl. He isn't of the right ethnic group, and is therefore disadvantaged when it comes to his ambition of becoming Grand Master. He needs all the competitive edge he can get, and is therefore amenable to Ponyets' offer. Asimov goes a long way, by his standards, to give him a backstory and motivations. I want there to be some kind of "point" to Pherl, a reflection on the wider story of the Foundation's success, but I can't really figure it out. What's the deal with Pherl?
posted by Kattullus (4 comments total)
Yeah, this one is pretty forgettable.
posted by Chrysostom at 5:33 PM on October 27, 2015

In a trilogy-wide sense, Pherl is the first non-Foundationer to work with a Terminus agent with the knowledge that he's being used. So far, the Foundation has been obscure to its enemies—using its hidden depths to manipulate the Empire, holding off the Four Kingdoms using each one's fear of the other, and exerting de facto temporal power over Anacreon by holding tight reins over the spiritual power of its masses. Pherl of Askone is ambitious, and even though Ponyets had to blackmail him into it, the bishop went along with the Foundation's plan willingly in the end. The elites of the Periphery are beginning to see that long-term, it might be useful to be aligned with this new techno-confederation instead of the decaying Empire.

But Personal Capsules, telemessages, cigarettes and the lack of women severely dates this story. There's not even an appearance by Hari Seldon to tie this one to the rest of the first novel. To me, the only other interesting thing is the quote "Never let your sense of morals prevent you from doing what is right," which is perhaps a bit subversive for Americans during WWII.

Also note that it originally was published after the next part, and makes a lot more sense as a quick change of pace before the much more satisfying Merchant Princes section concludes the novel on a high note.
posted by infinitewindow at 8:00 PM on October 27, 2015

Another note from dfan's link in an earlier post: originally, the main character of this story was named Lathan Devers, a key character from Foundation and Empire part 1: The General.
posted by infinitewindow at 7:58 PM on October 28, 2015 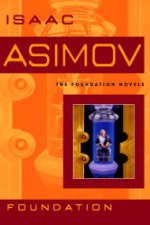