Michael learns that most of his family is on the company payroll despite not working there. Gob and Buster are sent to work at the construction site.


This marks the beginning of a memorable mini-arc in which Tobias heads to prison to research the role of Frightened Inmate #2. Buster earns G.O.B.'s respect while setting the record straight re: chickens and their ability to clap. George Michael questions his father's love, only to have it confirmed by the federal government. So, put your heads down and power through another episode of ... Arrested Development.
posted by Lorin (5 comments total) 1 user marked this as a favorite
I love the whole sheep bit starting with Bob/baah in the copying room, continuing with them being up by The Good Shepherd bus, all the way to being picked up by an actual shepherd. The song that accompanies the staff, Get Along Little Sheep, reminded me of how good the music on this shop often is.

And Michael following tradition and eating a cornball during his fast/son bikeride was great too.
posted by bjrn at 11:20 AM on August 4, 2014 [1 favorite]

Or on the show... whatever.

I do wish there were some longer versions of Big Yellow Joint and Discipline Daddy though. For the latter the longest version I've found is this one and a half minute mix, which is pretty darn funky.

For more official songs, someone put up the whole "Music and Songs from Arrested Development album on YT here (but I bet that'll get pulled down eventually). If you listen (or skip around in) that album you hear how diverse the music is with joke songs, serious songs, and just small little ditties all together.
posted by bjrn at 1:32 PM on August 4, 2014

Buster: I need a different job. I’m having real trouble in a confined indoor space. (Hey, coworker!)
Michael: How do you feel about working outdoors?
Buster: Uh ... what else do you have?
posted by John Cohen at 9:36 PM on August 4, 2014 [2 favorites] 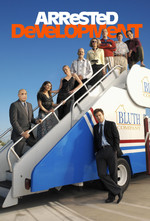