Cullen awaits the birth of his baby, laboring under The Swede's thumb at Fort Smith. Durant deals with the fallout from a railroad accident.

Durant is still incompetent. Elam is still dead. Bohannon is still at Fort Smith (but for how long?) having a beard-off with the still-incognito Swede (who is still Norwegian). Mickey and Durant are still in cahoots.

The new Mrs. Bohannon is played by a new (and older-looking) actress, Cheyenne gets a new casino and newspaper, Mrs. Palmer and Durant are less friendly, and General Grant is back to drinking in public.
posted by The Underpants Monster (1 comment total) 2 users marked this as a favorite
I'm enjoying HOW, trying to keep up and simultaneously rewatch the whole thing. I'm going to miss Elam and hope they can just miraculously resurrect him in the time-honored way--don't even need a new gimmick. The Swede is more terrifying than ever.
posted by Anitanola at 1:47 PM on August 31, 2014 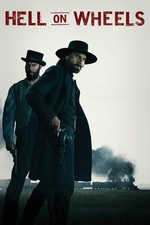