An enslaved doctor and his comrades in chains escape and become pirates of the Caribbean.

"Robert Donat was cast in the title role, but couldn't complete it because of chronic health health issues. 'Leslie Howard' (v) was second choice but was either unavailable or uninterested. Fredric March, Ronald Colman and Clark Gable were also considered by supervisor Harry Joe Brown. After George Brent, Brian Aherne and Errol Flynn were tested, Warners decided to take a gamble on the unknown Australian." (IMDb)

"This was a big gamble for Warner Brothers in 1935, as it was an expensive production, costing $1 million without any household names (both Errol Flynn and Olivia de Havilland became stars after the film's release)." (IMDb)

"The first of nine movies made together by Warner Brothers' romantic couple Olivia de Hadvilland and Errol Flynn." (IMDb)

"The first film to feature a musical score by Erich Wolfgang Korngold, one of Hollywood's greatest composers. Korngold was given three weeks to score the film, although during the day he was working on adapting the score of an operetta for Paramount called Give Us This Night (1936). He worked nights on the score for this film." (IMDb)

Film Trailer
posted by joseph conrad is fully awesome (8 comments total) 2 users marked this as a favorite
Thanks for the background. I had never heard that about Leslie Howard and Robert Donat (who is an actor I'm unfamiliar with). I'm trying to imagine Leslie in the role, and I think that's a movie I'd love to see. Not to take anything away from Errol, as I really think he's perfect for the part. But as alternative casting exercise, putting the Scarlet Pimpernel onto the pirate ship sounds like fun.

Okay, I'll admit I'm biased but this along with the Black Swan are what I think of when somebody says "pirate movie" to me. Those things with Johnny Depp in comparison are abominations. (Yeah, I know the MeFi rule about being positive and not slagging off other things, especially in early posts, but this is one I have to get off my chest.) There is just a magic to these kind of films that just works in spite of all the problematic bad stuff (colonial attitudes, slavery, sexism, etc.). I would say it's because I saw them first when I was a kid and fell in love with them, but while that's true for The Black Swan, I came to this movie as an adult. Maybe it's just that I'm conditioned to respond to the era and style and genre.

Can't wait to read the discussion about this. I wish I had something with more depth to contribute, but I'm just a fan. And when I saw it listed on the FanFare page, I said "wheee!" and jumped in, mainly to say thanks to joseph conrad is fully awesome for posting this. I can't wait to read the discussion about its good points and its bad ones.
posted by sardonyx at 8:30 PM on November 6, 2015 [2 favorites]

Oooh, are we on a Michael "Casablanca" Curtiz kick? Fully awesome you are, Joseph Conrad!

I always have to watch The Sea Hawk after watching Peter Blood, because, well, even though the plots and characters are totally different, they still feel like the same movie. In a really good way!

Flynn really is the best swashbuckler to ever swash a buckle. And Rathbone makes for one hell of a cool French pirate.
posted by valkane at 6:30 AM on November 7, 2015 [2 favorites]

I just listened to the You Must Remember This about Errol Flynn, and now I'm dying to see this. That sounds bad, because Errol Flynn comes off as sort of the worst person in the world (probably a rapist, at least according to the norms by which we would now operate; probably not a Nazi spy, just possibly manipulated by his best friend who actually was a Nazi spy), but I realized that I've actually never seen an Errol Flynn movie. I have such an image of what an Errol Flynn movie is, without actually having seen one. I'm going to watch this on Amazon later on today.

Olivia de Havilland, by the way, is still alive and is everything you'd want a 98-year-old former movie star to be.
posted by ArbitraryAndCapricious at 6:39 AM on November 7, 2015 [1 favorite]

If you want to make an afternoon out of it, you simply have to pair it up with his version of Robin Hood. It's even the one Bugs Bunny references.
posted by sardonyx at 7:14 AM on November 7, 2015 [3 favorites]

That was fun! Historically confusing and racially weird, but fun!
posted by ArbitraryAndCapricious at 1:41 PM on November 7, 2015 [1 favorite]

Love this film. It's one of those "flipping through the channels and see it's on, so I stop and watch it" movies. It's really hard to pass up, even though I've seen it about a bajillion times.

I always have to watch The Sea Hawk after watching Peter Blood, because, well, even though the plots and characters are totally different, they still feel like the same movie. In a really good way!

Oh, lord, yes. This is possibly because, in addition to being Curtiz films, both movies are based on novels by the same author, Rafael Sabatini.

I would possibly follow-up those two with The Private Lives of Elizabeth and Essex, also a Curtiz/Flynn/DeHavilland movie, and with Bette Davis thrown-in for good measure.
posted by Thorzdad at 8:09 AM on November 8, 2015 [1 favorite]

...Is it me, but....is there a surprising lack of pirate stuff in a movie that's supposed to be about pirates?
posted by EmpressCallipygos at 8:48 AM on August 3, 2018 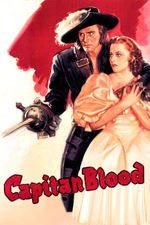