Young Stewart Lipinski is made captain of an exploratory space mission into space... his older sister Karen is made his second in command, and is none too happy about it. When their ship and crew stumble into a different universe with no way home, Stewart and Karen have to figure out their differences in order to survive.


Tired of making a faster-than-light jump every thirty-three minutes? Make a jump to another episode every twenty-seven or so minutes on Yahoo Screen's original comedy series created by Paul Feig.
posted by infinitewindow (11 comments total) 2 users marked this as a favorite
I was inspired to do this FanFare by 256's Rewatch post on Battlestar Galactica and the recent Aziz Ansari post on the blue.

My overall take on this episode: a little too exposition-y, a little too pilot-y.
posted by infinitewindow at 4:40 PM on November 10, 2015

I liked this series -- it was clearly intended to ape Red Dwarf in aesthetic and writing, and it largely succeeded at least in evoking that DIY feeling (albeit not the quality). But yeah, this episode could have used a little less setup. Rule of thumb: if your sitcom has so many characters with so much backstory that you can barely cram them and it all into the first episode, then cut someone.
posted by Etrigan at 6:53 PM on November 10, 2015

The writers tried heroically to shoehorn everyone in. Kent comes off as just weird, Michael doesn't get anything other than nebbishy until the episode's last scene, and wtf, how could anyone completely forget Chad from auxiliary deck?
posted by infinitewindow at 8:29 PM on November 10, 2015

I only discovered this a week ago, and I'm up to Ep 3. It's hilarious, if you discard the DIY and "try hard" style.

That their entire food supply is fudge just has to be an in-joke from something.

FYI, I'm planning on adding new episodes alongside BSG in FanFare.
posted by infinitewindow at 7:09 AM on November 11, 2015 [1 favorite]

I've seen the whole series and loved it. I'd advise sticking with it.
posted by urbanwhaleshark at 2:08 AM on November 14, 2015

I kind of wish those two were sitting on chairs making fun of the rest of the show, but I'll see what I think after the second episode...
posted by mmoncur at 1:47 AM on November 17, 2015

So per the discussions about the orville on the blue, someone linked to this article and that article linked to the show's tumblr, which has direct links to Yahoo's streaming pages for all the episodes! I'd never heard of the show and I'm watching now!
posted by numaner at 2:11 PM on September 12, 2017 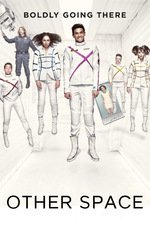