The life of a divorced television writer dating a teenage girl is further complicated when he falls in love with his best friend's mistress.

"It is at the same time a breathtaking hymn to the idea of being in love in Manhattan, a place Allen loves. The opening shot is a stunner, looking West across Central Park at dawn while Gershwin's 'Rhapsody in Blue' does what it always does–makes us feel transcendent. The locations are like an anthology of Manhattan shrines: The characters visit the Guggenheim, Elaine's, Zabar's deli. They sit on a park bench at dawn beneath a towering bridge, and ride a carriage through Central Park, and row boats in the lagoon. They go to art movies and concerts and eat Chinese food in bed and play racquetball. Allen knows that songs are the soundtracks of our lives, and gives us not only 'But Not for Me' but 'Sweet and Lowdown', 'I Got a Crush on You', 'Do Do Do', 'Lady Be Good', 'Embraceable You', 'Someone to Watch Over Me' and, when Isaac runs and runs to the girl he finally realizes he loves, 'Strike Up the Band'.

"All of these locations and all of these songs would not have the effect they do without the widescreen black and white cinematography of Gordon Willis. This is one of the best-photographed movies ever made, and a compelling argument for letterboxing on home video, since many of the compositions exploit the full width of the screen. Consider, for example, the sweet little conversation Isaac and Tracy have in his apartment, in a pool of light in the lower left corner of the screen, while the empty apartment stretches out toward a spiral staircase on the right: How better to show Tracy bringing life into this vast but lonely home?

"Some of the scenes are famous just because of Willis' lighting. For example, the way Isaac and Mary walk through the observatory as if they're strolling among the stars or on the surface of the moon. Later, as their conversation gets a little lost, Willis daringly lets them disappear into darkness, and then finds them again with just a sliver of side-lighting."

"What's most authentic about Manhattan is its fantasy. The New York City that Woody so tediously defended in Annie Hall was in crisis. And so he imagined an improved version. More than that, he cast this shining city in the form of those movies that he might have seen as a child in Coney Island—freeing the visions that he sensed to be locked up in the silver screen. In a way, Manhattan is Allen's personal Purple Rose of Cairo—the movie in which he successfully projects himself into Hollywood make-believe. It's his version of an Astaire and Rogers musical, as romantic as Casablanca, as slickly metropolitan as Sweet Smell of Success. It's also as haunting a celebration of the transitory as a Lumiére actualité.

"Manhattan's last shot, concluding an exchange between Isaac and Tracy as she leaves for London, has been compared to the miracle of recognition that ends City Lights. I read it differently; it doesn't seem an open ending. There's no question that something is over. Youth fades. Love never lasts. Everyone is forever trying to retrieve the past. Only the skyline remains. Allen's subsequent attempts to recapture Manhattan have often been embarrassing, but he (and we) will always have this."

Links
How to be a fan of problematic things
Manhattan - Opening scene (Woody Allen, 1979) [YouTube]


Yale: "You are so self-righteous, you know. I mean we're just people. We're just human beings, you know? You think you're God."
Isaac: "I gotta model myself after someone."
posted by joseph conrad is fully awesome (4 comments total) 3 users marked this as a favorite
This is the second film in the 1979 film club - come join us and volunteer for a film if you'd like! (announcement post)
posted by joseph conrad is fully awesome at 2:52 PM on November 17, 2015

What a great looking movie about terrible people. I'm taking an intermediate photography class and working on B&W right now so Willis' cinematography is like catnip to me, what a totally gorgeous film. I love how many rules the photography breaks, lots of shots without light on the characters while they're talking and a quick scene in total darkness instead of "movie darkness".

I did laugh quite a bit, I loved the scene with Woody standing next to the Australopithecus skeleton and he character was much less annoying than he usually is. That said, it's still a little tough to take a romantic comedy about a near-pedophile. It doesn't help that Hemingway is so bad in this, if she'd been this super dynamic powerful character, maybe Allen would seem less creepy but she barely seems to be able to get her lines out.

It might be interesting to follow this up with a watch of Fosse's Star '80 staring her as a the teen girl-friend of another new Hollywood director, Bogdanovich, and her horrible tragic end.
posted by octothorpe at 4:18 AM on November 18, 2015 [5 favorites]

The best opening sequence of any movie, ever.

But, as much as I love Woody Allen, even without the benefit of hindsight regarding future events in his life, I found the pairing of a middle-aged man with such a very young woman problematic. I was 20 when the movie came out and I couldn't find anything believable about their relationship.

The film was tedious. I absolutely loved "Annie Hall," and this was such a letdown! My husband thinks this was his transitional film from comedy to serious drama, and thus had not yet mastered drama. I agree, so many films right after "Manhattan" are good. But the cinematography was great, but I prefer "The Godfather."
posted by honey badger at 8:23 PM on November 20, 2015 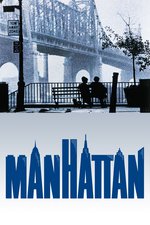