A small pot dealer is robbed of his money and stash, some of which he owes to his wealthy drug lord supplier. Brad Gurdlinger, the drug lord, forces him to smuggle marijuana from Mexico as a solution to clear his debt. Realizing that one man attempting to get through customs is too suspicious, he hires a stripper neighbor, a runaway and petty thief named Casey, and his 18-year-old neighbor Kenny , to pose as a bogus family called the "Millers".


Funniest movie I have seen the last few years, know what I'm sayin?
posted by growabrain (9 comments total) 1 user marked this as a favorite
A lot of the humor is based on the two identities and how they interact with each other
posted by growabrain at 9:03 PM on November 19, 2015

This movie was a lot of fun. 'Twas nice to see Ed Helms as a villain. And Emma Roberts was unexpectedly great.
posted by infinitewindow at 9:39 PM on November 19, 2015 [1 favorite]

No movie in recent memory has surprised me more. That spit-take in the airplane scene is perfect (and I respect a well-done spit-take)! Kathryn Hahn is excellent as usual.
posted by rhizome at 11:11 PM on November 19, 2015 [1 favorite]

I'd like to hear why this movie is so enjoyable: Obviously it's for stoners and obviously it's very funny... The use of background music is superb... The acting is nuanced and spot on, etc.

Many of the small joys re-watching it is how well they use the bit players, the folks who has a few seconds of screen time, maybe a line or two, whose main function is to support the main characters or advance the plot. The truth is that more often than not, you absorb their faces, their ticks, and their hand movement without noticing how much they add to the story.

I'd like to start making making space for some of those actors. Like it is said before, some of them actors have small rolls in hundreds of movies, and it's fun to search for them, if you have nothing better to do.

So here are a few:

"Rick Nathanson"
"The TSA Agent"
Man at the barber - "Here"
Ben Folds as the piano teacher
and of course Luis Guzmán as the gay Mexican cop
posted by growabrain at 1:21 PM on November 20, 2015

This was surprisingly okay, I mean for a kind of guilty pleasure comedy, like Wanderlust*. I keep trying to get people to watch Your Highness, and Hell Baby, I'm not even sure if I'm kidding.
posted by nom de poop at 6:32 PM on November 20, 2015

I liked this movie far more than I expected to, and not just because I could lift the clip of Sudeikis saying "Don's a badass" to send all my friends.

One thing I remember noticing was that they managed to have really batshit behavior - Aniston flinging the "pot baby" into traffic, for example - and excuse it to others in a way that was at least marginally believable. Add to that the fact that they seem to have some actual affection for some of the characters that are butts of jokes for their personalities. Offerman's Don is held up as laughable but still has worth beyond what he can do for the protagonists.
posted by phearlez at 7:14 PM on November 20, 2015

I also enjoyed this movie way more than I was expecting. Laughed my fool head off.
posted by cadge at 6:51 PM on November 22, 2015

OK, what are we doing today?

Yeah. I say, give me somethin' that says, 'I get up every morning at 5:30 and commute for an hour and a half to some bullshit job where my jag-off boss expects me to kiss his balls all day just so I can afford to keep my ungrateful, screaming kids decked out in Dora the explorer shit and my wife up to her fat ass in self-help videos until the day I get up the courage to put a shotgun in my mouth.'
posted by growabrain at 12:59 PM on March 29, 2019 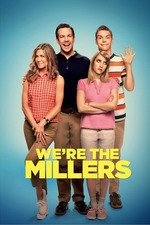