Second Foundation is the only one of the original Foundation books that feels like a coherent whole. The two parts, originally titled "Now You See It—" and "—And Now You Don't", feel like they were conceived in one go. Nevertheless, they are quite different from each other, even if both center on the hunt for the elusive "Second Foundation" set up by Hari Seldon. The first section, "Search by the Mule" might just be the weirdest story in the original Foundation trilogy. It brings to an end the narrative of Han Pritcher and The Mule from the previous story, and climaxes in a psychic duel that feels like something out of E. E. "Doc" Smith's Lensman series.


The final confrontation goes back to the theme that's run through the series from the very first story, that clever thinking beats brute force. In this case, however, the struggle takes place within the framework of psionics (a term coined after the series was written). In fantasy terms, we've got a well trained magician of limited power, facing a magician with immense strength, but little training.

The thematic link aside, the story feels a bit unsatisfying. Han Pritcher is a lot more interesting as a happily unwilling servant of The Mule than as the cookie cutter tough guy he was in the previous story. His denouement is perfunctory at best. And The Mule is a much more sympathetic character than the First Speaker, who comes across as a pizzazz-less Bond villain, weaving a ludicrously intricate web to entrap a foe. Am I the only one who feels like the First Speaker's plan is just much too risky and complicated to make sense?

On the other hand, this story has a lot going for it. I've always liked Rossem as a setting. It broadens the canvas of the world without being flashy. That said, Asimov never did settle for one small village when an entire planet full of small villages would do. The structure, with its interludes set on the Second Foundation, builds tension effectively. Also, I quite like the interludes themselves, with their clunky mental speech and hints at what will happen. The Second Foundation comes off like a monastery, filled with worldly old masters and young, fervent novices. It's hard to think that it's anywhere physical.

And, indeed, the story climaxes in an unphysical battle. The two magicians thrust and parry until The Mule drops his defenses momentarily, allowing the First Speaker his decisive blow. The scene isn't without its charm, but it's the furthest the series had gotten from its beginnings, rooted in the real history of humanity. It's no wonder that Asimov turned away from that in the latter part of Second Foundation.

But I like the story for allowing the reader to spend time with The Mule in the fullness of his power, ruling one-tenth of the galaxy. He's supposed to be a villain, but he's just so charming and personable that compared to his rather flat antagonists, he's hard not to sympathize with. He's essentially a one-man Foundation, using his special power to unite an enormous empire under his rule. While the Foundation's power is psychohistory, the Mule's is psionics. I have a hard time seeing why one is better than the other. Having people's will thwarted by a single person's psychic manipulation isn't much worse than having it be thwarted by the manipulation of the laws of history.

Does anyone want to make the case for The Mule being worse than the Foundation?
posted by Kattullus (6 comments total)
I'll come back to this later as is my wont, but I always figured the Foundation's Second Empire would have psychohistorians who could minimize the suffering of the population as a whole if they wanted to, whereas the Mule's empire would collapse at some point after his death. Give a man a fish and all that.
posted by infinitewindow at 6:21 PM on November 20, 2015 [1 favorite]

Well, in the original conceit--when the Foundation was just really good at history, sociology and statistics--the laws of history aren't actually thwarting anyone's will (unless your "will" is to conquer a planet or something, and even then you still get to try if you want to). Everyone does what they want, just the situation is set up to give a good outcome. The Mule was the one using mind control to actually impose his will on individuals.

Of course, as it actually turns out you don't even get that--people are manipulated on an individual level . You're light years (no pun intended) from where you started. It's not about the inexorable march of history, it's about the Space Illuminati.

One of the reasons why I consider the trilogy so overrated. The first one and half books are an interesting idea, some good moments but unevenly executed. Then the idea is jettisoned so you just have spotty writing.
posted by mark k at 1:40 AM on November 21, 2015 [1 favorite]

Does anyone want to make the case for The Mule being worse than the Foundation?

Well, it's kind of like making the case that Alexander the Great was worse than the alternative. Sure, he can conquer, but it's all going to collapse after he dies- or worse, a line of psionically-powered people may arise and divide the galaxy between them.

Then again, I'm not sure the desired end result, a galaxy-spanning empire is all that great a goal to aim for. Seriously, one of the great weaknesses of Foundation is the belief that the proper end-goal of civilization is basically an aristocratic dictatorship. And frankly, it's a really nasty reactionary attitude that's been corrupting Science Fiction for decades.
posted by happyroach at 1:11 PM on November 21, 2015 [1 favorite]

happyroach, your concerns are addressed directly in Foundation's Edge, but strictly speaking that's not part of the trilogy.

I think the idea of a unified Empire is one very much inspired by Roman History. And it has something going for it, in that a strong unified Empire should suffer from relatively little conflict, and thus everyone can go on living their lives. The Mule in this case is something like Augustus, an extremely strong figure who can unite the Empire under his will, but who is incapable of producing inheritance, leading to inevitable problems as his heirs are insane. The Second Foundation can be seen to represent the Senatorial class of Rome, a group of people who believe they represent the true Roman way, but in many ways are just as over privileged and unrepresentative as the Emperors who dare to grab power.
posted by Cannon Fodder at 6:08 AM on November 23, 2015 [1 favorite] 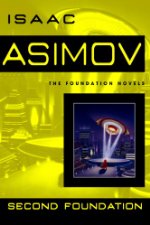