In the imaginary science of 'Pataphysics there's the concept of the "clinamen", or "swerve". As method in the arts, it can be roughly paraphrased as: "To create art you must first create a system. Once you have the system, you must introduce an anomaly which brings the system into a state of chaos. Then you have art." To put it bluntly, until writing "The Mule", Asimov's Foundation series was a perfect system, described by the imaginary science of psychohistory. Things were moving predictably to a predicted end. But then there came a swerve, in the form of "The Mule", a warlord not predicted by Hari Seldon. And in the titular character, Asimov created one of the most interesting anti-heroes of early science fiction.


The Mule is a kind of inversion of Salvor Hardin. He uses his brain to defeat a seemingly overwhelming force, but instead of outsmarting them, he manipulates them using some kind of mental power. What's especially interesting in the story is that he's clearly the only one. He's just one lone mutant, one lone swerve in a universe of atoms moving predictably.

The idea of the "clinamen" goes back to the atomic theories of the Ancient Greeks. The idea was that in the beginning there was nothing but atoms, and they all fell downwards in a straight line. And then one swerved, and introduced chaos. The Mule is that one atom swerving in defiance of the gravitational force of psychohistory. What follows from that one swerve is worked out just as logically as everything else in the Foundation series. But because the previously predictable system is now utterly disordered, it becomes impossible for a first time reader to see where things are headed. Still, following all the twists and turns of the story is easy to follow and swallow for a reader whose expectations have been shaped by the previous Foundation stories.

You can tell that Asimov is having fun with this story, liberated from under the thumb of Hari Seldon. Magnifico Giganticus and Ebling Mis are entertaining figures, and Toran and Bayta Darell are the least dull of the dull cookie-cutter protagonists Asimov sprinkles through the stories. The narrative barrels along from set-piece to set-piece, hardly letting the reader come up for air. After witnessing the slow strangulation of Bel Riose by Seldon's dead hand, it's something of a relief. And by the end, nothing is as it ever was, nor can it ever be the same again.

By smashing his perfect system, did Asimov ruin a beautiful thing, or did he turn a mildly diverting clockwork into a living, breathing world?
posted by Kattullus (9 comments total) 2 users marked this as a favorite
This is the first story in the series that isn't either The Forties In Space or The Romans In Space, but something new and different. It shouldn't work, especially when compared to better-written, better-plotted stories, and yet it does!

Even though it starts out with the same underhanded political machinations as the other stories (there's a nice in-joke with the two Haven plotters being basically the same and given almost the same names), very quickly "The Mule" veers off the rails. When I first read this in seventh grade, even then it jarred me to see characters talking so much about one almost-mythical man who was clearly not an Emperor or Hari Seldon—this in itself definitely was an indication that the Seldon Plan was in big trouble. Probably my favorite part was when Seldon makes an appearance and drones on about a civil war that was being planned until the Mule began making waves. (If I recall correctly, Seldon never cracks another joke about allowing people to smoke in the Time Vault ever again, thank goodness.)

The characters:
Asimov has created far more interesting characters by leaps and bounds here. Indbur III is ridiculously ineffective at everything except inspiring contempt (I think Asimov went a little too far there). Han Pritcher is fascinating to watch: he starts as a nebbishy intelligence analyst, becomes a Bourne-esque suicide assassin, and ends up a loyal colonel to the Mule. Fran and Randu—to be honest, I wouldn't be able to tell them apart if they both had all their arms. Ebling Mis—one wonders if he was actually saying "unprintable" in Galactic Standard, or if he had to be censored by Asimov.

Magnifico's kicked-dog manner really drives home the intense fear the Mule wields so skillfully. Toran is built-up as an old-fashioned man's men, so I get a real kick out of the realization that the Mule was conditioning him throughout the story to be far braver and red-blooded than he actually is. Poor Bayta is basically treated as "Toran's girl, what's-her-name" in the beginning—much as one might expect Asimov to treat any female character in the earlier Foundation stories—but is fascinating for the same way the Mule is fascinating: because EVERYONE underestimates her all the time (not just the men, but the other women in Haven's equivalent to the WAAF as well). Han may have the character arc, Toran may have a square jaw and strong pecs, but this is Bayta's story, and happily, she carries it successfully.

To answer your question, Kattullus, for me, this story definitely turns old long-nosed Pinocchio into a real, live boy. No other climax in the series even comes close to working as well (well, Foundation's Edge, maybe).
posted by infinitewindow at 10:14 PM on November 14, 2015 [2 favorites]

It's worth noting that the Mike is actually the second clinamen in the Foundation series, but I didn't really realize that until decades after reading the series. It's really cleverly out in plain sight, too.
posted by happyroach at 3:51 AM on November 15, 2015 [1 favorite]

The question is, what would have happened to the Empire if Harry Seldon hasn't come along? It would have collapsed all the same, but there wouldn't have been a First or Second Foundation and the dark age would have lasted much longer.

So it's weird, because Foundation puts the lie to its premise in the first story.
posted by happyroach at 10:18 AM on November 15, 2015 [2 favorites]

Yes, that's a good point. The whole series is the examination of a swerve. By formulating psychohistory, Hari Seldon creates a swerve in the system the science describes. It's the Observer Effect writ very, very, very large.

I'm not entirely sure what that something else is, however.

It's people, real people! Which is probably a good thing for a 24-year-old chemistry student to be writing about in his spare time.

Minor spoiler alert: the rest of the trilogy (if not the entire series) is about the extraordinary effort by relatively ordinary individuals to put the Seldon Plan back on track and keep it working, and how really difficult that is. Up until this story, it's been about shrewd dudes riding the right wave to make history (and occasionally failing, like both Imperial Bel Riose and Foundation Trader Lathan Devers, who died in a decidedly-non-democratic slave mine eighty years prior to this part of the story). The Foundation Trilogy is still a story about engagement versus isolation, but from here on it takes on an added aspect of creation versus decay or destruction, something that Asimov rather artlessly made explicit in further non-trilogy volumes.
posted by infinitewindow at 5:25 PM on November 15, 2015 [1 favorite]

Foundation and Empire was the first sci-fi book I remember where a woman was at the forefront of the story. When you read the Mule part of that book for the second time, it's surprisingly clear that Bayta is the protagonist. I didn't get that when I was fifteen.

That's a good point. This is definitely the point where, in the early Foundation stories, Asimov stops writing about ideas and starts writing about characters in the universe he's created.
posted by Kattullus at 4:35 PM on November 16, 2015

Having recently read through all the Robot and Foundation books, I'm conflicted about this story. On the one hand, it's my favorite Foundation story, with some great narrative tricks and a brilliant way out of the "Nothing can tamper with the manifest destiny of the Foundation" issue that threatened to make it increasingly hard to write any more Foundation stories. On the other hand, it marked the beginning of the end of one thing that I really liked about the Foundation stories: people being placed in tough situations, wracking their brains, coming to some good decision on their own, and executing it. From this point on, the Foundation books become increasingly polluted by mind control, to the extent that you can't trust that anyone is coming up with any idea on their own. Rather than come up with a new brilliant way to work around this new issue, Asimov seems rather to have embraced it instead. It makes the rest of the Foundation books (to differing extents) hard for me to take seriously or care much about.
posted by dfan at 4:24 PM on November 19, 2015 [1 favorite] 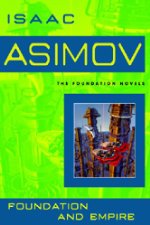