Joe and Juliana must act quickly as a vicious bounty hunter known as The Marshal arrives in Canon City. Tagomi makes plans with Wegener to pass valuable secrets from the Reich, and Frank plots his revenge against the Japanese.


I'm going to add new posts for each episode every two or three days. This is the first additional episode released when the full season became available and it's pretty good, with a very sinister turn by Burn Gorman as 'The Marshal'.
posted by Happy Dave (8 comments total) 2 users marked this as a favorite
I like Burn Gorman, but I think that he was miscast a little here. I can accept maybe his accent would work for viewers who don't know he's British, but...the dude is just not an intimidating presence. The lawlessness of Canon City seems like it should work both ways, leading me to wonder why no one just takes this guy's gun away from him and kicks his ass. Joe, Lem, and especially Juliana all seem pretty capable of doing that.
posted by kittens for breakfast at 6:02 AM on December 2, 2015 [1 favorite]

I was definitely mixed on 'The Marshall.' Perhaps guns were just as hard to come by in the neutral zone, though I find that more difficult to understand. He managed a certain menace, but I agree, if someone is too much of a menace then we might have expected someone to do something. The only other explanation is that everyone knew he was connected to the Nazis and that made 'fixing' the problem harder.

A lot of this episode goes to Frank, having to deal with his sister and her children's death. I wanted to slap his brother-in-law with a dead fish, as he seemed more worried about appearances and doing the 'right thing/' than actually honoring his family's death.

The German agent, I enjoyed, as it seemed at first his hints were adding up to him being the contact. At least the judo came in handy.
posted by Atreides at 7:54 AM on December 2, 2015 [2 favorites]

I thought The Marshall was the worst part of the season. You just have to get past him to get to the better stuff.
posted by Catblack at 9:31 AM on December 2, 2015 [2 favorites]

I generally liked Burn Gorman as the Marshall but I've only known him from The Dark Knight Rises and Game of Thrones. He came through as rather menacing and like he was vaguely connected to people in power outside of the neutral zone (which means he probably could make life difficult by drawing in outside power - something I suspect they'd like to avoid). The deck of cards and the bookstore owner was very creepy and well done.

Frank and the aftermath of his sister's death was horrible. It would have been worse emotionally if his brother-in-law weren't the world's biggest jerk about his wife and kids dying. Ed is something of a mystery to me starting in this episode. I have a hard time seeing his roll in the larger plot other than being Frank's loyal friend. That's a nice person to have in the show but I don't really see how he plays into the larger plot at this point (and no character with this much screen time is there as a benign backdrop).

Juliana is kind of a loose cannon here, chasing after any possible lead on the film and resistance. If not for her main character status, I'm pretty sure a person conducting random acts of investigation would have died by the end of the episode.
posted by toomanycurls at 11:38 AM on December 2, 2015 [1 favorite]

Smith has a Christopher Walken-like accent. It adds to the character.
posted by otherchaz at 8:23 AM on December 15, 2015

I am just watching the series now... and the Marshall was the first character that struck me wrong, he's just too broad. Now the SD agent, he was fairly subtle, the bookseller, the cafe owner but the Marshall is a caricature.

Julianna and Joe are sympathetic but not very interesting. It really bugs me that after doing so much impressive world-building, backgrounds, cars, tv programs, that she looks absolutely contemporary.
posted by TWinbrook8 at 6:37 PM on January 10, 2016

I was so tickled that Gorman got that accent right (who knew he had it in him?) that I sort of glossed over his actual performance. (The only really bit that I caught him bombing was the word "anything" which he pronounced with a very UK "ennuhthing.")

That said, I can kinda see how either a more legit intimidating presence if they intended to play that straight, or some cue from Gorman or the writing that he was supposed to be dangerous but sort of pathetic, too, might have been better.
posted by DirtyOldTown at 10:48 AM on January 18, 2016

Julianna and Joe are sympathetic but not very interesting. It really bugs me that after doing so much impressive world-building, backgrounds, cars, tv programs, that she looks absolutely contemporary.

I agree that at least so far these characters are not that interesting, but I thought Juliana was doing quite well exemplifying the look of the early 60s. Just before coming here to read I googled "young Lauren Bacall" and yeah, my hunch was right, that is who she is reminding me of.
posted by Meatbomb at 6:30 AM on February 20, 2018 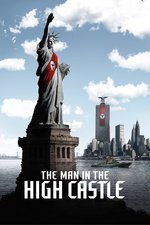