Affluent Millicent and Oliver Jordan throw a dinner for a handful of wealthy and/or well-born acquaintances, each of whom has much to reveal. Available to stream on VUDU and Amazon Instant Video.


Directed by George Cukor and featuring an ensemble cast of immensely popular MGM stars, “Dinner at Eight” was adapted for the screen by Frances Marion and Herman Manckiewicz from the hit Broadway play of the same name. The movie, a comedy of manners about secrets and lies among the wealthy, was shot during the special session of Congress that gave birth to the New Deal.

The play, written by George S. Kaufman and Edna Ferber, opened on Broadway in 1932 without a prior tour. Critics and audiences were delighted and the show ran for 212 performances. MGM bought the rights and banked on the property as a fitting successor to its all-star cast smash of 1932, “Grand Hotel.”

“Dinner” was given to first-timer David O. Selznick to produce. Selznick responded by issuing an edict to MGM top brass to “get to work.” They responded by lining up major stars like Marie Dressler, both Barrymore brothers, Jean Harlow, and Wallace Beery. Cukor, still fairly new to the director’s seat, was signed on as well.

Some contributions of note:

Marie Dressler as Carlotta. Dressler, now familiar mainly to students of the classic Hollywood era, was at one time one of the highest-paid stars in Hollywood despite of, or perhaps because of, her age and appearance. Dressler was born in Ontario in 1868 and hit the road at the age of fourteen, appearing in light stage comedies and taking ordinary, non-theatrical jobs at times. Dressler’s first film appearance was Mack Sennett’s "Tillie’s Punctured Romance" (1914) alongside Mabel Norman and Charlie Chaplin. She played an important role in the formation of Actor’s Equity, an act that got her “blacklisted.” She’d fallen on financial hard times when her great friend and A-list screenwriter Frances Marion helped bring her out to Hollywood. The sound era dawned and Dressler found renewed fame in films like “Anna Christie” with Greta Garbo and “Min and Bill” with Wallace Beery. During the filming of “Dinner at Eight,” Dressler was ill with cancer. As Carlotta, Dressler is as unlikely a former femme fatale as could be imagined in some ways. But her chemistry with Barrymore as a former lover and current dear friend is unmistakable, and her great talent for physical comedy is seemingly undiminished by her illness. Note how Carlotta's upper-crust Continental accent waxes and wanes during the film depending on who's listening.

Jean Harlow as Kitty. Harlow (Harlean Harlow Carpenter) was the original Blonde Bombshell who’d scorched the screen in films like Howard Hughes’ “Hell’s Angels (1931) and “Red Dust” (1932) with Clark Gable. Harlow was very sexy on screen, but what those new to classic film may not know is that her comic timing, like Dressler’s, was impeccable. As Kitty, Jean’s scenes with gruff Wallace Beery as her husband are still laugh-out-loud funny today. (The line “Ya big wind bag!!!” is deployed frequently in the Tants household.) Harlow the woman apparently wanted very badly to be a simple wife and mother. But she continued making movies, suffering a fatal bout of kidney failure as she was filming “Saratoga” in 1937. Harlow was a much more complex person than her reputation as a “Bombshell” allows for. But she is unforgettable in her “hot” scenes too.

Frances Marion, screenwriter. Born Marion Benson Owens in 1888, Marion is known best today as the highly prolific screenwriter for some of Hollywood’s most bankable properties during the thirties, including the original “The Champ.” In fact, Marion wrote her screenplays to bring out the best qualities in MGM’s stars, including her friend Dressler, Greta Garbo, and Marion Davies. But Marion’s thirty-year career also included directing and editing: “The Love Light” starred Marion’s good friend Mary Pickford and her soon-to-be husband Fred Thomson in a spy drama that was hailed at the time as Pickford’s first “grown-up” role. On behalf of the U.S. government, Marion filmed women’s contributions at the front during World War I and was the first woman to cross the Rhine after the Armistice. Marion was known for treating everyone at the studio with respect and care, encouraging younger writers and arguing for better working conditions for them.

Dinner Is Served: The Return of MGM's Witty 30s Romp
The Fall and Rise of Marie Dressler
George S. Kaufman Play Catalog: Dinner at Eight
Women Film Pioneers Series: Frances Marion
posted by Sheydem-tants (2 comments total) 4 users marked this as a favorite
This movie has what is absolutely one of my favorite moments in cinema, Billie Burke's meltdown about the collapse of her dinner plans. (The clip cuts off before the climactic line, "You don't know what suffering is, either of you!!")

I think the thing about that bit is that, though it's played for laughs, she's absolutely serious about it. Because throwing a proper society dinner party in those days was a lot of work! 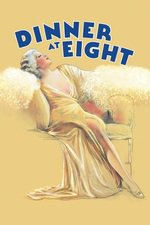