Confined in the castle tower by her father, Princess Arete spends her days watching the world outside her window. Sometimes she sneaks out to watch the common people at work.


Princess Arete (2001) was a film from Studio 4°C. It is based the story "The Clever Princess" by Diana Coles. Coles appears to be quite obscure in the West, but apparently the story is one of the most widely-read feminist fairy tales in Japan. It was directed by Sunao Katabuchi, who served as the assistant director on Kiki's Delivery Service and has a number of other films to his credit.

I had saved this movie to my list on Netflix a while ago, I believe on the recommendation of a Mefite although I can't find that comment now. It seems to have moderately good reviews, with many criticizing the slow pace. It is indeed a slow movie, but I found it absolutely enrapturing. It has the same virtue of some Ghibli films of telling a powerful story in a very quiet and understated way. It also, like many Miyazaki films, gives every character the opportunity to be somewhat human and vulnerable. The animation is fairly simple and is not showy, but I thought the character designs were quite good. The music is also excellent.

In particular, I found the implications of the story to be incredibly sad. Without spoilers, what we know about the wizard at the end of the film hit me very hard, especially as a parent.

In any event, I highly recommend watching the film if you have some patience and enjoy slower animated films. Note that if you watch on Netflix you may have to turn subtitles on manually. There is no dub.
posted by selfnoise (3 comments total) 4 users marked this as a favorite
My wife and I both watched that movie, and found it absolutely wonderful. It feels a bit like a Miyazaki film in the density of characterization and history, but without that element of bitterness that Miyazaki has. In fact, even the villain, when his motivations are revealed, comes across as sad and bewildered.

I would not call this movie slow- it is very deliberately paced, in a way that very few movies in this ADHD age are done, and it emphasizes the feeling of time passing. It takes the time to build up to the ending, and the position the heroine ends in is all the better for it.

The weird thing, is that though this post-disaster, it doesn't feel that way to the people in the film's present, either in the beginning of the film, or in the city at the end. They're living their own lives, and developing their own path. Which is really the message of the movie- don't be trapped by the past.

I also wish I could find "the Clever Princess" over here at something less than the obscene prices being offered for it. Damn publishers.
posted by happyroach at 3:16 PM on January 24, 2016 [1 favorite]

happyroach: This appears to be a bilingual(?) English/Japanese version of The Clever Princess, if you're willing to order from Japan. Could someone who can actually read Japanese confirm that, please?
posted by nicebookrack at 9:53 PM on January 24, 2016 [2 favorites] 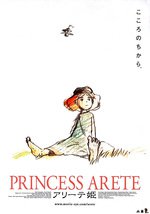