In turn-of-the-twentieth-century Japan, a young woman (Meiko Kaji) has been trained since birth to exact bloody vengeance on those who abducted and raped her mother and murdered her mother's family.


Trailer. I just watched a double feature of this and its sequel on the big screen (Nya! Nya! Nya!), but both films are available on Hulu Plus, Amazon and iTunes.
posted by brundlefly (4 comments total) 4 users marked this as a favorite
This looks great!
posted by rhizome at 10:43 PM on January 25, 2016

Stray snowflakes fall on the baby as the camera pans up to the barred window and the blizzard beyond; the snow turns red as the title Lady Snowblood flashes boldly on-screen. With three minutes of off-the-cuff cinematic shorthand, a strange, precarious universe is born: a mind-melting witches’ brew of Rosemary’s Baby, Lady Macbeth, and “Snow White.”

The morning has died
And the snow falls in mourning
A stray dog howls
And her geta clatter beneath her feet
She bears the weight of karma
As she walks gazing straight ahead
Embracing the darkness with her umbrella-sword
She walks the path dividing life and death.

It is a little distracting to finally watch this after seeing so much that's ripped this off. Fun movie though even if that garishly bright 1970s blood is pretty hilarious.
posted by octothorpe at 7:52 AM on January 27, 2016

I have been meaning to see this and finally did. I was afraid it was going to be plodding and leaden and sleazy, but really it wasn't, not so much! The martial arts scenes were not especially good, but the pace is good and but Meiko Kaji's face can easily carry the whole movie. 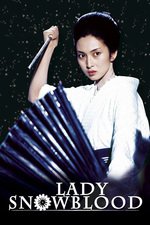