The group of free hubots splits up after the murder of an elderly couple, which is now investigated by the hubot crime task force E-HUB. During the attack one of the group, Mimi, was kidnapped. Leo ventures into the underground sex club Hubot Heaven in search of Mimi, where it is revealed that he himself is a human-hubot hybrid. Meanwhile the Engman's neighbors split up after husband Roger grew increasingly resentful of hubots and hit his wife.


Roger's wife Terese, their son Kevin and her hubot Rick subsequently move out. Inger Engman visits her friend Terese, where they have coffee with another friend, Pilar, and her lover hubot Bo. Grandpa Engman, Lennart, grows frustrated with his new hubot, Vera. He misses the company of his long time hubot Odi and instead of having the defective hubot dismantled at a disposal facility, secretly keeps him in his basement and even reactivates Odi.
posted by travelwithcats (4 comments total)
Isn't Leo's obsession or "love" for Mimi, unhealthy? More than just the loving a bot thing, if she had been a real nanny that he loved as a kid and became obsessed with as an adult, that wouldn't be normal behavior.

‎I do like the juxtaposition of Anita and Mimi.

Locator chips. As we currently chip humans, animals, and electronics, I'm assuming not outfitting the bots with such was a specific choice by the writers.

The bathroom scene with Leo was very surprising. I never got far enough in season 1 to find out if making himself part-bot was purposeful or not. Actually, I don't remember the dog being killed so I never finished this ep. ‎

Now that I know drowning people don't act as shown in movies, it bugs me a bit to see it.

Well, Neska, since you're a heartless murderer (literally), I kinda think humanity is right to fear and loathe you. I will agree that it is naive to think most people are good. However, believing humanity will hand themselves over is also naive--if not outright deranged bot thinking. Did nobody ever show Neska the Terminator movies? Tut, tut.  ‎

‎Leo kinda sucks at taking care of his bots.

I feel for the grandpa because I just know Odi is going to hurt someone. He's so obviously broken.

I know Asimov both crafted and showed the limits of his Three Laws of Robotics, but still somebody should get on that.
posted by Ik ben afgesneden at 1:44 PM on August 16, 2014

Yeah, it is weird since hubots don't age Mimi was Leo's nanny and became later his love interest.

As for the "nature" of hubots - they attained free will and act exactly as humans do, sometimes stupid, irresponsible or violent. I think the fact that hubots have distinct personalities and act freely is supposed to show that they are not that different from humans.
posted by travelwithcats at 2:53 PM on August 16, 2014

But how do you know they've attained free will? Has the show given definitive proof? You can program Hubots to say they have free will and act a certain way. I kinda think I'm coming down on the side of the Real Humans.
posted by Ik ben afgesneden at 3:21 PM on August 16, 2014

I think it's interesting that the symptoms of Odi's deterioration are manifesting in ways similar to the kind of mild dementia that Lennart is exhibiting - switching between memory loss and very specific long-term memory. Lennart has become Odi's therapist.

The writer has worked out what hubots can and can't do, and how they can be (illegally) modified to get round those restrictions, but it's not something he's explicit about in one data-dump.

I like the very odd ideas that turn up (like the idea that anyone would enjoy what is effectively playing Trivial Pursuit against a computer).

I also like the way that the different positions with reference to the hubots are sketched out - Inger and Hans's slightly bewildered liberal decency juxtaposed with Roger's virulent hatred and Pilar's ... um ... enthusiastic embrace of the new hubot world.
posted by Grangousier at 12:33 PM on August 17, 2014 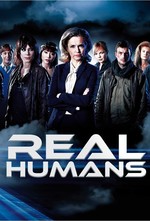