Spinal Tap, one of England's loudest bands, is chronicled by film director Marty DeBergi on what proves to be a fateful tour.


NYTimes: There's an in-joke quality to the film, one that will make it all the more hilarious to anyone at all knowledgeable about either the esthetic or the business aspects of pop music. However, you need not have heard a band like Spinal Tap to find its story highly amusing. The film traces the stages of its career, from early imitation-Beatle days (the musicians are seen on television, smiling sappily and wagging their hair) to a psychedelic period (they are seen flanked by go-go dancers and wearing beatific expressions) to the unfortunate present. Their American tour reveals them to be approaching their final stylistic incarnation, which involves screamingly loud solos, tight spandex pants and the use of a giant horned skull on stage.

Roger Ebert Original Review: The rock group does not really exist, but the best thing about this film is that it could. The music, the staging, the special effects, the backstage feuding and the pseudo-profound philosophizing are right out of a hundred other rock groups and a dozen other documentaries about rock.

Roger Ebert 'Great Movies' Article: There are two stories told in the film: the story of what the rock band Spinal Tap thinks, hopes, believes or fears is happening, and the story of what is actually happening. The reason we feel such affection for its members is because they are so touching in their innocence and optimism. Intoxicated by the sheer fun of being rock stars, they perform long after their sell-by date, to smaller and smaller audiences, for less and less money, still seeking the roar of the crowd.

This is even more 'Spinal Tap'

Eleven trends predicted by 'This is Spinal Tap' (warning, clickbaity)

The origins of Spinal Tap: Watch the 20 minute short film created to pitch the mockumentary

Listen to the Flower People

Hell Hole
posted by MoonOrb (19 comments total) 16 users marked this as a favorite
Let's not forget their appearance on The Simpsons!
posted by Pope Guilty at 8:06 PM on March 21, 2016 [1 favorite]

The in-character commentary on the DVD is spectacular. They spend a lot of time talking about how Marty is tricking them during interviews.

Also, I have been known to rename projects "Jazz Odyssey" when they switch gears. Sadly, nobody ever gets it.
posted by fifteen schnitzengruben is my limit at 8:53 PM on March 21, 2016 [6 favorites]

Also the DVD has an extended scene where you can see that the mimes at the party are Dana Carvey and Billy Crystal.
posted by fifteen schnitzengruben is my limit at 8:54 PM on March 21, 2016

I used Spinal Tap clips to illustrate the importance of quality specifications in a class I taught.
posted by phearlez at 8:21 AM on March 22, 2016 [3 favorites]

I love this movie and I'm building a practice amp as a project with my kids right now to play with guitars and electronics at the same time. The dials are all these because why wouldn't we? Somehow it's one of the few constantly quoted and referenced movies that never gets old to me.

Every time I watch a segment of this movie, I am reminded anew how very smart the script is, beyond the surface layer of "st00pid rock star" that the actors lay on.

The casting was good, yes, and the fact that the lead actors can all play their instruments well helps, but the dialogue is deft and the acting is just fantastic. Like, the vacuous look on Guest's face in the "goes to eleven" scene had to have been a real effort not to crack up or betray any functioning intelligence.

Just yesterday I yelled into my slowly-opening garage door, "Hello Cleveland! Rock and roll!!"
posted by wenestvedt at 9:57 AM on March 22, 2016

"You don't do heavy metal in Dobly" is actually proudly displayed on the wall in Dolby's headquarters . We also have a wall filled with with amplifier volume controls, at least one of which goes to 11.
posted by TwoWordReview at 10:20 AM on March 22, 2016 [4 favorites]

One of my kids, who turns 12 today coincidentally, and I recently took the train to visit friends in another state. While we were there, they introduced him to Rapper's Delight (which one of my friends can sing in its entirety), The Producers, and This is Spinal Tap. Watching my kid crack up as he watched Spinal Tap for the first time was one of the great parenting moments.
posted by not that girl at 4:19 PM on March 22, 2016 [2 favorites]

This movie was, in all utter seriousness, a major formative influence on my life. Me and my high-school bandmates watched it once a month, at least, for two and a half years. Watching it was a regular post-gig ritual for us. Spinal Tap just perfectly captures the feel of a gig or a band going horribly awry, where it's 50% your own stupid fault, and 50% somebody else fucking up, and 50% just "Shit happens." That's an important lesson to learn when you're considering going into the music business. It's probably been a decade since I've actually watched the whole thing through, and I feel pretty sure that you could pop it in and I could recite almost the whole thing right along with the actors.

One of the high points of my life was getting to see them live. Yes, they can all really play and sing.

I worked at a movie theater where they held a pre-release screening of this for a test audience. It was simply called "Spinal Tap" at the time. Rob Reiner was there checking out audience reaction.

As people filed out after the screening I heard one guy say to his friend "If they wanted to make a documentary about a band, why didn't they pick a band anyone's heard of?"
posted by under_petticoat_rule at 11:48 AM on March 23, 2016 [4 favorites]

Got a chance to watch this again last night (it's on Amazon Prime right now) and it's even funnier than I remembered. There's more foreshadowing than I recalled, like a lingering shot on the crotch of Derek Smalls' pants in the scene before the cucumber is revealed.
posted by Pope Guilty at 7:28 AM on March 27, 2016

I watched it again last night on Prime (available I think only until the end of the month) and noticed that exact same thing, Pope Guilty.

I also better appreciated the joke inherent in the band's music: they had no style of their own but just drifted to whatever was popular at the time, something stated more or less explicitly in The Thamesmen's first big hit, "Gimme Some Money." Somehow this escaped me although I'd seen the movie a number of times before. Like they say, there's a fine line between stupid and...and clever.
posted by MoonOrb at 8:48 AM on March 27, 2016

In retrospect I'm not sure what they're supposed to be playing- they seem to be playing prog rock but there's all these references to heavy metal that suggests NWOBHM.
posted by Pope Guilty at 9:40 AM on March 27, 2016 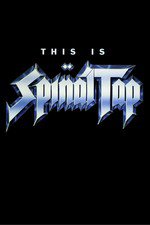