Aspiring comic Rupert Pupkin wants to achieve success in show biz by stalking his idol, a late night talk-show host who craves his own privacy.


NYTimes: It would be difficult to describe Martin Scorsese's fine new film, ''The King of Comedy,'' as an absolute joy. It's very funny, and it ends on a high note that was, for me, both a total surprise and completely satisfying. Yet it's also bristly, sometimes manic to the edge of lunacy and, along the way, terrifying. It's not an absolute joy by a long shot but, in the way of a film that uses all of its talents to their fullest, it's exhilarating.

Roger Ebert: "The King of Comedy" is not, you may already have guessed, a fun movie. It is also not a bad movie. It is frustrating to watch, unpleasant to remember, and, in its own way, quite effective. It represents an enormous departure for Scorsese, whose movies teemed with life until he filmed this emotional desert, and whose camera used to prowl restlessly until he nailed it down this time. Scorsese and De Niro are the most creative, productive director/actor team in the movies right now, and the fact that they feel the freedom to make such an odd, stimulating, unsatisfying movie is good news, I guess. But "The King of Comedy" is the kind of film that makes you want to go and see a Scorsese movie.

Looking back at Martin Scorsese's 'The King of Comedy'

'The King Of Comedy' forum: Is Rupert Pupkin funny? (and other questions)

Anatomy of an Actor: Robert De Niro Pushes Buttons on 'The King of Comedy'

Trailer
posted by MoonOrb (6 comments total) 2 users marked this as a favorite
A fascinating film, and everybody involved is at the top of their game.

Does anybody know why Scorsese and De Niro stopped working together? Have they ever talked about that publicly? They did such great stuff as a team, and I think their work has really suffered since they split. (Although Scorsese has still been pretty good, while De Niro has been in so, so many bad, embarrassing things. You see a movie like this, and it reminds you that De Niro used to be DE NIRO.)
posted by Ursula Hitler at 10:43 PM on March 23, 2016

These days, De Niro mostly seems to pick projects that must just sound fun to him to work on, that pay a bunch of money for minimal work, etc. And that may sound like a dig, but it's not. Acting is still a job, after all. If, late in my career, I am offered heaps of money to phone it in a few weeks at a time, I most likely will do that instead of continuing to seek out draining new challenges that maximize the utilization of my talents.

Masha, the character is an unhinged weirdo, but Sandra Bernhard is so great in the role, it's hard not to come out of the film with a real affection for and appreciation of her as an actress.
posted by DirtyOldTown at 6:48 AM on March 24, 2016 [2 favorites]

Scorsese made a short film last year with De Niro called The Audition. It was 15 minutes long, cost $75 million, costarred Leo DiCaprio, and doubled as a promotional film for a casino.
posted by maxsparber at 8:16 AM on March 24, 2016

I just watched this for the first time tonight, after hearing about it for years.
What an amazing thing I just watched.
posted by Mister Moofoo at 3:26 AM on March 25, 2016

A guy I know named Matt Mcirvin posted some thoughts after seeing the movie the first time in 2003. One thing he said was:

One of the things I liked most about the movie is that when we finally hear Pupkin's routine, it's pretty bad, but it's realistically bad: not completely over-the-top bad, but the kind of bad you'd hear from an actual really lame stand-up comic. Jokes about how crummy Passaic, New Jersey is. And he actually gets a few chuckles from dimwits in the audience.
posted by jwgh at 6:18 AM on March 25, 2016 [2 favorites]

Top-tier Scorsese. Anyone got the Blu-Ray?

Good insight from The Dissolve (R.I.P.) 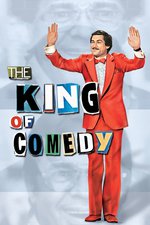