A voluptuous black woman takes a job as a high-class prostitute in order to get revenge on the mobsters who murdered her boyfriend.


The Dissolve: In Foxy Brown, the heroine’s boyfriend is exposed as an undercover government agent, and when the mob shoots him, Foxy gets a job at the syndicate’s most exclusive escort agency to take them down from the inside. The story takes a while to get ramped up, and the pacing’s a little slack, but there’s a good reason why Foxy Brown is generally (if wrongly) considered the 1970s Pam Grier film. Writer-director Jack Hill’s success as a drive-in movie-maker was largely due to how well he could work sex and violence into pictures without it coming across as overly sleazy. It’s not irrelevant to the popularity of Foxy Brown that Foxy dresses up as an expensive prostitute, seduces no-good louses, and then abuses and/or shoots them. But as handled by Hill, the sensationalistic elements seem both natural and marginal. Grier as Foxy would be fun to watch even if she kept her clothes on and her claws in.

Chicago Reader: She gamely bears the weight of this 1974 feature's ideological inconsistency, functioning simultaneously as heroine and victim, avenger and sex kitten, conscience of the community and law unto herself. The film is dated, but its mixed message—and its potential to offend virtually everyone—still makes it a powerful discussion starter.

Art of the Title: Foxy Brown

Theme of Foxy Brown
posted by MoonOrb (2 comments total) 1 user marked this as a favorite
I wrote about this quite a few years ago, and noted that she seems to take an awful lot of weapons out of her hair. There is a moment at the start of the film where she suddenly produced a shotgun, and I was of the opinion that the shotgun also came from her hair.

I got a comment on the post from someone saying it had a sawed off stock, and she had hidden it in her purse. I responded that that didn't seem likely, so I was sticking with my hair theory.

The guy wrote back "I am Jack Hill, and I directed the film. The shotgun was in her purse."

Met him a few years ago at a New Beverly in Hollywood where they were doing a retrospective of his films. Tremendously nice man. Still Facebook friends with him. He's pretty active there, chatting with friends.
posted by maxsparber at 8:50 AM on April 4, 2016 [6 favorites]

Love this movie, love Pam Grier. I feel to fully appreciate it you would need to watch Coffy and Black Dynamite. Foxy Brown is pretty much a sequel to Coffy and honestly not as good, and Black Dynamite pulls a few intentional gaffes straight from FB.
posted by P.o.B. at 2:39 AM on April 7, 2016 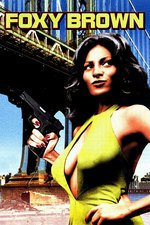