The Bandit is hired on to run a tractor trailer full of beer over county lines in hot pursuit by a pesky sheriff.

• The film was the second highest-grossing film of 1977, second only to Star Wars.

• Director Hal Needham originally planned the film as a low budget B movie with a production cost of $1 million, with Jerry Reed as the Bandit. It was not until Needham's friend Burt Reynolds read the script and said he would star and that the film was aimed at a more mainstream release, as Reed would now portray Bandit's friend Snowman (Reed would eventually play the Bandit in Smokey and the Bandit Part III).

• (at around 15 mins) The Bandit breaks the fourth wall and smiles at the camera.

• Jackie Gleason was given free rein to ad-lib dialogue and make suggestions. In particular, the scene where Sheriff Justice unknowingly encounters the Bandit in the "choke and puke" (a roadside diner) wasn't in the original story but rather as Gleason's idea.

• "Buford T. Justice" was the name of a real Florida Highway Patrolman known to Reynolds' father, who himself was once Police Chief of Riviera Beach, Florida. His father was also the inspiration for the word "sumbitch" used in the film, an apparent mispronunciation of the phrase "son-of-a-bitch" he reportedly uttered quite often, according to Reynolds.

• Reynolds and Sally Field began dating during the filming of Smokey and the Bandit.

• While made to take advantage of the ongoing 1970's CB radio fad, the film itself added to the craze.

• Though the 1975 film Moonrunners is the precursor to the 1979–85 TV series The Dukes of Hazzard, from the same creator and with many identical settings and concepts, the popularity of Smokey and the Bandit and similar films helped get the Dukes series on air. Three actors from the main cast of The Dukes of Hazzard appear in small uncredited roles in Smokey and the Bandit: Ben Jones, John Schneider, and Sonny Shroyer (who, incidentally, played a police officer in both). In return, Reynolds portrayed the Dukes character Boss Hogg (originally portrayed by Sorrell Booke) in the 2005 film adaptation, The Dukes of Hazzard. Reynolds is also referenced by name in several early episodes of the series.

• Needham saw an advertisement for the soon to be released 1977 Pontiac Trans Am and knew right away that would be the Bandit's car, or actually a character in the movie is how Needham referred to the Trans Am. Needham contacted Pontiac and an agreement was made that four 1977 Trans Ams and 2 Pontiac LeMans 4-door sedans would be provided for the movie.

• The film also made use of three Kenworth W900A short-frame semi trucks which Jerry Reed's character "Snowman" can be seen driving, each equipped with 38" sleepers. Two units were 1974 models as evidenced by standard silver Kenworth emblems on the truck grille, and one unit was a 1973 model as evidenced by the gold-painted Kenworth emblem on the truck's grille signifying Kenworth's 50 years in business.

• In 1977, Coors was unavailable for sale east of Oklahoma. A 1974 Time magazine article explains why Coors was so sought after that someone could be willing to pay the Bandit such a high price to transport it. Coors Banquet Beer enjoyed a brief renaissance as certain people sought it out for its lack of stabilizers and preservatives. The article explains that future Vice President Gerald Ford hid it in his luggage after a trip to Colorado in order to take it back to Washington. President Dwight D. Eisenhower had a steady supply airlifted to Washington by the Air Force. The lack of additives and preservatives meant that Coors had the potential for spoiling in a week if it was not kept cold throughout its transportation and storage at its destination. This explains the 28 hour deadline.

• Hal Needham asked Jerry Reed to write a theme song for the film. A couple of hours later, Reed presented "East Bound and Down" to Needham. With an acoustic guitar, Reed started to play it and Needham immediately stopped him. Thinking Needham didn't like it, Reed offered to re-write the song. To which Needham replied: "If you change one note, I'll kill you!" The song went on to become one of Reed's biggest hits.

• When Smokey and the Bandit first aired on American network television in the early 1980s, censors were faced with the challenge of toning down the raw language of the original film. For this purpose, they overdubbed dialogue deemed offensive, which was (and remains, to an extent) common practice. The most noted change made for network broadcast was the replacing of Buford's often-spoken phrase "sumbitch" (a contraction of "son of a bitch"; usually in reference to the Bandit) with the nonsense phrase "scum bum". This phrase achieved a level of popularity with children, and the 2007 Hot Wheels release of the 1970s Firebird Trans Am has "scum bum" emblazoned on its tail. The TV prints of the first two Bandit films are still shown regularly on television, although a few TV stations aired the unedited version in recent years as some of the phraseology (i.e. "(son of a) bitch", "ass", etc.) became more acceptable on TV.

• The original actors mostly redubbed their own lines for the television version except for Gleason. Actor Henry Corden, who voiced Fred Flintstone after original performer Alan Reed died, was used to replace a considerable amount of Sheriff Justice's dialogue. This is fitting, as Fred Flintstone was a parody/homage of Gleason's character Ralph Kramden and The Flintstones was a parody/homage of The Honeymooners.

Jerry Reed is the real hero of this film, and Eastbound and Down is one of the greatest movie theme songs ever written.
posted by maxsparber at 9:45 AM on April 22, 2016 [4 favorites]

I saw this movie in the theaters when I was about eight years old. I don't think I'd seen it since then. Along with The Bad News Bears in Breaking Training, it was probably one of the first PG movies I ever saw, and one of the first with swearing. When my son was eight, I figured it would be a fun movie for us to watch together.

When the first instance of the word "shit" was spoken, he turned to me and said "dad, he just said the 's' word!" after about the third time he said "I'm going to count how many times they say the 's' word."

He stopped counting at 35. I think we were maybe 20 minutes into the movie.

He loved it. It was a great film to watch together and shortly after we watched most of The Dukes of Hazzard series.

It was made in the 1970s, so everybody is smoking all the time. In fact Sally Fields' character starts smoking for the first time and continues throughout the film.

So many great lines and scenes:

"Get this piece of shit off of my highway."

To think that in 1977 America's beer situation was so dire that people would go to extraordinary lengths to get *Coors*.
posted by Chrysostom at 1:06 PM on April 22, 2016 [8 favorites]

The film was the second highest-grossing film of 1977, second only to Star Wars.

Now I'm imagining the parallel universe where there was no Star Wars, and William Friedkin keeps explaining why it's Smoky and the Bandit's fault that Sorcerer wasn't a huge success.
posted by happyroach at 1:46 PM on April 22, 2016 [3 favorites]

They are basically the same film. Just trade out nitroglycerine for Coors beer.
posted by maxsparber at 1:52 PM on April 22, 2016 [1 favorite]

I remember thinking from this that Coors was some magical elixir and when I finally drank one, it was such a letdown.
posted by octothorpe at 3:27 PM on April 22, 2016 [2 favorites]

To save you 30 seconds of Googling, ricochet biscuit did not make any of that up. What a strange world we live in.
posted by Literaryhero at 7:08 PM on April 22, 2016 [6 favorites]

This movie is practically part of my DNA. Jackie Gleason is as big a presence as Darth Vader. Sally Field is adorable. Jerry Reed is cool as shit and Burt Reynolds was never better.
posted by Atom Eyes at 12:22 AM on April 23, 2016 [1 favorite]

I watched these movies like crazy as a small child. I can't really define why.
This and Cannonball run.

Imagine my surprise when as an adult my other British friends didn't have detailed information on american cars and trucks from the late 70s.
posted by Just this guy, y'know at 7:06 AM on April 23, 2016

To save you 30 seconds of Googling, ricochet biscuit did not make any of that up. What a strange world we live in.

This was my brother Charlie's all time favourite movie. He was a trucker and a mechanic. I gave him the DVD one Christmas after he told me he very much wanted a copy but could never seem to find one in a store. He beamed when he opened it, and my oldest brother exclaimed, "That's the best movie ever made!" (Three of the four men in my immediate family have their A licenses.)

I have read that in Japan the Japanese title for Smokey and the Bandit is Cars Chasing Across the Country in a Disorderly Fashion.
posted by orange swan at 12:31 PM on April 23, 2016

This was my first date movie, a double date no less. I was 13. My buddy and I sat about five rows behind our dates and threw popcorn and Jujube at our dates. Good times, good times.
posted by kirkaracha at 8:04 PM on April 23, 2016 [2 favorites]

I love this movie and especially Gleason's role. Not sure how old I was but I watched for the first time when it was on TV back in the days when that was the only way to see movies outside of a theatre. I think it imprinted in some way because I just can't skip by it now if I'm channel surfing; a fascination my father never understood.

"What we're dealing with here is a complete lack of respect for the law. "

"Ooo, Hee-Hee. For some reason or another, you sounded a little taller on radio, hee-hee. "

I've never investigated but I really hope Gleason wasn't the racist he portrayed in this film.
posted by Mitheral at 2:57 PM on June 3, 2016

As a start to my personal tribute to the recent passing of Burt Reynolds, I just watched this movie through for the first time yesterday. Which is weird because, as a 51-year-old American male from a moderately-southern area of the United States, you'd think I'd have had much more exposure to it.

BAN-ONE: That car is a thing of beauty. I've always loved the 2nd generation F-bodies (my "won the lottery" dream car is a mid-70s Camaro. Fight me) and that car is a wonderful example of why.

Burt Reynolds: Adorable. Just adorable. For real, I totally want to pinch his cheeks ALL THE TIME.

Jackie Gleason: uhhhhh... so... I grew up on reruns of 50s sitcoms, so I've seen my fair share of The Honeymooners. I have *NEVER* seen Gleason chewing on the scenery as much as he does in this role. Dear gods, people. This was NOT a good appearance for him.

I really want to know how much Coors paid for product placement. I mean, in addition to the WHOLE STORYLINE, there are Coors t-shirts in a lot of scenes.

Gas was 47.9 cents/gallon. Living in the Bay Area where gas is currently around 8x that cost, I almost wept.

EVERYONE SMOKING. NO ONE WEARING SEAT BELTS. It was a dangerous time. 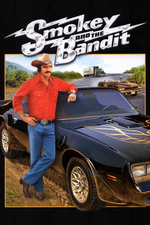