Romance and suspense ensue in Paris as a woman is pursued by several men who want a fortune her murdered husband had stolen. Who can she trust?


NYTimes: I tell you, this light-hearted picture is full of such gruesome violence.

That much explained, however, there's a lot to be said for it as a fast-moving, urbane entertainment in the comedy-mystery vein. Peter Stone, a new chap, has written a screenplay that is packed with sudden twists, shocking gags, eccentric arrangements and occasionally bright and brittle lines. And Stanley Donen has diligently directed in a style that is somewhere between that of the screwball comedy of the nineteen-thirties and that of Alfred Hitchcock on a "North by Northwest" course.

The players, too, have at it in a glib, polished, nonchalant way that clearly betrays their awareness of the film's howling implausibility. Miss Hepburn is cheerfully committed to a mood of how-nuts-can-you-be in an obviously comforting assortment of expensive Givenchy costumes, and Mr. Grant does everything from taking a shower without removing his suit to fighting with thugs, all with the blandness and the boredom of an old screwball commedy hand.

Slant: Whether it would be categorized as a thriller or a comedy, Charade is most certainly not a musical, but many of its scenes play out with stupendous rhythm, both visually and through performance. The introduction of Charles’s OSS partners-in-crime at the man’s funeral exudes an especially buoyant comic precision like that of a seasoned percussionist. The first partner, Gideon (Ned Glass), merely sneezes and the second, Tex (a young James Coburn), only goes as far as to hold a mirror up the corpse’s nose; the third man, Scobie (the great George Kennedy), finds it more suiting to check the deceased by sticking him with a pin. All of this is interjected by key reaction shots from Hepburn and the indelible image of a bored inspector (Jacques Marin) clipping his fingernails.

What ensues is a riotous and chaotic take on the spy thriller, essentially, but it structurally resembles Agatha Christie’s And Then There Was None. The trio of villains pressuring Regina for the location of the $250,000 would be enough for Ms. Christie, but Peter Stone’s wonderfully inventive screenplay supplies one more dilemma which reveals itself in the form of a mysterious stranger, originally going by the name of Peter Joshua, who is played by Cary Grant. Grant’s character, a figure whose job and intentions shift nearly on the hour, develops a romantic plot with Ms. Lampert, but also has an unknown stake in the $250,000, which may be as simple as thievery or as complex as international relations. Decked out in Givenchy wardrobes and given a deeper shade of humor by Henry Mancini’s playful score, the five figures run loops around each other and lie incessantly to unearth Charles’s hiding place, even as they attempt to appease or dodge America’s ambassador to France, played by Walter Matthau.

The Guardian: It is sad that Hepburn and Grant took so long to make a film together, and that they never made another. They would have made a good pairing for a remake of Hitchcock's Notorious, with Grant rumoured to have spied for the British in Hollywood, and with Hepburn genuinely having a father with fascist (indeed Nazi) connections. Yet at least we have Charade, a movie that unifies two highly compatible acting styles. On the one hand there is Grant's ironic presence, performing himself and somehow standing aloof from that performance. Then there is Hepburn's heartfelt earnestness combined with her genius as a comedian, present in her ability to transform in an instant seriousness into silliness. Donen's film manifests the same doubleness – it's a screwball suspense movie, a comedy laced with violence, channelling the droll anxieties of Hitchcock at his lightest. In its plots and counterplots, its version of an endlessly various Grant (his identity changes four times), Donen taps into the latent fear in Grant's urbane demeanour – the potential killer of Hitchcock's Suspicion lurks behind his persona's unruffled calm. As such, Charade plays on the spy film's interest in the notion of trust as the basis of love – in a world of espionage, of deceits and dishonour among thieves. With two actors whose whole image was nourished by the contrivance of an artful naturalness, the film wants to ask: how can we tell when someone is lying to us? How do we know who is merely an actor?

The Criterion Contraption: With Cary Grant and Audrey Hepburn on screen together, you don't really have to do too much to make a great movie, or at least a fun one. Donen has a serviceable plot, with more than the required number of turnarounds. Hepburn, unhappily married, returns home to find her husband was not the man he claimed to be. Furthermore, she discovers he has sold all her possessions and gotten himself killed while fleeing France by train. It seems that the couple's wealth (a) was stolen from the United States government as part of a World War II pact and (b) has disappeared completely. This puts Hepburn in kind of an awkward position, since the other people who helped her husband steal the money are convinced that she has it. Fortunately, Cary Grant shows up out of virtually nowhere to help her outwit her husband's former army buddies. And when it comes to outwitting, nobody was ever better than Grant. Although Hepburn hadn't played the kind of character she plays in this movie before, anyone who's seen Wait Until Dark knows she can do one hell of a resourceful-in-a-crisis damsel in distress. One can imagine making this movie and having both actors play against type. But I don't want to see that hypothetical movie as much as I want to see the two of them being funny and charming. Basically being, you know, Cary Grant and Audrey Hepburn. Charade is an ideal star vehicle for these two, drawing heavily from Hitchcock's movies (all the way back to The 39 Steps, as Charles Taylor has noted) for its particular mixture of genres.

Trailer
posted by MoonOrb (14 comments total) 10 users marked this as a favorite
I watched this movie many times growing up. Walter Matthau was also fantastic in one of his few "straight" acting roles. Even as a child, this movie totally entertained me. Now I'll have to go back and watch it again that I'm closer to Hepburn's age in the movie.
posted by miss-lapin at 9:01 PM on May 3, 2016

Popcorn Dialogues is a now-finished podcast that analyzed movies, so that's where I first heard of this one. It was a fun good time.
posted by jenfullmoon at 10:27 PM on May 3, 2016

Charade was one of my coming of age movies, in that it showed me movies didn't have to make it easy for you, and you had to work things out. Anybody may not be telling the truth, and nothing is as it it seems. It even took me to a point where I was almost expecting Audrey Hepburn to rip off her figurative mask at the end (like Clue).

I love this movie in the abstract. I mean the idea of a light spy (sort of) adventure with Cary Grant and Audrey Hepburn. I mean the brain just lights up. When I actually watch it - which I did not all that long ago with my wife who had never seen it - I find myself a little thrown out by just how often, and how rapidly, they whipsaw poor Audrey Hepburn back and forth from trusting Cary Grant as the one man who can help her to fearing him as a betrayer, and then back again, and again, and again.

It starts to strain credulity after a while - specifically the ability to suspend disbelief in the emotional truth of the characters. That's hard enough in any movie with a romantic subplot anyway, where we have to believe characters meeting and falling in love forever within two hours of screen time. And this endless seesawing back and forth just brings that out and spotlights it for us. I don't for a moment believe these are two people falling in love. I mean even if he's Cary Grant, how much of that can one woman take?

But they are at least funny and charming while playing their parts as lovers. And the main thriller story is very well done, and in its individual moments it's great stuff. It's genuinely funny (the funeral scene is a masterpiece) and the tense sequences (Grant and George Kennedy fighting on the roof, the climactic scene in the plaza and the theater) are really gripping even today.

My wife is obsessed with the elevator/staircase design in this movie, which she remembered watching as a kid but couldn't remember the name of it--until one day it popped up on our Netflix queue.

Mancini's soundtrack (Spotify link) is delightful and perfect for the film as well.
posted by thecaddy at 9:30 AM on May 4, 2016 [1 favorite]

I've read that Cary Grant eventually insisted on stopping making romantic comedies because the age difference with his leading ladies was too ridiculous; and indeed, Audrey Hepburn is 25 years younger than he is. They were 59 and 34 in Charade. (Grant was 51 when he made To Catch A Thief, Grace Kelly 26; Grant 54 and Sophia Loren 34 in Houseboat)

In this one, Grant supposedly insisted on some script changes because of that. The script repeatedly emphasizes that she's the one chasing him, and he initially rebuffs her advances with specific, if lighthearted, reference to the age difference between them.
posted by Naberius at 1:28 PM on May 4, 2016 [2 favorites]

And I think that's one of the reasons why this movie has aged well, and seems comparatively modern next to, say, 'That Touch Of Mink'.
posted by bq at 7:09 PM on May 4, 2016

Every time I think about this movie, I wonder who the poor soul is who ended up with the blame for getting the copyright notice wrong so that it immediately went into public domain in the US upon release. That had to be one awful meeting.
posted by jason_steakums at 8:00 PM on May 4, 2016

Mancini's soundtrack (Spotify link) is delightful and perfect for the film as well.

Yassss. That percussion intro is wonderful and timeless. But when the strings come in, you immediately get thrown back to the 60s.

This is my favorite movie, but I haven't watched it in years. May have to remedy that tonight.
posted by donajo at 1:24 PM on May 5, 2016

A terrific movie, with several excellent bad guys. I think this film was influential for Vince Gilligan, considering the who-is-my-husband-really theme that Breaking Bad had, Skyler's maiden name being Lambert, and Walt's match-flicking habit.
posted by heatvision at 5:00 AM on May 6, 2016 [2 favorites]

I agree with Naberius' comment above: Reggie's weakness is a weakness for the film -- she's too passive and helpless compared to the cool and capable women in Hitchcock films from this period -- but she's Audrey Hepburn and so we the audience are prepared to forgive a bit just for the privilege of watching her. It'd be nice if she showed at least a little initiative, though, instead of being bounced around the film like a pinball.
posted by Nerd of the North at 12:50 AM on May 8, 2016 [2 favorites] 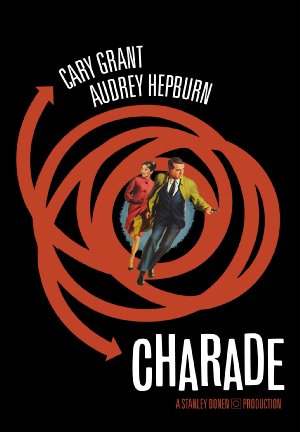