A fearless Secret Service agent will stop at nothing to bring down the counterfeiter who killed his partner.


To Live and Die in L.A. is a 1985 American action thriller film directed by William Friedkin and based on the novel by former U.S. Secret Service agent Gerald Petievich, who co-wrote the screenplay with Friedkin. The film features William Petersen, Willem Dafoe and John Pankow among others. Wang Chung composed and performed the original music soundtrack. The film tells the story of the lengths to which two Secret Service agents go to arrest a counterfeiter. (wikipedia)

• The basic plot, characters, and much of the dialogue of the film is drawn from Petievich's novel, but Friedkin added the opening terrorist sequence, the car chase, and clearer, earlier focus on the showdown between Chance and Masters.

• Friedkin had a $6 million budget to work with while the cast and crew worked for relatively low salaries.

• The director wanted to make an independent film and collaborate with people who could work fast, like cinematographer Robby Müller and his handpicked crew who were non-union members. Friedkin shot everything on location and worked quickly, often using the first take to give a sense of immediacy. He did not like to rehearse but would create situations where the actors thought they were rehearsing a scene when actually they were shooting a take. Friedkin did this just in case he got something he could use. To this end, he let scenes play out and allowed the actors to stay in character and improvise. For example, during the scene where Chance visits Ruthie at the bar where she works, Friedkin allowed Petersen and actress Darlanne Fleugel devise their own blocking and told Müller, "Just shoot them. Try and keep them in the frame. If they're not in the frame, they're not in the movie. That's their problem."

• The counterfeiting montage looks authentic because Friedkin consulted actual counterfeiters who had done time. The "consultant" actually did the scenes that do not show actor Willem Dafoe on camera to give this sequence more authenticity even though the actor learned how to print money.

• The wrong-way car chase on a Los Angeles freeway sequence was one of the last things shot in the film and it took six weeks to shoot. At this point, Friedkin was working with a very stripped down crew. He came up with the idea of staging the chase against the flow of traffic on February 25, 1963 when he was driving home from a wedding in Chicago. He fell asleep at the wheel and woke up in the wrong lane with oncoming traffic heading straight for him. He swerved back to his side of the road and for the next 20 years wondered how he was going to use it in a film. He told stunt coordinator Buddy Joe Hooker that if they could come up with a chase better than the one in The French Connection then it would be in the film. If not, he would not use it. Petersen did a lot of his own driving during this sequence and actor John Pankow's stressed out reactions were real.

• According to Friedkin, the main reason he chose Wang Chung to compose the soundtrack was because the band "stands out from the rest of contemporary music ... What they finally recorded has not only enhanced the film, it has given it a deeper, more powerful dimension".

We've run into some problems.... as far as broadcasting this feature. Watch this space for details.
posted by valkane at 6:21 PM on May 9, 2016

Had not seen this since the early 90s, so long ago in fact that I forgot about how everything in the final act went down, and it was just as jarring this time as it was the first.
posted by MoonOrb at 8:56 PM on May 9, 2016

This is definitely one of my favorite action films. I'm sure we can all name a lot of simplistic action films from the 80's in which the protagonist is some kind of cop, but does lots of morally questionable things, and you're supposed to just go with it because it feels better to see the bad guy get shot or whatever. This film stands in stark contrast to that model; you become suspicious of Chance and the risks he takes pretty quickly, and it gets worse and worse, until, like Vukovich, you realize that the risks are almost the whole point for him.

And I think that as your suspicion of Chance rises, so does your curiosity about Masters. How is this guy so smart? He makes Chance look uncool and sloppy, like a loose cannon, and it looks like he's having a pretty good time too. IIRC, the film shows that he isn't trying to hurt anyone; he only does when Chance's interventions put him in a corner. I can't say enough good things about Dafoe--this was early in his film career, but it's easy to see that he already knows how to make simple scenes more interesting, and he has such presence.

Obviously, there are some amazing chases, and I can't think of one in any film that I like better than the big one in this movie. I love it that they have that scene be the moment when Vukovich's suspicions about Chance crystallize, so it's climactic narratively and thematically. All the action scenes in this film are excellent though. They're very tense, yet the filmmakers gave them all just enough room, so that they feel realistic, and you have time to wonder and hope and dread.

This movie has an excellent theme song too. It took me some time to realize that the lyrics make perfect sense if you imagine them written by Ruth.
posted by heatvision at 4:39 AM on May 10, 2016 [4 favorites]

I saw this movie at an impressionable age, and John Pankow's dismayed yelps from the back seat of the chase scene summed up my experience.

In retrospect I think it defines the movie as well. I've seen a lot of noirs and neo-noirs since then. Many of them present a world that is both ugly and stylish at the same time, but for so many of them the style is the product. They want to captivate you with the beauty of their ugly reality. They want you to like the main characters because of their coolness. To Live and Die doesn't do that, really. It gives you the beauty and the action but I think it never wants to to forget the ugliness to it all, the ugliness of everything, and it can be pretty unsettling.
posted by nom de poop at 4:54 PM on May 10, 2016 [1 favorite]

Weird--I saw this back in the day, but always thought that it was a Michael Mann film (obviously without checking IMDB) because of Petersen starring (as he did in Manhunter) and also because of the 80s stars on the soundtrack.
posted by Halloween Jack at 7:02 AM on May 11, 2016

The one thing I've always wondered about this movie is why the location titles are all a different font.
posted by ob1quixote at 9:23 PM on May 12, 2016

I watched this after reading about it on Mefi. I had heard of it before but forgotten about it, and then that thread made me watch this and all of Miami Vice (which I thought was great to be honest.)

This is fantastic movie, how they get into a mess and don't realise how much of a mess they are in, and it just gets worse and worse for them. I'm sure he says something like: "Who are all these guys with guns and why are they shooting at us." at one point, and it is clear they are so far up shit creek it is unreal.

It is beautiful to look at, grim and dark and, as commented in the Mefi thread, has that 70s paranoia movie vibe to it, although I didn't get the impression it had a total 80s gloss, it still had that rough feel to it. Some things were slick - the counterfeiting scenes look cool and a tad 80s, but overall the movie can hold its own against anything put out since. Gotta agree with another of the comments in the Mefit thread: the direction is amazing - allied with the great performances, it really sucks you into their world, and you feel as if you are almost part of the conspiracy just by watching it.
posted by marienbad at 5:07 AM on May 15, 2016 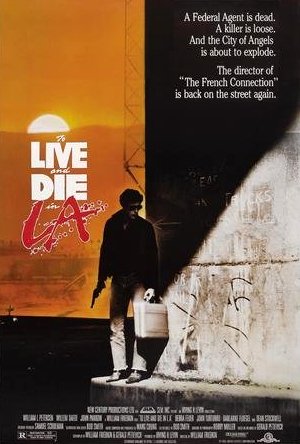