Frankie and Brianna negotiate the sale of the yam lube. Robert and Sol argue about how gay they're going to be. Mallory goes on bed rest (already?!) and Grace feels jealous of how Grandma Jean is "the fun grandma" compared to her.


After attempting to balance her checkbook, Frankie demands nine million dollars when Brianna says she's interested in buying the yam lube for the Say Grace company. Brianna's response is "So do I!" Frankie talks with Grace about how to aim for what she wants and brings Bud in as her lawyer. Brianna's assistant has a delightful time writing down everything in the meeting, such as Brianna's childhood nickname and her tells when she lies.

"I want nine million dollars." -Frankie
"Fuck my life, fuck it hard." -Brianna
"I am so glad I came to work today." --Brianna's assistant.

Mallory's on bed rest (seriously? the woman's barely showing!) and Grandma Jean (Mitch's mom) immediately flew in to help, announcing that "My houseplants are plastic and my husband's dead." It's gently pointed out to Grace that she's not super down with the way kids play, and she tries to but only freaks out the kids when she pretends to be a clown. Also, "Who wants to read the Velveteen Rabbit?" "Nobody!" Also, everyone gets lice. Frankie talks about how hamsters eat their grandchildren--after Grace says they don't live long enough for that, Frankie is all, "Don't confuse me with the facts, I'm going somewhere with this." Her advice is, "be the bossy hamster with the drinking problem. They're the ones who inspire their grandchildren to become writers."

Sol gets jealous of Robert's flirting with a gay orderly who invites them to Drag Queen Bingo. However, they make up and Sol arranges to have Ana Phylactic-Shock come and play the game with everyone in the hospital.

Frankie is going to have her art on the yam lube--of course it'll be a painting of her vagina--and she has some name ideas: Vadgeicadabra, Slip Inside, Lubricam, Yam Bam Thank You Ma'am.
posted by jenfullmoon
« Previous Episode  |   Next Episode »
« Older Grace and Frankie: The Vitamix...   |  Grace and Frankie: The Road Tr... Newer » 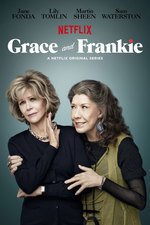