Has it only been three weeks since Payback? I guess so. Since then, we've seen the breakup of C-list faction the League of Nations, a battle royal to determine the #1 contender for the C-list US title, the annual round of C-list firings, and no movement whatsoever on the main storylines (okay, except for the advent of the NewDayLorean). You have to give credit to them for ending the go-home with a women's feud, at least.


So now we go into the C-list Extreme Rules PPV:

Roman Reigns (c) vs. AJ Styles in an Extreme Rules match for the World Heavyweight Championship: There's no way the Roman Empire ends, or even hiccups, this early, right? Maybe Gallows and Anderson will have something to say about it, but probably not enough.

The New Day (c) vs. the Vaudevillains for the Tag Team Championship: The 'villains aren't getting over hard, but putting the straps on them might help.

The Miz (c) vs. Cesaro vs. Kevin Owens vs. Sami Zayn for the Intercontinental Championship: Violence ahoy, with virtually any result probably being satisfying. The Miz is doing great work again, Cesaro seems to be getting over, and the latest chapter of the Owens-Zayn saga is as compelling as ever.

Kalisto (c) vs. Rusev for the United States Championship: So, did the League actually break up? They haven't fought each other at all, and Del Rio and Sheamus have been as involved in this feud as Kalisto's tag team partner, and none of them seems to be booked on the card at all yet.

Dean Ambrose vs. Chris Jericho in an Asylum match: It's a cage match with paraphernalia hanging at the top of the cage, including a straitjacket, a fire extinguisher, and a mop. Maybe this time, Ambrose will be allowed to use some of the stuff.
posted by Etrigan (12 comments total)
Oh, ick:
posted by Etrigan at 10:40 AM on May 17, 2016

I really haven't been following the product lately except to watch the (better-than-usual) actual wrestling matches. Why do Vince et al continue to be terrible people? Why do I ever expect better?
posted by uncleozzy at 11:55 AM on May 17, 2016

wow, the Del Rio/HHH/Paige/Charlotte drama is awful, and if built into a story will be super awful.

So, we have the World Heavyweight match which is Extreme Rules which is awesomely undefined but completely copyrightable, and the Asylum match which became such on the go-home...I swear to god I wish they would do away with every PPV that has a stipulation in the name (aside from Royal Rumble and Survivor Series, which I feel like are ok anchors on the year and easy enough to stick to). I wonder how many people inside WWE are already pitching the idea that the main roster PPVs move to an NXT style naming where we call them all "WWE Network Special -- [CityName]" minus the big 4 which can keep their names. Then the stipulation matches can get sprinkled throughout the year where they make sense, rather than the current mess that feels forced.

I think it's pretty cool they gave the women top billing on the go home Raw. In my dreams they could realize how little they want Extreme Rules to go off the air to sound of fans booing Reigns and they could give the women the main event at the PPV as well.

The Shining Stars didn't get much reaction and hopefully aren't DOA, they looked pretty good to me in the ring. I understand giving them a squash match against local talent to show off their moves, hopefully next match will be something with a team the crowd cares more about so that maybe the crowd will get invested in the match and care more about the Stars by proxy.
posted by jermsplan at 9:11 AM on May 19, 2016

.I swear to god I wish they would do away with every PPV that has a stipulation in the name (aside from Royal Rumble and Survivor Series, which I feel like are ok anchors on the year and easy enough to stick to).

And they've shown that they're willing to throw out the multi-elimination matches at Survivor Series -- they've had seven total in the last five years, and only one of those was the main event.

I would also leave Money in the Bank (that doesn't screw things up too badly in early summer as a lower peak between WrestleMania and SummerSlam) and Night of Champions (but I would move it to maybe December as sort of an annual palate cleanser before the start of WrestleMania season at the Rumble, or to February to really shake things up between the Rumble and the Mania).
posted by Etrigan at 11:29 AM on May 19, 2016

Chad Dukes Wrestling Show podcast interviewed Al Snow this week, and Al really impressed me with his insight into the current state of the industry as well as his perspective on fame and his own career. I'd never heard him outside of a ring, so maybe this isn't news to anyone else, but he blew me away.

(In case you listened to Chad Dukes after I mentioned it a while ago and rejected it for understandable reasons, he makes the interview segment available as a standalone podcast so you can listen to the 23 minutes of Al Snow without the rest of the hour if you want)
posted by jermsplan at 9:04 AM on May 20, 2016

Well, I was kinda surprised that only one belt changed hands, and Dana Brooke kind of came out of nowhere, but otherwise, nothing much happened here.

Oh, except that ending it with Seth standing tall over Roman was absolutely worth it.
posted by Etrigan at 7:59 AM on May 23, 2016

I don't know how I feel about the brand split. I already watch too much wrestling (PPVs, RAW, and Lucha Underground consistently, rarely Smackdown or NXT) and I don't want to have to watch Smackdown to see some of my favorite wrestlers.
posted by misskaz at 2:17 PM on May 25, 2016

Going back to Extreme Rules, my only thoughts were that the matches all seemed good if a little long. Maybe it was that I felt like I'd seen all of them so many times that I didn't need a long drawn out version of the short ones I'd seen for a month. Was also surprised the only belt that moved was the US Title, but maybe that's because Cena is about to make his triumphant return and they didn't want him to kick the crap out of Kalisto in order to reinstitute the US Title Open Challenge?

On RAW, holy cow did Rollins put on a clinic for how to come back to a huge pop and twist it into seriously great heel heat. I was a little bitter with the crowd for not playing along with Charlotte's segment, because that was scripted to be one hell of a heel move and the whole thing ended up being long and without the reaction it probably deserved. I'm amused that Samy and Owens are apparently going to continue their feud forever as part of a larger match, with neither of them ever winning whatever it is in the name of beating up on the other. I wonder how many 3+ person matches the WWE can figure out a way to string them along in.

And regarding the brand split, I don't know, I'm kind of with misskaz. I actually watch Smackdown fairly reliably, but I'm still not sold on the idea that the writers know how to put on compelling stories without a belt in the picture. I feel like if superstars are stuck on one show or the other then we'll need lots of personal fights with no belt on the line which would require us to be invested in compelling characters like, I don't know, #BNB, Stardust, Sandow...
posted by jermsplan at 10:22 AM on May 26, 2016

A bit late, but the opening kick for the fatal Fourway made me so happy, especially the sort of nonchalant reaction to it by Miz and Cesaro. I liked that there were no real team ups, only people taking advantage of situations (the Owens dive onto Miz strung between the ropes on one side and certain swing on the other side for one example). That match deserves enshrinement and to serve as a roadmap for how to do a proper fatal Fourway. The most positive relationship in the match was grudging respect between Zayn and Cesaro, and it was all downhill from there.
posted by Ghidorah at 11:57 PM on May 26, 2016 [2 favorites]

Has there ever been as much on-air concern-trolling for the breakup of any pairing of wrestler/manager/tag partner/family member as there has been in just the last two weeks for the Charlotte-Ric breakup?
posted by Etrigan at 6:51 AM on May 31, 2016 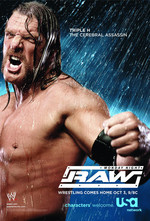