A police detective, a bank robber, and a high-power broker enter high-stakes negotiations after the criminal's brilliant heist spirals into a hostage situation.


NY Times: Here's how it goes down: Mr. [Clive] Owen stares into the camera and announces that he is about to commit "the perfect bank robbery." Whether his character, Dalton Russell, succeeds is immaterial to how he gets from the first act to the third, which is where Mr. [Spike] Lee's movie love comes in. This is the least overtly personal of Mr. Lee's films, but it's also his most polished and satisfying work in years, with none of the raggedness that sometimes mars even his best intentions. Taking his cue from the surprising, witty screenplay by the newcomer Russell Gewirtz, the filmmaker frames the heist and subsequent standoff as a really big show — namedropping "Dog Day Afternoon" along the way — then cuts his actors loose and lets them play.

As the action pings between Russell working his wicked ways inside the bank (beating hostages, forcing them to wear unflattering coveralls); Mr. [Denzel] Washington's smooth operator, a veteran detective named Keith Frazier; and Ms. [Jodie] Foster's Madeline White, a fixer hired by the bank, you might find yourself trying to unknot the increasingly tangled plot. Don't bother.

Roger Ebert: To give the movie its due, many of these same questions occur to the hero, Det. Keith Frazier. He is played by Denzel Washington as a cross between a street cop and one of those armchair sleuths who sees through a crime and patiently explains it to his inferiors. Frazier is early on the scene after four armed robbers invade a Wall Street bank, take hostages, and start issuing demands. As the crisis drags on, Frazier realizes the guys inside don't want their demands to be met; they're stalling. But why?

The robbers are led by Clive Owen, who spends most of the movie wearing a mask. Since we see him in the first shot of the film, talking about the crime in the past tense, we know he won't be killed. What we wonder is where he studied the craft of bank robbery. His gang walks in, bolts the door, has everyone lie flat on the floor, and does all the usual stuff like leaping over teller partitions and intimidating weeping customers. They also throw around completely unnecessary smoke bombs, and the smoke drifts out to the street, alerting a beat cop that something is wrong. Did they want to be trapped inside the bank?

Variety: Still, [director Spike] Lee insures the substance of the film consists as much in its texture and details as its plot. It may seem like a predictable cliche, especially to the director’s detractors, that he so intently underlines the ethnicity of even the most minor characters; much is made of the rainbow brigade that constitutes the hostage group: the white woman who talks loudly on her cell phone; the young Sikh hostage who, when released, strenuously complains of being mistaken for an Arab; the glam Albanian sexpot who knows how to play her cards, and the young black hostage whose ultraviolent “Kill Dat Nigga” computer game gives pause even to Russell.

Lee makes a point of showing New York and, by extension, American society top to bottom, from politicos and power players in their extravagantly appointed lairs to drug-addled deadbeats like the teen brother of Frazier’s girlfriend. Mostly, of course, there are the working stiffs in the middle, including most of the hostages and the cops, who just try to get through each day.

“Dog Day Afternoon” serves as an acknowledged template here, but aside from the central bank hostage situation driven by unconventional reasons, the differences are more marked than the similarities; Sidney Lumet’s film was notable for grand theatrics and the spectacle of the media/law enforcement frenzy, two aspects “Inside Man” shies away from.

With Matthew Libatique behind the camera for his second consecutive picture with Lee, rough-and-ready visuals are of a piece with those of the helmer’s previous pics. Terence Blanchard’s score tends to the grandiose, although some Bollywood rap interludes are quite catchy.

Screenplay (PDF)
posted by infinitewindow (16 comments total) 3 users marked this as a favorite
I saw this in the theater and enjoyed it greatly, and so I had a great time recently watching it on streaming where I had the opportunity to track who was who knowing the end of the movie.

I picture Jodie Foster's character as sort of the NYC rich folks equivalent of "Mr Wolf" from Pulp Fiction. So fun to watch her play such a cast-iron badass.

Jodie Foster is great in this. Her character is totally unflappable.
posted by Monochrome at 11:42 AM on June 5, 2016

All I can remember about this is that my first feeling after seeing it was that it was an overcomplicated plan for the sake of a twist. I'll watch it tonight and see if I still feel that way.
posted by ODiV at 11:49 AM on June 5, 2016

This seemed like it was missing some context, like it was a really great episode of a long running series where all the other episodes had been lost but all the characters had backstory related to the others.

Does Jodie Foster's character actually *do* anything in the movie? Maybe that's a sign of how good her performance is: you don't notice that she's completely superfluous.
posted by asterix at 1:51 PM on June 5, 2016

Ms. White does inadvertently prod the mayor into giving Frazier the freedome to keep working on the case after it's quashed (via the recording pen). She also gets to call Case a monster, but I like the way Frazier did it better.
posted by infinitewindow at 3:44 PM on June 5, 2016

I found this movie deeply pleasurable. Everyone is great in it. The actors have lovely frisson with each other. You sympathize all over the place and enjoy the scam almost as much as the scammer. Yeah for the Heist Movie!
posted by latkes at 8:09 PM on June 6, 2016

Ms. White is necessary to keep the movie from Godwinning itself. Denzel's detective character is straight-laced, impervious to blackmail even. The criminals wouldn't hurt a fly. White keeps this movie from being merely very good people against an actual Nazi. White tells us that, yes, Case is literally Hitler (not literally), but big corporations are just as corrupt. She also demonstrates how corrupt the good guys of law and order are. The scenes with Jodie Foster make it clear that simply opposing Nazis isn't sufficient to qualify as the hero. Separate from this, but adding to my appreciation for the character, is the fact that White is the most fleshed out woman in the film. If you cut her character, what women are left? Just ones with a handful of lines, and most of them play to stereotypes.
posted by Monochrome at 10:08 PM on June 7, 2016 [1 favorite]

I think the reason Foster's character doesn't seem to actually do anything is because that is how the best Fixers operate. They can't officially be part of he story, so they hang around and wait for the right moment to whisper in someone's ear, or otherwise put their finger on the scales in such away that the issue veers toward a resolution seemingly under its own steam.
posted by dry white toast at 5:54 AM on June 9, 2016

I love this movie and almost everything Jodie Foster has ever done, but I really feel like she could be removed from this film with no effect except to make the story slightly tighter.
posted by ricochet biscuit at 2:43 PM on June 9, 2016

I'm with sammyo, I'm gonna have to watch this again. I feel like I saw everything but still I don't feel like I know how it all fits together. The second act felt like a fermata.

I saw this when it came out and it is a delicious movie. Ms. White is a great character but Frazier was the hero, hands down, no question. And the very last scene, I realized as I was watching it, is something rarely shown in 'movies' two people who aren't white having a nice, hot, loving intimate moment with each other. It struck me, and has stuck with me almost as much as the rest of the film.
posted by From Bklyn at 11:20 PM on June 17, 2016

I don’t want to see a movie with White as the main character, but I want to see more movies with her in the peripheries doing her thing.

What a fun movie! It was great watching Spike Lee do his thing but for a classic genre movie that's more about fun than a Deep Commentary on race in America. Not to say there wasn't a lot of that going on too. I also liked the thing Sammyo first highlighted here, that this movie felt like it took place in some much larger context, characters with bigger story arcs outside the movie. That's good writing.

The thing I didn't understand was the final climax scene, when NYPD decides they're going to go in, the robbers hear that's about to happen, so they trigger their plan to rush out and cause enough confusion to give cover to Dalton to hide inside the bank. The plan made sense, but not the timing. I guess the gang has been stalling all along trying to get the hidey-hole built, OK. So how come it was ready right at the moment it needed to be, when NYPD is going to storm them? Sheer luck? Also confused about the point of the whole Twist about how the robbers did have an Inside Man, the bug in the police mobile HQ. It all felt kind of superfluous, like three separate cool plot ideas that didn't quite come together.

The inside man is a reference to Dalton being a man inside the bank at the end of the heist isn't it?

It got to the point where there didn't seem to be any kind of informant or anything and I was kind of wondering at the title, then I realised what the plan was going to be.
posted by Just this guy, y'know at 2:35 PM on December 4, 2018 [1 favorite]

I rewatched this tonight, and thought it held up nicely. Not a knockout, but a strong genre film with some style, good performances, solid script. A couple of plot holes with the crooks plan clearly done for cinematic benefit, of course. One is a bunch of them going to pick up Clive Owen when he walks out all in the same clown car; a ridiculous unnecessary risk but it lets us see some of who is in on the robbery.

The second one concerns the hole that they dug, apparently for Owen to use as a toilet during his confinement. It's a useful cinematic misdirect; wondering if the heist involves tunnelling or something, at one point one of the Steves calls it a magnificent shithole which is a clever foreshadow. The problem is that it's clear they spend a fair bit of their limited time on digging this hole; the crooks even mention that Owen will smell like shit after a week in the cell with it. You know what is also a) a useful temporary emergency toilet that doesn't take hours and a bunch of tools, b) something that has a lid so it won't smell and possibly give the game away and c) incredibly common and unsuspicious for painters to carry around? A 5 gallon bucket.
posted by Superilla at 10:09 PM on November 11, 2020 [2 favorites] 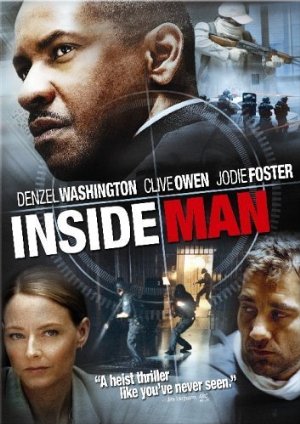