Two gay men in a small Texan town, each already dealing with aftermath of two different past relationships, try to figure out how to move on with their lives individually, occasionally passing each other at the same gas station.


Pit Stop premiered at the 2013 Sundance Film Festival. Directed by Yen Tan and written by Tan and David Lowery, it stars Bill Heck and Marcus DeAnda as Gabe and Ernesto.

Rotten Tomatoes
posted by MCMikeNamara (2 comments total) 3 users marked this as a favorite
Thanks for making this a FanFare thing and getting this movie off my "to watch someday when I'm in the right mood" list and onto my "watched" list. I liked many things about its evocation of the characters' histories and lives; I liked that people could go on bad or only-OK dates without anybody being a jerk necessarily. Not quite sure what I think of the ending; I tend to want things more neatly tied up than the movie allowed for, but I liked their hook-up and each of them spending time in wistful longing for more. It was an interesting choice that we learn so much about them separately but they only meet each other in the movie's last possible moment. We know so much about each of them as individuals by then. It's a change from the usual structure where we meet them as they meet, more or less, and get to know them as they get to know each other.

I happened to watch this on Netflix (land of the plentiful but questionable-quality indie gay dramas) about a year ago and was pleasantly surprised by how quietly evocative it was. Like not that girl, I was impressed by the presentation of the small town not as a house of horrors, but as a realistic place where people find acceptance where they can and sometimes have to live with and navigate complicated relationships with their loved ones.

In a sense, it's sort of the rural gay counterpart to Next Stop Wonderland - they're not destined to meet, exactly, but they do find each other at the right time.
posted by psoas at 10:30 AM on June 13, 2016 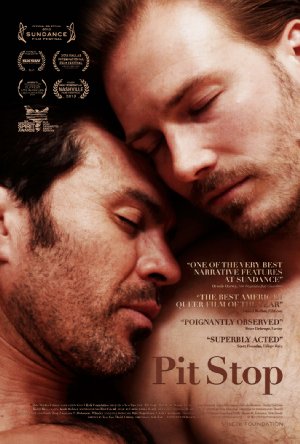