Part One of the two part second season finale of Defiance opens with Stahma and Datak kidnapped and left to awake chained together in the bottom of an abandoned silo. Good Tommy, still suffering from the stab wound he received from Irisa at the end of the last episode, is relentlessly pulled through the snowy woods surrounding Defiance by Nolan, determined to get him the medical help he needs. Throughout the night, flashbacks of Tommy are peppered throughout the episode, queued by his visions of friends standing in the silence of the snow filled woods. Meanwhile, Irisa takes control of Votan terraforming satellites hovering in the debris field above Earth and annihilates New York City. Lastly, Mayor Pottinger offers Amanda a surprise gift with unexpected results.
posted by Atreides (3 comments total)
Because what woman can resist the gift of vengeance?

Even as someone who's ended up staying with my share of batshit insane people for far longer than was safe or healthy, I still find it really hard to believe that Amanda can't see how batshit insane Pottinger is. I was hoping his confession to her while they were trapped together would be the turning point, but... we still don't even know what he said, or if he said anything, and whatever it was clearly didn't turn her away. Augh.
posted by rhiannonstone at 3:05 PM on September 4, 2014

Geez, I had a busy ten days or so. The episode isn't nearly as fresh as I would like it to be in my mind now.

It really was too bad for Tommy that the show opted to basically remember what a great character he was until the penultimate episode in which they kill him off. I suppose as send offs go, it was a little okay, but overall a shame. I like the actor and wish the writers could have found a better way to present Tommy's antagonism toward's Nolan and still offer up a Tommy that didn't seem to be angry about receiving a parking ticket every five minutes. To a degree, the real winner in it all was Nolan. He got to suffer pulling Tommy through the woods and live on knowing that he had patched things up with him before he died. Perhaps he'd be haunted that he let him die, but while losing friends would likely remain with him, it's not going lead him to pulling an Amanda in the next few episodes of Season 3.

I really liked the scenes of Datak and Stahma chained together, kind of a hard core couples therapy session. For all the terrible things they have done to each other, they love each other strongly. I hope that they have emerged from this with a much stronger and better relationship. I don't think it was a terrible move to poison the last three guys of the crew, as I have the feeling that replacements won't be that hard to find. The creepy, cruel element of it all was burying them alive at the end. Harsh!

Pottinger's gift to Amanda. Seriously, this guy has some messed up ideas of how to help people get over their problems. Likewise, I wonder if Pottinger appeals to Amanda's caring, need to fix/help side of things, but yes, she should at least admit he's FREAKIN' disturbed.

Irisa and the terra forming of NYC. As a human, I had to feel some pain for it. It's one of our last vestiges as a species! I had assumed that this season would end with the Earth Republic pulling out of Defiance and the Votan Collective coming in. This episode definitely did not set up the finale for that conclusion. 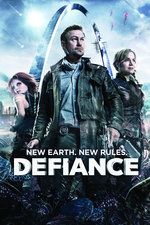