Journalist David Farrier stumbles upon a mysterious tickling competition online. As he delves deeper he comes up against fierce resistance, but that doesnt stop him getting to the bottom of a story stranger than fiction.


AND IT GETS WEIRD
posted by psoas (10 comments total) 3 users marked this as a favorite
The filmmakers have a Facebook page.....a key subject showed up the night of the opening.
posted by brujita at 9:38 PM on June 27, 2016

a key subject showed up the night of the opening

Two of the film's interview subjects showed up, claiming that the filmmakers used off-the-record portions of their interviews in the film without permission. If true, that would be rather sad given that the film is about a wealthy bully blackmailing the ticklees.
posted by mediareport at 2:32 AM on June 30, 2016

The positive Variety review includes a good summary. I'm torn about this one, because I wonder how much it crosses the line into exploitation of subjects who have apparently already been exploited badly, including life-ruining lies and threats to keep them in line.

psoas, what did you think about that element? Did they handle it well?
posted by mediareport at 2:37 AM on June 30, 2016

I'd say the Variety review gives far too much away, since much of what I found thrilling about watching it was not knowing which way it was going to turn.

That's great to hear, psoas, thanks for the specifics. Looking forward to seeing it when it hits the sticks.
posted by mediareport at 6:20 PM on June 30, 2016

I'm trying to figure out if this D'Amato guys fetish is actually tickling, or threatening and controlling people. I think it's the latter. I mean, if you've got a tickling fetish, and the money to finance films of it, so what? Nobody cares! As fetishes go, that's pretty damn innocuous. But it seems like he puts more effort into the creation of online personas to generate threats and intimidation. Like maybe the tickling videos are just the means to find marks he can blackmail and threaten.

I'm frankly shocked D'Amato actually showed up at the premiere, as seen in the Facebook videos. His remarks there, though, seem like just the same broad threats of lawsuits, but I don't see how he's got a leg to stand on.

If you want to go a little more down the rabbit hole, check out tickledmovie dot info. I'm not linking on purpose, just in case. This is the Kevin guy who shows up at the airport in the movie, who seems to be doing the actual tickle filming now, and who also showed up at the premiere. His big beef now seems to be that video and audio of him is included in the film without his consent, which he tries to equate to the misuse of the videos of the guys in the tickling films. He also complains that the film equates his videos to porn - which, dude, denial isn't just a river in Egypt, you're making fetish porn, whether or not there are any genitals in it. That's the nature of fetishes - they're still fetishes even if they don't involve sex in the usual genital/penetrative methods. Oh, and he also rants that his assistant, who was with them in the New Zealand airport scene, is gay but not out to some of his family, and the mere appearance of his face in this documentary somehow outs him? Except that guy is never spoken to, and no assumptions or inferences regarding his sexuality are ever made in the film - so basically, it's Kevin who just outed the assistant, not the movie.

Will be interesting to see if this has any effect - like, if word gets around about this sociopath enough that he can't find victims for his scam anymore. Unfortunately I doubt it. Unless maybe the assorted harassment victims could band together to win a lawsuit that would drain that $5 million checking account.
posted by dnash at 6:42 PM on July 10, 2016

I'm trying to figure out if this D'Amato guys fetish is actually tickling, or threatening and controlling people. I think it's the latter.

My husband agrees with you. I think it's a bit of both and this is highlighted by the section with the guy who makes the legitimate, consensual paid tickle fetish movies. He's comfortable and out about his fetish and is not exploiting the people in his movies. By contrast, D'Amato comes across as having some issues around sexuality (not entirely clear, but hinted at by his step-mother). My take is that there is a tickling fetish there and it happens to be an outlet for the power and control stuff he really gets off on.

We saw this yesterday at a sold out session at the Melbourne International Film Festival. The directors did a Q&A at the end which was awesome and they talked about the various instances where their subjects turned up at screenings. Apparently there are videos of those interactions on their facebook page.

I just watched it, and I'm kind of aggog. This is pure bonkers.

It's clearly the sort of case where the law hasn't caught up to the internet. What this guy did to so many young men (and boys!) without repercussions is horrible.
posted by meese at 10:32 PM on March 23, 2017 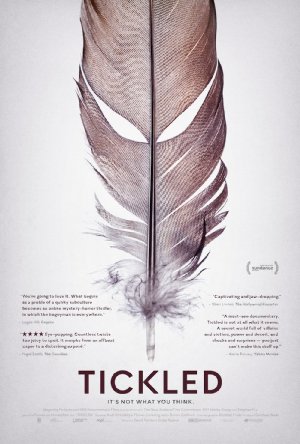