This is the boringest episode of Empire ever. There's a pregnancy announcement, more fighting over who gets to be the CEO, and someone's not dead and eh....I'm not so much with the caring.


Okay, my move is mostly over (sigh), so here I am trying to go back to recapping.

Team Lola: Lola who? Thirsty got a DNA test done and now she's no Lyon. Retcon! So much for her being any kind of heir, not that she ever was.

Team Leah: Who's Leah? Lucious's dead mom, who despite supposedly killing herself in front of him is now in a rest home in Pennsylvania and Thirsty knows about it. Again, another bad retcon.

Moving on from what Thirsty's up to...

Team Lucious: Lucious spends the entire episode scheming to get back on the board. Oh, he'll think about it if people want him back..if he's called to serve, he'll do it. How very 19th century politician of you, Lucious.

Team Rhondre: Andre's going around making amends, both he and his wife find out Anika's pregnant and by who, and they help her break the news to the family. Lucious takes him to visit his grandma's grave as a method of getting Andre on his side again. Oh yeah, and I guess Andre blabbed some Empire business stuff to Lucious that I don't think he should have.

Team Anika: After Anika announces (and Cookie righteously slaps Hakeem over the head about not using a condom), she says she wants the baby to have a family. Seriously, you want THIS one?! Lucious of course has to come over and be creepy and bring a stuffed lion and offer Anika 10 mil for the baby. Anika threatens to go to the FBI (after five years of dating, you gotta learn some things), they both bitch each other out for cheating, etc. Lucious leaves while commenting that a lot of women don't survive childbirth, which does not surprise me one bit. Girl is probably dead the second she gives birth at this point.

Team Hakeem: It's not Hakeem's week, as Lucious befouls his board meeting by (a) stealing the clothing line, (b) planting drugs on roadies so Hakeem's fiancee can't perform, (c) interrupting the Q&A to bring up stuff like "where's that Swiftstream app" and "what ever happened to that canceled tour" and "where's that clothing line?" Cookie does her best to be all, "Hey, isn't it great that these two guys care so much about Empire?" and somehow after the commercial break...uh, Hakeem's out and guess who's in.

Team Cookie: Why is Cookie dressed like a sexy schoolmarm in a bun and tight suits the entire episode? Anyway, in addition to the board meeting, she's trying to get Freda away from Jamal by setting him up with "Stacee Run-Run" on the album, except Stacee wants an exclusivity clause and bye-bye Freda. Freda actually takes that news pretty politely, btw. Go figure.

Team Jamal: Jamal goes for this Stacee at first, but is disappointed when Stacee jets off to Japan and just leaves him with a track to perform against. This harshes his mellow and he goes after Freda (who wears a pink smock and works in a barbershop?!) to apologize.

Like I said, boring. Though I kept thinking the "Dwight Walker video" they kept referring to was "White Walker video." Har.

One thing for Quote Corner: "You can be proud of yourself. You can tell your kids you ran Empire for all of ten minutes." -Lucious to Hakeem.
posted by jenfullmoon
« Previous Episode
« Older Star Trek: Deep Space Nine: In...   |  Last Week Tonight with John Ol... Newer » 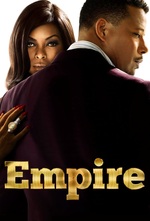