Someone breaks into Vic's car while Boonie's on the hook for unpaid child support.


Lloyd needs a place to sleep and breaks into Vic's car. He then convinces Vic to let him sleep in the cars as 'security'. Boonie has a yard sale to raise money for child support he claims he already paid. Boonie's ex Shalinka shows up at the yard sale to confront Boonie and beats up several people after Maggie throws a shoe at her. Jesus tries unsuccessfully to get Shalinka to give Boonie another chance before involving the authorities. When the police show up to arrest Boonie his kids reveal he wasn't lying about paying and Shalinka and Boonie come to an understanding.
posted by Anonymous (1 comment total)
Still not sure how this is on television. It would be a mildly funny youtube series. It has all the same problems, and they seem to just be trying to add in one liners to get around the stereotypes when they aren't having the characters say 'bitch' and 'nigga'. Jesus never stops being likable, Lloyd has a moment or do doing his standard thing he's done for decades, and Vic's story is followable, but overall this show is still a mess.
posted by cashman at 7:27 AM on September 3, 2014 [1 favorite] 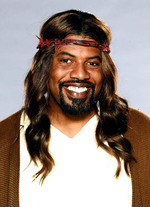